In a strongly worded release, ASIC announced it had found Grubisa – among other things, failed to rectify misrepresentations about holding certain licences when she did not, despite being made aware the representations were false – has a habit of not telling the truth and encouraged her students to use data from the Family Court list for an improper purpose.

Grubisa is appealing the ban.

In the latest version of her Real Estate Rescue webinar (dated July 2022), Grubisa went on the attack.

She claimed those full of fear and ignorance of the law have chosen to deride and ridicule her and those with vested interests are threatening her.

Which vested interests are these?

Is she referring to the CEO of the Australian Restructuring Insolvency and Turnaround Association (ARITA) who in 2019 referred concerns to ASIC regarding the asset protection and business turnaround programs being spruiked by Grubisa?

Is Grubisa instead referring to the Australian Financial Complaints Authority (AFCA) that also referred their concerns about DG Institute to ASIC in 2019?

Perhaps Grubisa is referring to ASIC, who said she has a habit of not telling the truth.

In that, Grubisa went on to claim that regulators had banned her from doing something they agree and know she didn’t ever do. Really?  ASIC has agreed with her?

Grubisa claimed in a webinar in January 2021:

“I’ve also got a Financial Services Licence, so I’m across compliance and that sort of thing.”

Neither of these is true.

DGI Wealth Management Pty Ltd was an authorised representative of Financial Masterplan Pty Ltd (AFSL number 344628) between 27 August 2018 and 11 December 2019. It ceased to have the right to provide financial planning when its representative status ceased. 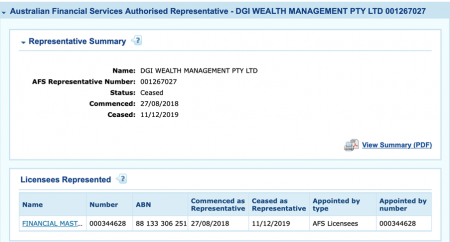 Yet Grubisa was still claiming last year to hold an AFSL herself and that DGI Wealth Management was able to provide financial planning services.

ASIC’s media release referred to the fact that Grubisa represented that she and her company held an Australian Financial Services Licence when neither she nor DGI Wealth Pty Ltd held such a licence.

As we reported in that article, a spokesperson for the Court made the following statement to IA:

‘Going through the process of divorce and other family law proceedings is a particularly stressful period for all separating couples and it would be of serious concern if any court material, such as Court lists, were to be used inappropriately and for commercial gain.’

So concerned was the Court that it referred Grubisa’s conduct to the NSW Law Society and the Australian Federal Police. 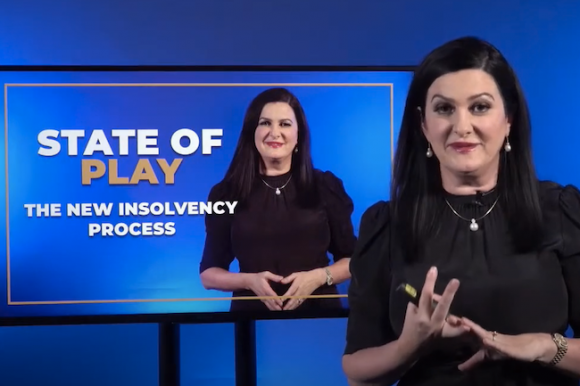 Following the ASIC media release, the Australian arm of international property data firm CoreLogic announced it had severed ties with Grubisa’s business. CoreLogic was not the first data company to do so. As we reported last June, Equifax jumped ship from its dealings with Grubisa’s business regarding the use of credit data as part of her business turnaround program.

Grubisa encouraged her students to target businesses that appeared in the ABR Gazette. This document listed companies against whom judgements had been made by the Courts. Equifax's terms and conditions required this data to be used solely for the purpose of assessment of credit risk as we reported last April.

The Financial Review reported on 21 April that Grubisa’s company sued the Australian subsidiary of CoreLogic, RP Data Pty Ltd, after it cut ties with her.

It seems a quite bizarre way to show thanks to CoreLogic by suing them!

In March of this year, we reported that Grubisa was uploading court data to the platform of software company Archistar. Grubisa markets the Archistar platform as “FastProperty” and as reported in that story, claimed to have “built it [FastProperty] from the ground up”.

Prior to the end of the relationship with CoreLogic, the Archistar platform was used for those who signed up for her higher-priced programs such as “Fast Tracker” and “Elite Mentoring”.

Since the termination of the relationship with CoreLogic, Grubisa has rolled out “FastProperty” to those who sign up for her “Real Estate Rescue” program. This is the program where Grubisa encourages her students to seek out and target those in financial hardship, deceased estates and people who are parties before the Family Court.

Through the Archistar platform, CoreLogic’s data was replaced with access to the Pricefinder subscription service from Domain Group.

On Thursday 28 April, Grubisa ran a webinar as part of new branding for her business — her Property Lovers community. This is part of a significant rebranding of businesses associated with Grubisa.

The law firm of which Grubisa was principal has changed its name from DGI Lawyers to Assure Lawyers. Grubisa is no longer practising as a lawyer. The firm is run by solicitor and director Zeeshaan Nordien. Grubisa’s family retains a 50 per cent stake in the business. The credit business within the DG Institute group of companies also rebranded from DGI Finance to Capital Mortgage Group.

In the April webinar, Grubisa said [at 21 minutes, 20 seconds in], in flogging her Property Buyers toolkit [IA emphasis]:

“We're also going to give you access to FastProperty for the next three months. It is our cutting-edge tool when it comes to research. Knowing your numbers, knowing what's available and finding off-market deals. This didn't exist. We had to create it, especially for our ‘property lovers’ [sic] community.”

‘...if you secure the Property Buyers Toolkit today, you will have access to our patented FastProperty technology which includes all the necessary tools to help you locate undervalued properties across Australia.’

These are false claims. The technology was not created by Grubisa or her business nor does she hold a patent. Archistar’s software is available directly from the company and via other sources such as Real Estate Investar.

A search of the IP Australia database shows no patent applications by Grubisa or her in relation to the FastProperty platform or any by Archistar founders Dr Benjamin Coorey and Rob Coorey.

Innovation patents that Mrs Grubisa, her husband Kevin or her business Master Wealth Control Pty Ltd did hold are all showing as having ceased. None relate to the Archistar technology.

As we reported in June of last year, an innovation patent is not examined before it is granted and is only legally enforceable if examined by IP Australia and found to meet the requirements of the Patents Act 1990.

ASIC says Grubisa has a habit of not telling the truth. That is “patently” obvious.

We can report that Grubisa’s false claims regarding patents she does not hold have been reported to IP Australia.

We can now also report that Archistar and Domain Group have also severed ties with DG Institute.

In a recent statement, a Domain spokesperson said:

And as reported in the Financial Review, Archistar has also not cut ties with her business.

Hopefully, those going through the stressful period of relationship breakdown can also now be spared from this predatory conduct. But there are still sycophantic followers of Grubisa’s business who wish to seek out and target people in relationship breakdown. More about that in a coming story.

Finally, as a follow-up to our story of 8 August, a few days after that article we received an unsolicited message from the founder and executive chairman of the Stevie Awards. That message advised that the Stevie Awards had retroactively rescinded the awards that were conferred on Grubisa in 2018 and 2019, that they had requested she remove all reference to them from her websites and promotional materials and would follow up to make sure that was done.

While Grubisa’s awards no longer feature on the list of award winners on the Stevie Awards website, they are still shown on the DG Institute website. 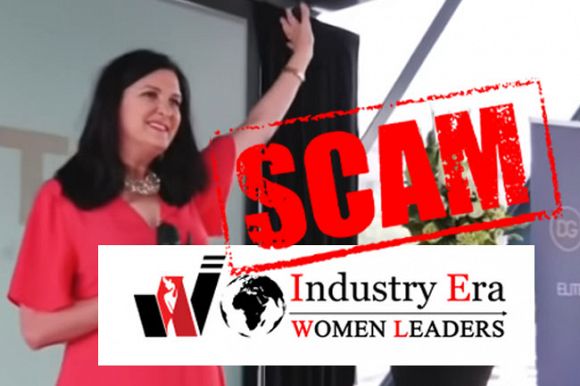