The mainstream media have “jumped the shark”

Victoria Rollison says her disillusionment with Australian media has caused her to turn away from mainstream sources and seek out independent views — including IA.

Anyone who follows me on Twitter will notice that I spend a lot of time bemoaning the disgraceful news coverage offered to us by Australian mass media. #MediaFail is probably my most used hash tag. In recent months, my disillusionment with Australian media has caused me to turn away from my old staple diet of Fairfax and ABC, and has led me to seek out independent views.

Happily, this independent coverage is growing in quality and quantity.

I now read Independent Australia on a daily basis and I also enjoy the amalgamation of quality blogs on The Political Sword. The Conversation is a great place to find critical analysis of topics from politics, to education, to environment, all provided by Australian academics. It has even got to a point where these blogs aren’t just commenting on news that is reported in mainstream media, but are also publishing exclusives. For instance, investigative blogger Peter Wicks, creator of Wixxy Leaks, has contributed thousands of words to Independent Australia, uncovering the scandal that is Kathy Jackson. That’s right. Kathy Jackson is the scandal. Not Craig Thomson. Thomson’s spending on his union credit card is insignificant compared to the scam Kathy and her friends have been running at the Health Services Union for many years. Have you heard about this in mainstream media? Of course you haven’t. Because they have jumped the shark.

The phrase ‘Jumped the Shark’, for those unfamiliar, is “the moment in its evolution when a brand, design, or creative effort moves beyond the essential qualities that initially defined its success, beyond relevance or recovery”. (You can read about the origins of the phrase at Wikipedia). Using the example of the three dominant news press suppliers in Australia – News Ltd, Fairfax and ABC – there’s an obvious reason why these organisations find themselves beyond relevance or recovery. They are completely myopic when it comes to criticising their colleagues in the industry — or critically analysing their own influence on the news they are reporting.

For example, have you ever heard anyone in the mainstream press lament the role of their own colleagues in encouraging Tony Abbott’s negativity to infect consumer confidence to a point where the best performing economy in the world is seen by those within it as a basket case? Sure, there are a few brave souls willing to say that Tony Abbott’s relentless negativity – along with the way the press reports this negativity – is having a detrimental effect on economic confidence. But have you ever heard specifics? Have you ever seen Fairfax’s Peter Hartcher say:


“It’s quite clear that Michelle Grattan is hell bent on perpetuating a rumour that there are leadership tensions in the Labor Party, and though this isn’t the case, Grattan is quite clearly doing this to undermine confidence in Gillard, to the benefit of Tony Abbott.”

This sort of commentary just doesn’t happen. And it doesn’t happen because the ‘in club’ of journalists and management in mainstream media are terrified of stepping outside their own party line and exposing the elephant in the room.

Here’s another example, again using Peter Hartcher from Fairfax. This article from last Friday’s Sydney Morning Herald is actually quite a good one. In it, Hartcher’s basic argument is that Gillard should give up on her Carbon Price Household Assistance Package because Australians have a sense of entitlement so large, they’re never going to be happy with handouts, because they’ll never feel like it’s enough. Very true. Hartcher makes the oft-made comparison of government payments being treated like a bottomless ‘Magic Pudding’. He then goes on to say:


“Somewhere along the way, many seem to have lost sight of the fact that the magic pudding was a fairytale. Australians seem to have taken it as a principle of fiscal management.”

This is a complete cop out. Somewhere along the way? 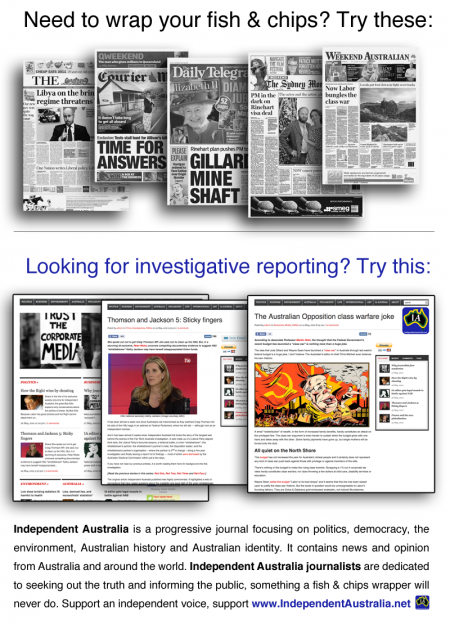 How about Hartcher try this instead:


“Australian voters form most of their political opinions by consuming political news from mainstream media, and messages from our political leaders are reported to the public through a very tightly controlled mass media funnel. The sense of entitlement prevalent in our society has very much been fuelled and fanned by the mainstream media, of which I am a member”.

Hartcher isn’t going to say that though. And he’s never going to criticise Michelle Grattan, his other Fairfax colleagues or any journalist who works for Fairfax’s commercial competitors. They all belong to the ‘in club’ — an impenetrable fortress devoid of self-critique.

Has anyone read anything in relation to Kathy Jackson in the mass media that comes anywhere close to suggesting that she is far dodgier in her HSU dealings than Craig Thomson was — and that the mass media have done a disservice to the public of Australia for not uncovering this months ago?

It’s not hard to see why people like me are increasingly seeking out, and happily finding, independent commentary that isn’t afraid to report news, free of the shackles of phrases like “somewhere along the way”. I look forward to watching this trend continue.

(This piece was originally published on Victoria Rollison’s blog www.victoriarollison.com.)