The kiss of Rupert Murdoch

As British Prime Minister David Cameron will soon find out, says Michael Collins, doing business with Rupert Murdoch can often be the kiss of death. 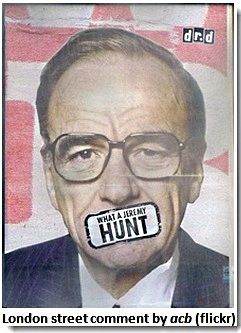 When things don't work out, doing business with Murdoch can be the kiss of death.

No matter how hard you try, how loyal you are, if something goes wrong, you can be sure it will be your fault.

Reporting has failed to lay the proper foundation for understanding Rupert Murdoch's remarkable testimony before the Leveson Inquiry in London and his behaviour of late.

Rupert Murdoch is a nihilist.

Murdoch’s television outlets in the United States stoked the fires for the 2003 invasion of Iraq based on outrageous misrepresentations — like the idea that Saddam Hussein was responsible for the 9/11 attacks. The war cost tens of thousands of dead and seriously injured U.S. soldiers, several hundred thousand dead Iraqi civilians, and $3 trillion.

Last summer, Murdoch went full throttle to support Republicans in the U.S. Congress as they fabricated a debt ceiling crisis that seriously damaged the credit rating of the United States of America.

Murdoch’s support of the Tea Party created an utterly irrational voice in U.S. politics that prevents even the most modest necessary reforms. Created by right wing lobbyists, this pseudo party blocks every vital project, from reviving the economy to an effective, coordinated, response to the crisis created by climate change.

In the nations occupied by his multinational media empire, Murdoch takes the path of maximum damage to the public and governance.

It was appropriate for the House of Common's culture, media, and sport committee to find on May 1 that Rupert Murdoch was 'not fit' to lead a major international company.

Where were they and the majority in Parliament over the past three decades, while Murdoch exceeded all limits or propriety and civility, trashed the political system in Great Britain and elsewhere, and dragged down the level of public dialog and governance to record lows?

The Leveson Inquiry (the inquiry) was established on July 13, 2011, just nine days after the Guardian's Nick Davies broke the story of Murdoch's tabloid News of the World hacking the voicemail of deceased kidnap victim Millie Dowler. Prime Minister David Cameron had no choice but to bow to a furious public and appoint an inquiry.

Headed by the distinguished jurist Lord Justice Brian Leveson, the inquiry is examining "the culture, practices and ethics of the media". It seeks to answer the question: "Who guards the guardians?" The inquiry began hearing testimony last November.

It was just last summer that Rupert and son James testified confidently before a House of Commons committee. The Murdoch's seemed in control of the MPs, many of whom had spent years grovelling before Murdoch and his News Corporation media executives.

Last fortnight’s Leveson Inquiry hearings were entirely different. Father and son Murdoch were questioned for hours by a professional prosecutor. Unlike the July 2011 appearance at the House of Commons committee, their testimony was integrated with substantial evidence, carefully gathered and presented to the public before the hearing. The Leveson Inquiry produced a 160-page pdf of emails, featuring Rupert Murdoch, James Murdoch, and Frederic Michel, News Corporation's ubiquitous lobbyist.

What did we learn about Murdoch's treatment of the British people and system of government?

The high points were Murdoch's show of contempt for the political process and of his hyper focus on obtaining approval for the acquisition of remaining shares of the BSkyB (Sky) pay TV network. News Corporation already owned a controlling interest in Sky, 39%.

[For the importance of the Sky acquisition, see Rupert watch - signalling the end, Michael Collins.]


Contempt for the political process

Murdoch installs and topples British governments at his discretion, using the power of his media properties. Despite steadfast support for PM Tony Blair and New Labour for over a decade, Murdoch abruptly switched his allegiance to David Cameron's Conservative Party in 2010. That change was a major factor in the defeat of Blair's successor, then-PM Gordon Brown.

David Cameron's public courtship of Murdoch was without shame. In May 2007, as Conservative opposition leader, the future PM hired Andy Coulson as Conservative Party communications director at the suggestion of Rebekah Brooks, a Murdoch insider and executive. Coulson was former News of the World editor who was up to his neck in phone hacking, about which he misled Parliament's early inquiries.

In November 2008, Cameron wrote a column for Murdoch's favourite tabloid, The Sun, attacking BBC’s leadership and its licensing fee. He said:


"It’s become bloated with many of its executives overpaid."

He also insisted on reduction of the fee, a move that would curtail BBC revenues and the network's ability to compete with Murdoch's media properties.

A few month later, in July 2009, Cameron gave a major policy speech in which he set his sights on Murdoch's number one regulatory nemesis, Ofcom, the British media regulatory agency. Cameron signalled to Murdoch what would happen to Ofcom and the identity of the Conservative MP likely to become secretary of culture, media, and sport.


"Jeremy Hunt has concluded that OFCOM currently has many other responsibilities that are matters of public policy. So, with a Conservative Government, Ofcom as we know it will cease to exist."

The attack on BBC and plan to strip Ofcom of its powers, placing them in the hands of a sympathetic cabinet secretary ("Jeremy Hunt has concluded") were Cameron's way of saying that he would play ball with the head of News Corporation. It was part of Cameron's public audition for a role as a highly placed lackey.

Mr Hunt made a fateful visit to News Corporation headquarters in New York City in August, 2009. He said he spent five days studying local television. Last week, Murdoch testified that at this time he and son James were fine tuning the decision to buy the remainder of Sky shares. Did Hunt indicate that a Cameron government would green light the Sky acquisition at the New York meeting?

Shortly after Hunt's mission, James Murdoch, then chairman of Sky, met with Cameron, promising Murdoch support for Cameron’s bid to become prime minister. Cameron did become prime minister after he formed a coalition government in May 2010. He appointed Hunt secretary of culture, tried to pair back Ofcom, and froze BBC's licensing fee for several years. As inquiry evidence showed, Hunt delivered on the biggest action item -- support for News Corporations acquisition of the remaining shares of Sky that it didn't already own.

The incriminating emails start in June 2010 and run through February 2011. Smith provided a blow-by-blow description of Hunt’s efforts as well as previews of upcoming decisions. Michel fed Smith instructions and got confirmation when they were implemented.

Exclusive: Hunt on the brink as he is accused of misleading Parliament

From evidence and testimony by Rupert and James Murdoch the week before last, it is abundantly clear that Hunt concealed his agent relationship on behalf of News Corporation. The culture secretary withheld evidence from Parliament, as illustrated by the emails presented before the Leveson Inquiry. Those emails were not in his submission to Parliament. Nevertheless, they exist.

PM Cameron is also in hot water for not appointing an independent investigation of Hunt. After the testimony and evidence of the hearings, there is zero doubt that Hunt is a bad actor. The worse he looks, the more pressure will mount on Cameron to justify his failure to investigate Hunt's failures.

Fly too close to the media Sun King and your wings melt, then you crash and burn.

Jeremy Hunt's position is simply indefensible. He withheld evidence in his possession — evidence critical to Parliament’s responsibilities. The evidence (emails) showed up at the inquiry recently.

When the evidence of Hunt's agent role for Murdoch came out, Hunt appealed to Lord Justice Leveson for an earlier appearance at the inquiry to clear his name sooner. The inquiry issued a statement saying that "in the interests of fairness to all" there would be no change in the schedule. Why? Because the inquiry is not about ministerial conduct — Hunt's, or that of any other Cameron minister.

As clear as this statement from the Leveson Inquiry was, Cameron continues to insist that the inquiry is the best forum to evaluate Hunt's actions. This signals the beginning of the end for Cameron. He's proposing a solution for the Hunt investigation that is outside the rules of Parliament, in a forum that has rejected him. Upon closer examination, existing evidence will lead to even stronger condemnation of Hunt's behaviour. Any new materials produced by the inquiry will bury him.

Where will that leave Cameron?

Doing business with Rupert Murdoch is the kiss of death.

An interesting exchange occurred during testimony by James Murdoch under questioning by Queens Council (QC) Robert Jay on April 24. QC Jay noted that the email (below) from News Corporation lobbyist Frederic Michel to James indicated that "absolutely illegal" behaviour was employed to get government plans regarding the Sky acquisition. James brushed this off with a smile claiming that the greater than symbol and explanation point indicated that "it's a joke."

A.     James Murdoch: I thought it was a joke. I think the little – the "greater than" and the exclamation point there, or wink – it's a joke.

Q. Robert Jay, QC: Is it? It was absolutely illegal in one sense. It's completely unethical, wasn't it?

What emoticon is Murdoch talking about? The email above is a copy of an email sent from Michel to James Murdoch. James Murdoch says that the symbol >! is a "joke" or indicates a "wink." The following combinations of the supposed emoticon written by the Murdoch lobbyist don't seem to exist: >! - >!] - ..>!]

The alternative explanation is more consistent with the behaviour brought out by the Leveson Inquiry. QC Jay is correct. The text and symbols refer to "absolutely illegal" behaviour. In light of that, Frederic Michel's symbol ..>!] may be a means of exclaiming the highly illegal method of acquiring the information from the government source.

Was absolutely illegal phone hacking employed to obtain information from the offices of Jeremy Hunt or other Cameron ministers?