The coming end of the Murdoch empire

Recent events surrounding Rupert Murdoch and the UK phone hacking scandal show no sign of letting up, former News Limited executive Rodney E. Lever gives us an insight into the man and explains why his power is waning. 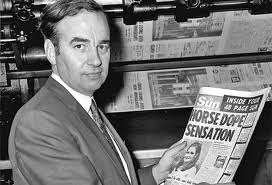 I HAVE A VERY CLEAR recollection of a day many years ago when Rupert Murdoch called his senior executives together.

He owned only a small group of newspapers and magazines at the time. He sat at his desk waving a bundle of screwed-up papers in his hand.

"Look at this!" he yelled, as he waved a document.

"Would you believe this? Look at this crap!"

Bits of paper flew out of his hands. We never knew what was on that particular piece of paper.

Intimidation is a tried and true technique of bullies. Rupert seemed to think it impressed people. Adolf Hitler used it.

I had a way of staying calm on these occasions. As a reporter, I always considered myself as an observer, not a participant. It was a way of keeping my sanity.

Rupert has two favourite words: "crap" and "bullshit". He uses them all the time. That day he was using both.

I looked around the room. My colleagues were white faced, wondering what the devil he was on about now.

It turned out he had gone to the accounts office and collected all the reporters’ current expense slips. These are claims that have to be filled out to justify tram or taxi fares, entertainment expenses (buying a contact a drink or lunch) and no doubt other things that the creative minds of professional journalists were good at conceiving. We were occasionally asked to explain them if they were too high.

A newspaper could no more exist without expense accounts than it could without printing presses. Senior executives usually checked expense accounts regularly, but perhaps not always as thoroughly as they should.

A question for the judges at the coming trials of Murdoch’s British staff in the Old Bailey will be whose money was used for bribes: the reporter’s, or Murdoch’s.

British politicians appear to still fear this old man, whose power is diminishing every day. Such fear in the country of Henry VIII, Elizabeth I, and Winston Churchill is astonishing.

Churchill coddled newspaper magnates and was a journalist himself for a time. However, he never gave them the slavish sense of importance they seem to enjoy today, when the print media is struggling to survive.

Britain built the greatest empire in history and then lost it all in one war. Now one man has given the country cause to reflect carefully on its own past and the future.

There is a big difference between fiddling expense accounts and handing out bags of money to policemen and public servants.

Britain recognised this a century ago and the government introduced specific laws to make it illegal. Other governments around the world, including Australia, have done the same.

The British government is essentially at fault itself, seemingly forgetting that its own law existed — until the Murdoch newspapers began to bite them through unrestrained phone hacking and bribery.

There is fault within the British media too. Murdoch – owning a third of the print media – had apparently never been briefed on British law. Neither, apparently, had any of his staff until they were dragged from their beds and arrested.

The law surely applies as much to the higher levels of government as to the plodding policeman on the street? The policeman thinking he could buy the kids something special for Christmas by taking the opportunity of a bribe from a news reporter mate for good story tip.

The key issue for the Murdoch staff trials will arise in a few weeks. It will centre around whether the reporters paid bribes as agents for the company or whether they were supplied with cash by their employee for a specific purpose.

Either way, it could incriminate both. A plea based on Queen’s Evidence would help the employees avoid a long term of imprisonment, but would they ever get another job?

I doubt Rupert Murdoch will appear again before his political inquisitors, as he has voluntarily agreed. His lawyers would advise him not to. He cannot say anything that might tend to incriminate himself or others. Any slip of the tongue could be dangerous for himself and his staff. The recent tapes suggest he is prone to this.

Murdoch, himself, has no real power left. His newspapers in Australia and elsewhere are tip-toeing around the events in Britain. What is a major story in other parts of the world are not fully covered in the Murdoch papers.

Newspapers that continually censor news in their own personal interests never last long.

According to private comment obtained from sources close to Murdoch by outstanding UK investigative website Exaro, Murdoch apparently feels "hurt" his employees leaked his comments to the press. Read the Exaro article here. And for another view on how much trouble Murdoch is in, read this.