EXCLUSIVE: Sleeping Giants awake and rise up against Sky and News Corp

A small group of social media activists is irritating Australia’s biggest media monopolist by targeting its advertisers. Political editor Dr Martin Hirst takes us inside the Sleeping Giants lounge room and onto the couch.

THE anonymous online group, Sleeping Giants Oz, has this week come to the attention of conservative News Corp columnists and Sky News TV hosts, who fear they may lose their salaries if advertisers continue to pull away.

The Daily Telegraph columnist and Sky News reporter, Caroline Marcus, is the latest News Corp drone to join in.

BREAKING NEWS: You did it again GIANTS this time you are all Americans, agitators against that well worn excuse for open racism "FREE SPEECH".🤔🤣😂

THANK YOU every one of you for what you are doing to promote a civil society❣️✊🏼✊🏾✊🏿✊✊🏻✊🏽📣#Auspol #NotMyAustralia pic.twitter.com/GgoVIEpI6J

Sleeping Giants Oz is an Australian offshoot of a U.S.-based group, and its mission is to politely and respectfully ask companies to withdraw their advertising dollars from news outlets, online and on television, that promote racism, misogyny and general bigotry.

In the last week, Herald Sun columnist and Sky News commentator Andrew Bolt has also jumped into the fray. Bolt used his newspaper and television appearances to whinge about how unfair it is that Sleeping Giants – using simple but persuasive approaches via social media and email – are convincing advertisers to pull their money from the Sky News network,

BOLT: The Victorian Government today announced a political ban - on Sky News. A political ban by a government with a lot to hide. #theboltreport @SkyNewsAust

And the simple reason that Sky News and News Corp heavies are worried about Sleeping Giants group is that it is effective.

In the United States, the group’s ongoing campaign to get advertisers to pull their ad spend from the Breitbart website has resulted in over 4,000 successful requests. In many cases, advertisers are booked onto Breitbart and other sites because they use Google AdSense or other forms of what is known as programmatic advertising, which is largely automated. The advertiser doesn’t necessarily know where the ad is going to be placed.

However, when Sleeping Giants alerts them to the types of distasteful content their advertising is supporting, in many cases, they pull back, willingly. Sleeping Giants then explains to the company how they can block their ads from appearing on hate sites or next to racist content online.

This kind of social media power and activism is very frightening to the conservative shock troops at both News Corp and Sky. It is the simplicity of the action that they also find unnerving. How dare ordinary people take action that affects the bottom line of hate-mongering elites? is their default response.

Anyone can become a Sleeping Giant activist and (as I show in this Twitter Moment) many people join in their campaigns, from the comfort of their couches. The collective maintains an FAQ page that shows just how easy it is.

IA wanted to know more about Sleeping Giants, given all the fantastic fuss they’ve been causing this week.

IA: Why did Sleeping Giants establish in Australia, and when?

SLEEPING GIANTS: Back in early 2017, I saw a BBC article on how Alex Jones from InfoWars was telling people that the Sandy Hook massacre never happened, I was really incensed and it didn’t seem to be getting any coverage in the I tried messaging U.S. activist groups on Facebook to try and raise awareness and nothing happened. I was bemoaning this lack of response to a friend in the U.S. and they suggested contacting Sleeping Giants, so I sent them a message and they were the first group to take an interest.

There were already some people in Australia who were getting behind Sleeping Giants, so I took a look at what they were doing, what they were trying to achieve and thought we need something like that, the Australian media is going virtually unchecked, why not give it a try.

IA: You’ve had some successes here, what are the highlights so far?

SLEEPING GIANTS: Clearly the last few weeks have been spectacular, but we have been toiling away under the radar for the past year. Every time a company said no to Breitbart was so thrilling. It's interesting that companies will respond with great willingness to block their ads appearing on Breitbart, but are reluctant and blind to similar speech in Australian based media.

Vinomofo was the first company to remove their ads appearing with any Andrew Bolt articles after their ad headlined an article where he said marriage equality would cost us free speech. We all danced and there was much fist pumping.

The response to both the Outsiders Sarah Hanson-Young comments and the Channel 7 "African Gangs" segment were outstanding, but the culmination of months of simple hard work and persistence.

IA: Tell us a little bit about how the group/collective is structured.

SLEEPING GIANTS: We have a tight-knit group: some do research, some do social media and manage our "presence" — otherwise it's all about Giants. Its people joined together with a common goal — we, all of us, are just looking for the debate to be civilised. You can discuss any topic without the discourse rising to vilification.

We are a simple mechanism of monitor, report and activate. There's no money. Our volunteers pay for their own subscriptions to enable them to participate. Those that can't afford subscription fees do other things, like spreadsheets and manning the keyboard.

We have a set style, where we try to make sure everyone who participates and leaves a comment is acknowledged. We make sure the Giants know the results are theirs — that they own the success. We don’t tolerate bullies, our own, or those just passing through to make a nasty comment and we always ask people to be respectful.

IA: Do you generally get a good response from companies you reach out to?

SLEEPING GIANTS: Apart from the Breitbart notification, we rarely get a response, but we are always monitoring to see where companies are dropping away from print and online publications. Television is more difficult, but no CEO wants to see his company's ads sitting next to an article designed to create division in our country — we refuse to believe that.

IA: Have you had any companies be abusive or try to shut you down?

IA: Tell us about any responses you’ve had from Channel 7 and/or Sky over campaigns directed at them.

SLEEPING GIANTS: Until today, we've never heard from anyone. Today a Sky reporter posted how ridiculous it was becoming.

[It appears the tweet referred to above, posted by Thomas O’Brien, a Sky News reporter based in Canberra, has been taken down.

Fortunately, we have a screenshot (below). We asked O'Brien why the tweet had been deleted but have not yet received a response.] 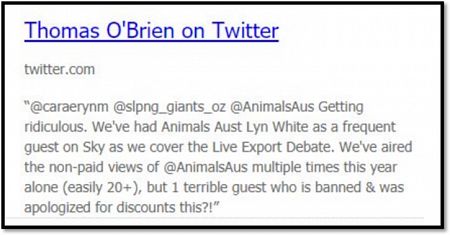 IA: What is the philosophical basis for Sleeping Giants?

SLEEPING GIANTS: Sleeping Giants Oz has (among others) led a campaign to elevate public awareness and action to bring about change in the level of discourse in the public arena.

Sleeping Giants Oz is part of a community-based organisation led by volunteers in 15 countries, with the purpose of encouraging advertisers to avoid associations with publications and media organisations that publish and broadcast hate speech, racism, bigotry and sexism.

Whilst it is not our aim to discourage healthy debate, expression of opinion and freedom of speech, we don’t believe these freedoms should extend to the level of hate speech and misogyny without challenge.

Here in Australia, we are also really focusing on encouraging the advertising industry to be a leader in this space. Many companies rely heavily on their agency to make decisions about placement and, if your agency isn't protecting your brand, and you are not monitoring it, you can find your company ad being aired during the break when Sky News is interviewing a Nazi.

IA: How many campaigns have you run now? If you keep statistics, can you share some of them with us?

SLEEPING GIANTS: We are in campaign mode all the time and it depends on what is coming up in the media, Breitbart is always there and companies are always getting caught out by the programmatic nuances. So far, 149 companies have blocked Breitbart from notification out of the Australian Sleeping Giants community.

Luxury Escapes, Amex Australia, Huggies and Specsavers are all publicly off Sky. Also, we did the comparison from Monday night’s scheduled ads and Tuesday night’s, and it went from 47 individual brands/companies down to 26, overnight, back up to 32 last night — but with new entrants.

The very first was Balsalm Hill who just pulled all their ads from Sky News across the board after the Sarah Hanson-Young program, followed by Scenic, Citi, ANZ, NIB, Bayer (ANZ), UBANK, for the Outsiders program.

Having said that, during the last Outsiders show, they were down to eight companies advertising during a two-hour show — four of which were new entrants we hadn't recorded before. One was Luxury Holidays, who withdrew the next morning.

Let's not forget Winning Appliances from the Channel 7 "African Gangs" segment. You know, one Giant actually ordered a fridge from them and sent us his purchase number, and then sent a picture when it was delivered.

The backlash has begun

It is no surprise that the News Corp columnists are out earning their pieces of silver this week, putting the boot into Sleeping Giants.

Coincidentally, they are also now defending Sky News’ decision to air an interview with convicted Nazi criminal Blair Cottrell. You see, according to their logic, giving a Fascist a platform without challenge is okay because it is part of the great "chewing the fat" process — you know, “free speech ‘n that”.

Of course, this just emboldens the Alt-Right nutjobs like this “Proud Boy” (above) who doesn’t realise that his intervention actually proves the point that Sleeping Giants was making in the first place. 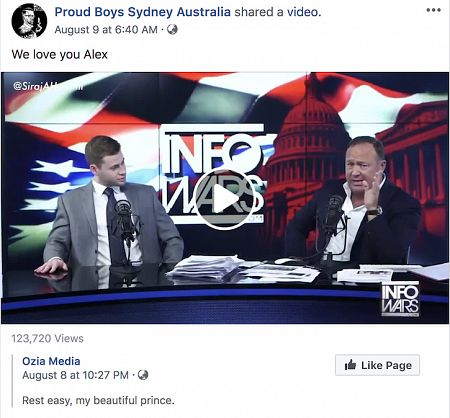 In case you missed it, the Proud Boys is a gang of Alt-Right and men’s rights “activists” who don’t like immigration or shouty women, but they love Alex Jones and InfoWars.

Yes, this is the kind of mob that Caroline Marcus and the boy with the chin-merkin think should be allowed to appear on national television to “respectfully” defend their racism and misogyny.

Sleepers awake — and all power to your tweet fingers.