A secret tape recording of a meeting between Rupert Murdoch and arrested Sun journalists, obtained by UK investigative website Exaro, shows a far from humble Murdoch admitting to knowing about ‒ and effectively sanctioning ‒ corrupt and illegal practices at his British newspapers. 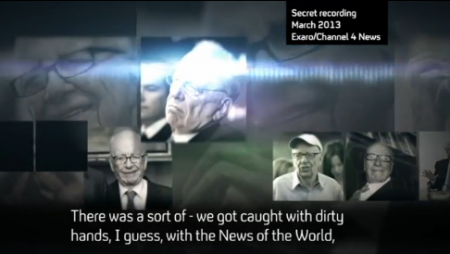 The following is an excerpt from a transcript of this meeting prepared by exaronews.com:

Unidentified Sun journalist: “You referred to, you used the phrase, things were done on The Sun for over 40 years. I personally have been here for less than ten. But I’m pretty confident that the working practices that I’ve seen here were ones that I’ve inherited, rather than instigated. Would you recognise that all this pre-dates many of our involvement here?”

Rupert Murdoch: “We’re talking about payments for news tips from cops — that’s been going on a hundred years, absolutely. You didn’t instigate it.”

“I remember when I first bought the News of the World, the first day I went to the office… and there was a big wall-safe… And I said, ‘What’s that for?’

“And they said, ‘We keep some cash in there.’

“They said, ‘Well, sometimes the editor needs some on a Saturday night for powerful friends. And sometimes the chairman [the late Sir William Carr] is doing badly at the tables, (laughter) and he helps himself…’

“Now there was a law passed against this in 1906. That’s when it was first recognised as a problem. The previous chief of public prosecution, who we hired for a few days then he realised it was too embarrassing, he had to give it up, [Lord] Macdonald. He said he knew that on Fleet Street there were payments made, and he decided not to go after it because it was all too petty – and too complicated. The idea that the cops then started coming after you, kick you out of bed, and your families, at six in the morning, is unbelievable.”

Sun staffer: “I’m [redacted]. I’m the [redacted], and have been for the last decade. [Redacted.] This is the only paper I’ve ever worked for, the only national newspaper. Would it surprise you to know that the first time I heard of the 1906 Misconduct in Public Office Act was when I was arrested? No one had ever told me about that. I’d never seen-”

Sun staffer: “The first time I heard about the 1906 Misconduct Act was when I was arrested. No one had ever told me about this in this company-”

RM: “The first time I heard about it was a couple of weeks ago, but go on.”

Sun staffer: “So, completely oblivious to the fact that the long-term practice of this company to pay public officials was illegal, my job description meant that as a result of that, it came directly through my particular department [redacted]. You can understand how we all feel that we are effectively being made scapegoats.”

RM: “Yeah. And one of these high-priced lawyers would say it’s our fault, but that situation existed at every newspaper in Fleet Street. Long since forgotten. But absolutely. Do you think you will be charged, in your case?”

Sun staffer: “[Redacted.] My lawyer- he says no one can tell in this particular situation, but we are caught in the middle of a perfect storm in many ways. You’ve got a police force desperate to make up for previous mistakes. The MSC continue to hand over information on each and every person in this room-”

Sun staffer: “In which case the police are using the databases that they have been given-”

RM: “I know. Kathleen Harris, the lawyer, has told them to stop doing it, because they’re lying.”

Sun staffer: “Well, they have, they’re putting vast amounts of evidence in front of me, dating back an entire decade, since I took the job as [redacted]. Expenses forms, notebooks- And, as I say, the first time I was aware that [redacted] was on the day they arrived at my house completely out of the blue and arrested me – 14 of them – who went as far as to use cameras to search under the floorboards of my flat to see whether I had been stashing illegal information.”

RM: “I mean, if it wasn’t so sad and so terrible, it would be laughable. But if your lawyer puts that- You won’t get any help from judges – but, I think, juries. I’ve got – not absolute faith – but a lot of hope in juries. I think you’ll all make fine witnesses. And you want a lot of help from your lawyers, and practice. Because your juries are your best hope.”

4 July 2013, 12:01pm A secret tape recording of a meeting between Rupert Murdoch and arrested Sun ...
Join the conversation
comments powered by Disqus
Daily news
Get FREE daily updates from IA to your inbox.
Just in
SHOP AT IA