If there's a welfare system out of control, it's the corporate welfare system with the Big Four picking up +$2.6 billion from the taxpayer over the past ten years. Michael West and Geordie Wilson report.

THE NUMBERS are staggering. The Big Four accounting firms have picked up at least $2.6 billion in fees from the Australian government over the past ten years.

Last week, before the National Press Club, Minister for Social Services Christian Porter unveiled a PwC report which put Australia’s “future lifetime welfare cost” at $4.8 trillion. No matter they confected the highest number they possibly could to scare the daylights out of people, when it came to those dastardly welfare bludgers, the die had been cast.

The Murdoch press and the TV ran long and hard with welfare bludger stories. The narrative was in train. It was lifters and leaners all over again. All that was needed was the imprimatur of a Big Four accounting firm to ennoble the assault on poor people.

“The messaging is that if you are a pensioner,

you are a bludger too, an old bludger.”

PwC gets $365mil of taxpayers' finest then does report for govt on welfare bludgers. Now THAT'S corporate welfare https://t.co/qmF8FaKnJF

This is not to say welfare reform should be ignored. There is fat in the system; and entrenched welfare dependency which passes from generation to generation. But there there is more fat elsewhere.

When it comes to leaners look no further than PwC itself which has picked up $759,736,134.06 over the past ten years from the Commonwealth – almost $760 million in taxpayers' money – for doing reports, providing advice, paper shuffling.

It is KPMG though which takes first prize in the corporate welfare stakes, strapping on $934,351,772.48 of the taxpayer’s finest, clipping almost $100 million a year, leaning like a test rugby pack.

All four have been big donors to the major political parties. All four are the architects of global tax avoidance. All four, while sermonising to government on tax policy, are busy advising their multinational clients how to skulk out of paying tax. 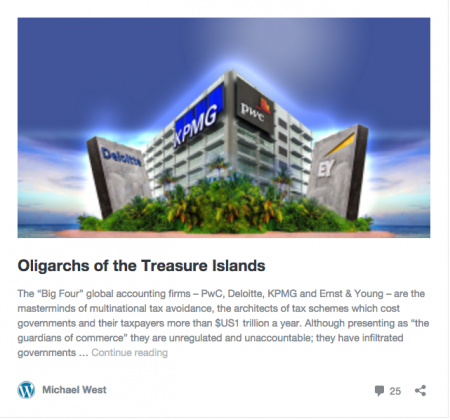 If there is a welfare system out of control, it is the corporate welfare system. The “future lifetime welfare cost” – to borrow PwC’s frilly metric – of the Big Four’s tax chicanery dwarfs the cost of those darned dole bludgers. We might as well just independently estimate it at a gazillion right now … on a PwC “future lifetime” basis.

Others have fairly made the point that there is some good stuff in this report — and surely there is. It’s just that the double standard at play is so profound that it is hard to take seriously.

“What made PwC such an expert on welfare bludgers anyway? Maybe somebody at PwC knows somebody who has a relative on welfare, or they might pass one on the way to lunch”.

Another annoying thing about the welfare narrative, not the PwC report per se, is that it bundles up aged pensioners, families and the disabled in one swoop. The messaging, whether intended or not, is that if you are a pensioner you are a bludger too — an old bludger.

Looking at the actual numbers, rather than a “future lifetime” number, the social security budget this year has the aged at $63 billion, families at $37.6 billion, the disabled at $33.4 billion and the unemployed at $10.5 billion.

A couple of points on the Big Four corporate welfare figures: these are Commonwealth figures only. We are yet to get to the states. Stay tuned. It is a frightening proposition.

The Federal statistics are available through the Australian Government’s procurement information system. Through the online application Austender’, published commonwealth contract notices can be searched. We did a search by Australian Business Number (ABN) of all contracts in the ten years from 1 September 2006.

The payments to each of the Big Four individually within each contract were then totalled manually. Unfortunately, or conveniently, depending on your perspective, the website doesn’t provide totals. 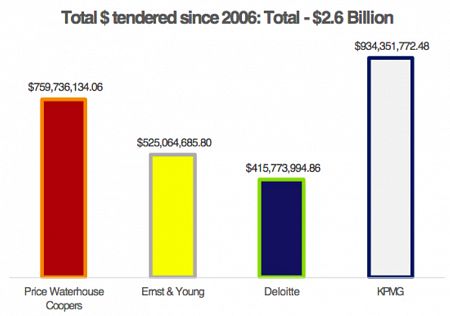 The Big Four have picked up $2.6 billion in fees from the Australian government in past ten years. (Graph per Geordie Wilson).

The only subsidiary business number that was included in the search was that of Deloitte’s Access Economics. As the Big Four global partnerships operate with multiple associated entities in more than 100 jurisdictions, the actual amounts handed out in contracts over the previous ten years may be far higher if other entities have been awarded contracts too.

This article was originally published on 27 September 2016 on michaelwest.com.au and has been reproduced with permission. You can read more from Michael on his website and follow him on Twitter @MichaelWestBiz. Co-author Geordie Wilson is a student and policy consultant based in Perth @Geordie__Wilson.

Lifters and leaners. But do go on, @cporterwa about unemployed and dsp recipients https://t.co/nCO9FrpHyE