Mike Dowson reveals how the latest report from the Australian Productivity Commission reads between the lines as neoliberal policymaking.

PRODUCTIVITY IS a useful measure. It tells us how much of value we can produce with a given input of capital and labour. Generally speaking, more is better.

In industry and agriculture, productivity has often been the immediate yield of technological advancement. It’s been said there’s no free lunch but the more we can harness science and engineering to make lunch for us, the closer to free it should become. Less labour cost goes into it and the saved labour time can be used for other things.

One might reasonably expect an entity called the Australian Productivity Commission to be primarily concerned with this form of progress. But the Commission’s Workplace Relations Report, tabled in final form this week, doesn’t offer a lot of insights into productivity. One thing it does recommend is making some kinds of employment more attractive to business through lower wages and reduced job security.

Depending on your view, this may or may not be a worthwhile goal, but what does it have to do with productivity?

The cost of labour and labour productivity each represent entirely different measures. Technology has an effect on both of them but at the moment, it’s easier to see its effect on labour cost than its effect on productivity, which seems to resist dramatic improvement. 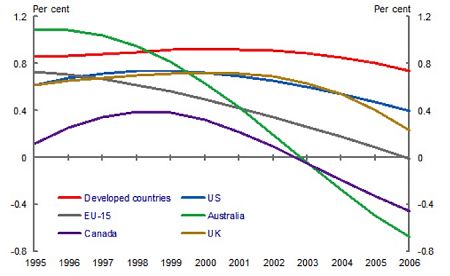 “Jobs” has become the mantra of the media spin cycle. Almost any policy or business venture can be justified if it promises jobs. Despite this, or perhaps provoking it, actual jobs are disappearing, often replaced by technology. More roles are being casualised and real wages over the long term are falling.

The Productivity Commission seems to be recommending we cooperate with this trend. If we put aside actual productivity for a moment, how does it help us to have more people working in insecure arrangements for lower wages?

Fewer Australians can now afford to buy a home. Homelessness is on the rise. According to the Australian Council of Social Service (ACOSS), over two million Australians are living in poverty. Around one in ten Australians – including children – aren’t getting enough to eat. Yet this is a rich country. Will lower wages and less job security help us fix these things?

An answer seems to naturally spring to mind, doesn’t it? Jobs. It’s what we’ve been trained to think when questions of this kind come up. If we want quality of life, we need a strong economy. To do that – the argument goes – we must get more people into work. To make hiring more attractive to employers, we must have more flexibility of employment, which means – apparently – sacrificing pay, security and benefits.

Because technology has made agriculture more productive, we are able to grow more than enough food. In fact, every day we throw away enough to feed everyone who is hungry. If children don’t eat enough, it’s not because there isn’t enough food, but because their parents can’t afford it. As the productive economy is gradually automated, more people find themselves without the means that a good job once afforded them.

Meanwhile, other people are paid a lot of money to do things that are hard to automate. Many of them are also of questionable value, like inventing sugary treats to market to children. The companies that do this also pay dearly for lobbyists, public relations specialists and legal consultants to promote and defend such practices.

If those of us whose skills are still in high demand worry about what our own children eat, it’s probably about them eating too much or the wrong things.

Can Australia balance its need to increase #productivity against concerns over rising income inequality? http://t.co/rnisn9myMo #ausbiz

The Productivity Commission’s report does not address productivity. It addresses employment. More casual low-paid hospitality staff means less welfare and more tax revenue. Instead of the unemployed placing a burden on the affluent through the tax system, they can serve them breakfast on weekends.

As journalist and commentator Alan Kohler suggests, this trend is one reason why overall productivity stubbornly refuses to rise. Productivity returns are highest in capital-intensive industries like mining and manufacturing and lowest in labour-intensive ones like hospitality and professional services. As people move from the former to the latter, the gains in one are offset by increased participation in the other.

As more human capacity is freed up, it’s not necessarily being directed to the things people really need – and not to the people who need them most – but to the things businesses and people with high disposable incomes are inclined to consume.

Is this how it has to be? What is it that mandates this arrangement? Here are three factors.

The first is a difference in the way we have been conditioned to value different activities. Looking after children, the incapacitated and the elderly used to be done by women without remuneration. Now, increasingly, it adds to our taxation, reducing the amount we can spend on other things.

Much of the time, others are consuming the services we are paying for. Care professions are by definition, labour-intensive. As demand for them rises, so does cost. When we contemplate our tax bill, it may be easy to imagine that health and education systems are riddled with waste.

Marketing junk food to children, on the other hand – and persuading legislators to shout, “jobs” whenever the ethics of this is questioned – may be hugely expensive but we only pay for it when our children pester us for a treat.

Of course, there is a hidden cost to this transaction. The more of these products are consumed, the research shows, the more sick adults we end up with — but that cost is deferred to the underfunded health-care system of the future.

The second factor is the shrinking value of labour. For centuries, people who didn’t have land, factories, capital or secret knowledge only had labour to contribute. As long as labour was in high demand, living standards for workers rose.

Labour isn’t in such high demand anymore. Thanks to globalisation and the mechanisation and partial automation of our productive economy, people with assets and capital are less inclined to pay dearly for labour. Which brings us to the third factor.

Inequality is rising. Fewer and fewer people own the lion’s share of assets. As academic Satyajit Das points out, inequality actually constrains investment in the productive economy. The poor tend to spend everything they have, while the rich tend to accumulate and speculate.

Productivity becomes less relevant when wealth is concentrated and labour is cheap. Instead, the conversation turns to austerity. Even if the pie gets smaller, which it may be doing even now, the wealthy still demand a return from their assets — in other words a bigger slice. Life could get tougher for a lot of people.

As traditional jobs disappear, what will we do? Cut back on social services? Push more people into a low paid service economy? Isn’t that just recreating a class system?

Instead of the almost free lunch, technological advancement is facilitating a feast for a few and famine for increasing numbers of others, with people in the middle just trying to hang on to their plates.

Another option might be to adapt the way resources and rewards are allocated – to support a life of dignity and purpose for everyone – while we use our massive technological advantage to attend to the actual needs of our societies. Too good to be true?

Robots contributing as much to US economy as railroads did in 19thC & highways in 20thC https://t.co/PjpIFA2ypo @LSEpoliticsblog #EconHis

Be informed. Subscribe to IA for less than $5 a month.

A Universal Basic Income will work

17 February 2019, 7:00am Remembering how the Government assisted those in need decades ago, it's apparent ...
Join the conversation
comments powered by Disqus
News updates