Daily Telegraph: If you're going to ridicule research do your homework

The playground bullies at Rupert Murdoch's Sydney comic book have taken to ridiculing academic research without having the foggiest idea what it is about. UNSW Professor Rob Brooks reports.

SYDNEY'S DAILY TELEGRAPH is suffering one of their frequent relapses into frothy-mouthed panic about government wastage on research grants. Poking at layabout academics for "wasting" tax dollars on seemingly frivolous projects reminds me of nothing more than the schoolyard bully who secretly knows he peaked in year nine. Yesterday, the Tele flattered me by holding up one of my own projects for ridicule — ironically illustrating their point that rusted-on ideology and patronage provide the most direct route possible to mediocrity.

In an "Exclusive" Natasha Bita goes beyond the tried-and-true formula of simply spouting big school words culled from the titles and summaries of grant proposals, and giggling “what does that even mean?”.

She pits a handful of phrases from grant summaries against more urgent priorities, quoting Michael Potter, a "research fellow" specialising in taxation at the rightwing thinktank Centre for Independent Studies, as saying:

"Would it not be a better investment to fund research into cures for disease, major social problems, and ways to boost the Australian economy?"

Quite. Presumably we can leave it to the Tele and the CIS to decide on which research is most beneficial? Without the need for all that grant-writing and peer review?

Trying to isolate researchers by painting some research as being valuable and the rest as claptrap is a clever strategy. But devoutly as we all may wish for an end to cancer, even cancer researchers – hell even some cancer pateints – think there are other priorities too. 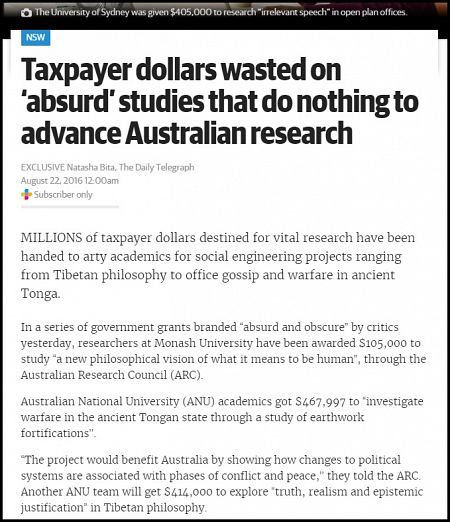 We wade reluctantly beyond the Daily Telegraph paywall, to bring you the introduction to Natasha Bita's rigorously researched article (Image screenshot dailytelegraph.com.au)

Sexual conflict and the taxpayer

The Australian Research Council no longer publishes the titles of grants in its funding announcements. I’m not sure what the official line is, but the impression among my colleagues is they seek to present a small target to exactly this kind of pillory, which was becoming annual sport when the likes of Andrew Bolt grew tired of their regular targets of faux-outrage.

Now the ARC publish only summaries of the projects or their likely benefits. Never mind, those can be cherry-picked too. That’s how I found my project mentioned in yesterday’s paper.

A News Corp blogger named Tim Blair picked up on a project of mine, in which I collaborate with economists Pauline Grosjean and Paul Seabright that was funded in last year’s round:

'Surely a government that genuinely believes we have serious debt and deficit issues wouldn’t give more than $500,000 to the University of NSW for a project that “intends to address how the evolutionary phenomena of intra-sexual competition and intersexual conflict interact with economic circumstances to shape gendered behaviour and attitudes”.'

And here’s the bit that convinces me “Tim Blair” isn’t just a poorly programmed bot:

'It’s difficult to tell what’s meant by “intersexual conflict interacting with economic circumstances” but it’s probably something to do with taxpayers getting screwed.'

See what he did there? If it doesn’t snare the Walkley, it’ll definitely have the boys down the pub chuckling into their schooners.

The bit that Mr Blair quoted selectively was from the description of our project 'On the origins and persistence of gender: Combining evolutionary and economic approaches to study sex differences and cultural variation'.

You won’t find that title on the ARC website, but you will find the full project description:

This project intends to address how the evolutionary phenomena of intra-sexual competition and inter-sexual conflict interact with economic circumstances to shape gendered behaviour and attitudes. These phenomena are important in evolution, economics, psychology and sociology, with implications for the economy and for the welfare of women and men. The project predicts that gender-related culture arises, partially, out of mating market dynamics. The research crosses traditional boundaries between biology and economics to investigate the forces giving rise to gendered behaviour and resulting patterns of marriages, violence, political preferences and occupational choices. The project may provide new insights into the links between gender and violence, within-family conflicts, and gender roles in the home and workplace.

In 18 years of applying for research support, I have never yet proposed a project with more pressing or important consequences. It contains so many of the things that conservatives fulminate over: declining marriage rates, rising violent and non-violent crime, and changing gender roles. If our project can provide new insights into intimate partner violence, or why young men take risks with their lives, or the reasons behind declining marriage rates, I would expect the likes of Bita, Potter and Blair to show at least the minimum humane curiosity.

Curiosity, it seems, is a limited commodity at Telegraph HQ. As is the capacity to do even the most cursory research. Shonkily researched assertions are okay if you enjoy the safe patronage of a major news organisation. You would never get away with such abject laziness, or such contempt for professional disinterest in a grant proposal to a Federal funding body. 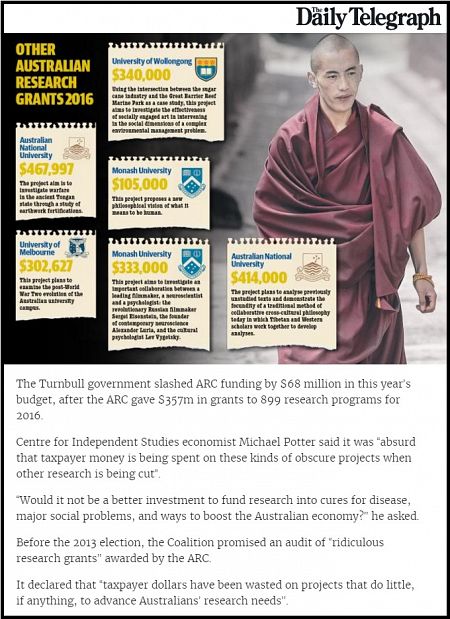 Morning shock jock Ray Hadley picked up the Telegraph’s baton in an interview with the Treasurer, Scott Morrison, demanding that the ARC justify its funding decision in the front bar of a Western Sydney or North Brisbane pub.

Yes, after the forlorn cries for better funding of research rang out through Science Week last week, and as the ARC sits to decide the outcomes of this year’s biggest schemes in Canberra, the pro-ignorance side of the culture wars has decided to play their favourite game. Their attempts to paint researchers as out-of-touch layabouts draining the public purse are, if you read the comments on Blair’s blog, playing well with the patrons of those very pubs.

Our ideas are already well pub-tested, Mr Treasurer. Many a research project is hatched in a bar-room conversation. Many of us still have the scrawled-on beer coasters to prove it (#putoutyourcoasters?), and receipts to show we spent our own money to buy the booze. And there seems no end of “Research in the Pub” evenings, in which academics explain their research and discuss ideas with members of the curious public.

And the fewer than 20 per cent of projects that succeed in gaining funding have passed a trial by fire more intense than any front-bar witch hunt Messrs Hadley or Morrison could confect. Indeed, the real scandal here is how much of Australia’s top-notch intellectual effort is wasted by only funding a small proportion of the many deserving projects. If the treasurer is as worried about waste as he professes, then perhaps he should find the money to fund universities and research in line with the kinds of country Australia should hope one day to become.

Research shows that it would be an economically sound investment.

Rob Brooks is Scientia Professor of Evolutionary Ecology and director of the Evolution & Ecology Research Centre at UNSW Australia. This article was originally published on The Conversation. Read the original article.

So @dailytelegraph ridiculed a grant of mine. Pity they didn't read the whole paragraph they quoted. https://t.co/KrHxk3sSjR #pubtest

This is what the peer-review process on his latest grant looks like, says Rob Brooks.

Do the right research.Subscribe to IA for just $5 a month (or less).