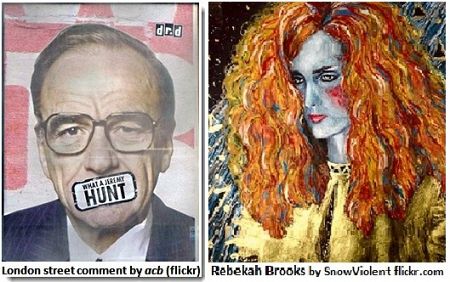 CRIMINAL CHARGES against Rupert Murdoch insider and favourite Rebekah Brooks may be a prelude to looming charges arising out of Brooks' testimony before the Leveson Inquiry the week before last.

Crown Prosecution Services charged Brooks, her husband, and four others with conspiracy to pervert the course of justice on Tuesday May 15. The alleged conspiracy took place between July 6 and July 19, 2011.

Brooks and the co-conspirators concealed and removed materials sought by police in their investigation of phone hacking by Rupert Murdoch's News Corporation subsidiary, News International, according to prosecutors. Brooks resigned as chief executive officer of the subsidiary on July 15, 2011.

Brooks' current legal troubles should not obscure the significance of her testimony before the Leveson Inquiry over the last fortnight. During her several hours on the witness stand, she was confronted with an explosive email that, if true, implicates Conservative Party Culture Secretary Jeremy Hunt in a conspiracy to pervert the British regulatory process in favour of News Corporation's bid to acquire the ten-million-subscriber pay TV company BSkyB. News Corp owns 39 per cent of the company. It sought the remaining 61 per cent.

In addition to the Hunt-BSkyB evidence, Brooks' testimony at the Leveson Inquiry last week may result in additional charges of hiding and destroying evidence.


Were the lost Blackberry emails part of a conspiracy to pervert the course of justice?

When Brooks left the News International CEO position in 2012, she surrendered her BlackBerry to the company. Under questioning by Queen's Counsel Robert Jay of the Leveson Inquiry on May 11, 2012, of the emails that the BlackBerry had contained, she noted: "We had to image them and we had some problems with that." (See Brooks Blackberry.)

The emails were all destroyed except one, a compressed message from Prime Minister David Cameron that had no content.

Queen's Counsel Jay pinned down the dates of the missing emails in this question: "So we have, as you explain, emails and texts which only cover a limited period, from the beginning of June 2011 until, you say, 17 July. Maybe 15 July or 17 July.”

Brooks responded,"I think it was the 17th."

Those dates include a portion of the time period during which prosecutors allege that Brooks had engaged in the conspiracy to pervert justice.

Brooks claimed that "my Blackberry was imaged by my legal team", the point at which the emails disappeared. If the lost BlackBerry emails are part of evidence destroyed or hidden, maybe it wasn't Brooks’ legal team that imaged the BlackBerry and hid or destroyed the stored messages. No one on her legal team was charged in the conspiracy by Crown Prosecution Services.

Could it be that Brooks was somehow responsible for the destroyed or hidden emails? If so, her inquiry testimony last week makes her the star witness for her own prosecution. There is little doubt that Brooks provided vital evidence for any future prosecution of Jeremy Hunt.


"Frederic Michel sends an email and it goes to just you." [See full email.]

Brooks seemed surprised, even though she had reviewed the evidence prior to the hearing:


"I would be surprised if it just came to me.  As you’ve seen from the previous emails, they were always copies in to the same -- almost the same group of people, but perhaps it was directly to me." [See Brooks 5.]

At the opening of the email, Michel tells Brooks:


"Hunt will be making references to phone hacking in his statement on ­ this week … hacking has nothing to do with the media plurality issue."

Plurality refers to the criterion Jeremy Hunt has outlined as the basis for approving News Corp's bid to acquire the remaining shares of BSkyB. The term references the number and diversity of media outlets available to the British public. If the acquisition reduced media plurality, there would be cause to deny the bid (an unlikely outcome). Michel claimed that Hunt would exclude the explosive phone hacking allegations against News Corp's British newspapers from his considerations on bid approval.

If true, Michel’s statement implies a conspiracy between Hunt and News Corp to rig the BSkyB approval process. Hunt would be acting as an agent for News Corp.

The Michel-to-Brooks memo ends with this:


"JH [Hunt] is now starting to look into phone hacking/practices more thoroughly and has asked me to advise him privately in the coming weeks and guide his and Number 10′s [Cameron’s] positioning."

The closing elaborates the opening paragraph and expands the conspiracy from Culture Secretary Hunt to Prime Minister Cameron.
In her reply to Michel, Brooks asks "when is the Rubicon [sic] statement" and Michel responds: "Probably Wednesday" (June 29, 2011).


Is Michel's smoking gun email reliable? Look at the evidence.

News Corp apologists have seeded the media with the notion that Michel, News Corp's chief lobbyist on the BSkyB acquisition, is some sort of Walter Mitty who exaggerates claims of his access. Brooks even alluded to this in her testimony.

Rather than rely on name calling, let's look at the evidence, based on Hunt's behaviour after 27 June 2011, to determine the veracity of the claims in the email and the implications about a Hunt-News Corp conspiracy to rig approval of the BSkyB bid.

Thursday, June 30, 2011, House of Commons:Labour Member of Parliament (MP) Tom Watson asked Culture Secretary Hunt: "… if he will make a statement on the News Corporation acquisition of BSkyB."


"Earlier today, I placed a written statement before the House outlining the next steps in my consideration of the potential merger between News Corp and BSkyB." That statement, he said, reflected changes in his process of approving the bid that offered "a further layer of very important safeguards."

Hunt made his statement to the House of Commons on Thursday, in line with Michel’s predictions in his email to Brooks. Was the written statement to which Hunt referred the "Rubicon statement" Brooks had asked about in her reply to Michel?

What did Hunt say in his written statement on the News Corp bid to acquire BSkyB?


“I believe that there are sufficient safeguards to ensure compliance with the undertakings [by News Corp]. Furthermore, the various agreements [between News Corp and the government] entered into pursuant to the undertakings will each be enforceable contracts. Therefore, whilst the phone hacking allegations are very serious they were not material to my consideration."

Hunt announced that he was in favour of approving the bid and that he was referring the News Corp acquisition to the Competition Commission. He outlined the new safeguards he had referenced to MP Watson and, in the last sentence, separated "phone hacking allegations" from his considerations. To remove any impact of the outrage against News Corp for phone hacking, Hunt had structured the referral to make sure that the Competition Commission would be "constrained to rule on issues of media plurality" only.

Hunt was simply acting out the strategy that Michel talked about in the smoking gun email — separating the real prize, the approval of the BSkyB acquisition, from the hacking scandal, while talking tough on the scandal.

Hunt went to Parliament to make a key statement on the bid within Michel's time frame. He took the position that Michel had said he would on the bid. And, most cynically, Hunt separated the issue of corporate responsibility and fitness represented by Murdoch media properties from the approval criteria for the bid.

Ironically, to fend off the intense attacks on Hunt after the testimony of Rupert and James Murdoch in mid-April, PM Cameron suggested that the Leveson Inquiry would be the forum that would best judge Culture Secretary Jeremy Hunt's suitability for office.

That judgment is clear — Hunt did act as an agent for News Corp.

The inquiry also foreshadowed the charges against Rebekah Brooks for perverting the course of justice by destroying evidence.

How many careers will Rupert Murdoch end during his descent into a maelstrom of business and political oblivion?

More importantly, how many lives has Murdoch destroyed through the nihilistic news and editorial policies throughout his media empire?