In 1973, a Libyan passenger jet with 113 people on board was shot down by an Israeli fighter. Everybody in the Libyan plane died.

Five years later, on 20 April 1978, Korean Air Lines Flight 902 took off from Paris to fly to Seoul via the Polar route. Somehow, the pilot lost his way. His plane, with 97 passengers and a crew of 13, was heading straight into the Soviet Union. It was in the heat of the Cold War. Nikita Krushchev had been replaced by Leonid Brezhnev. Jimmy Carter was president of the US.

The moment that aircraft crossed the Russian border, it fell into the hands of a nervous and trigger-happy Soviet Air Defence Force. Two Russian Sukhoi SU-15s began to tail the airliner. The pilot on Flight 902 seemed oblivious to the Russian jets. The Koreans made no contact with the Russians, gave no warning signals.

The Russians flew close to 902, one on each side. One SU-15 fired a single missile that tore into the left wing of the passenger jet and went on through the fuselage. Somehow the Korean pilot managed to bring the airliner down onto a frozen lake, where it  skidded for nearly two miles. Fifteen of the passengers were dead. The cockpit crew and the cabin staff survived with minor injuries.

It has taken 36 years for world governments to finally decide that airliners should be banned from flying over war zones. But even then, an undeclared war zone or missile practice range might still be a problem.

Tension between Iran and the U.S. brought Rupert Murdoch into the next major air disaster. He had been courting a relationship between the movie star U.S. President Ronald Reagan and British PM Margaret Thatcher.

Iran Air Flight 655 was a civilian passenger plane on a regularly scheduled daily flight from Tehran to Dubai. On July 3, 1988, it was carrying 16 crew members and 66 children and their mothers returning from holidays. One child was a three-year-old girl. It was following its regular daily flight path when the U.S. guided missile cruiser USS Vincennes fired an SM-2MR surface-to-air missile.

The Middle East reporter Robert Fisk of Murdoch-owned The Times, in London, heard the explosion. He told of seeing black clothed women, some holding young children close to their bodies, dropping from the sky into the Persian Gulf. They looked like angels, he wrote.

Fisk’s brilliant story was plastered all over the front page of first edition of The Times. Murdoch rang the editor from Washington and ordered him to drop it. On this issue, Robert Fisk resigned from The Times after 20 years and went to work at another paper, The Independent. Murdoch had just had lunch with Ronald Reagan.

Subsequently the U.S. paid a total of $61.8 million compensation.

One could not doubt that Australia’s Prime Minister Tony Abbott had his heart in the right place when he entered the fray that followed the destruction of Malaysian flight MH17 and its crew and its passengers last month. He showed genuine concern for the families of the dead.

Of course, any other politician would have done the same.

It was an emotional decision, not fully considered for all its range of alternatives and consequences, and was exploited by the media pack, that made the pain even worse for suffering families.

The media pack of modern journalism was actually imported to Australia by Rupert Murdoch after he visited America and saw them in action.

In those early days, Prime Minister Bob Menzies would invite four or five of the top political journalists and would chat with them. They would go away afterwards and write their separate stories and Menzies would be happy he had fully explained his plans.

But Rupert came back from America enthusing about American-style politics. He had invited a group of top television company executives to visit Australia and he wanted photographers and reporters to come out to Melbourne airport so the visiting heavies should feel at home and be impressed that Murdoch could provide them such a greeting.

We only had two photographers at the Truth, and they were both on other assignments, so I took a bunch of office girls and reporters to the airport and gave them borrowed cameras and educated them into shouting questions and making the flash guns go off (without film).

Rupert had a big smile on his face when he looked at me while the TV magnates seemed bewildered as they tried to answer a bunch of unintelligible questions.

The greatest concern about the events in the Ukraine that bothers me today is Rupert Murdoch’s deep involvement with politicians from various countries: Britain’s Thatcher and Blair in particular, American presidents from Jimmy Carter through to George W Bush and Australians from John Howard to Tony Abbott, Ariel Sharon to Benjamin Netanyahu.

How deeply have Rupert’s close and secret relations affected the range of wars that began after World War II and have continued through the 20th century into the 21st?

They are wars that were all unnecessary. They were all wars in which the Western powers and Australia were defeated – despite the lies of the politicians – who pretended afterwards that they had been successful.

North Korea, Vietnam, Iraq and Afghanistan were all costly defeats with horrible consequences for the people of those nations. In World War II, Russia’s Stalin took control of the countries to the East and the people of those countries have suffered ever since — some succeeding in different levels of freedom, others engaged in internal wars, like the Ukraine.

Wars sell newspapers and Rupert still lives in hope that he can bring his papers back to life. We will never know how much of his influence has caused so much suffering in these parts of the world.

Tony Abbott is what happens when a senile megalomaniac owns the media. 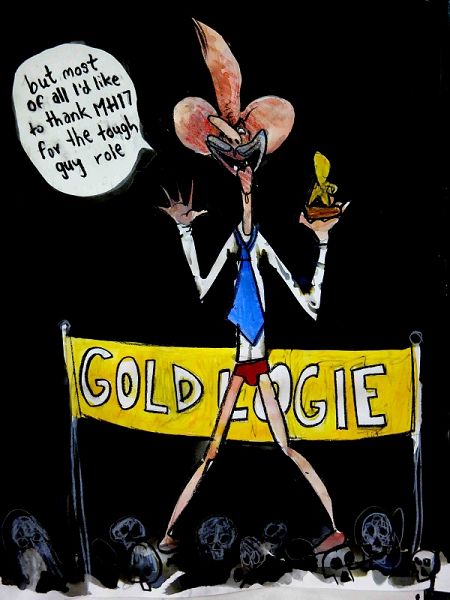