Vince O’Grady considers the question of whether the Australian mainstream media is biased by looking at three recent incidents — two involving the national broadcaster.

I AM A FAIRLY NEW adherent to Twitter and am in the addicted phase at the moment.

As a communications medium, it beats anything I have ever seen. The stories are coming out by the second from all over the world. It allows many to communicate almost instantaneously. It is the true 24-hour media cycle.

I say true, because what we are being fed by the mainstream media is cherry picked to the nth degree. I will give you three examples, which show the underlying bias of the media.

Mark Scott’s ABC is a case in point of the cherry picking of the news; not everywhere, it must be stressed, but in the outlets where they have the most exposure.

One of the major outlets is online.

The original posting was a video clip which was 11 minutes long. It was posted within hours of being shown on ABC News24. It is now 54 minutes long:

The following YouTube clip is an excerpt of the speech run on ABC News 24:

Contrast that with the Australian Prime Minister Julia Gillard’s speech, which was given at the same festival, and was unable to be shown due to “technical difficulties”.

When originally posted to the web, it was four minutes long:

Today, when I checked, it is still 4 minutes and 28 seconds long.

The prime minister answered questions from the audience and the director of the festival, and was there from 11.45am to 3pm.

Turnbull’s speech was about “honesty in politics”. Why should he be allowed to be seen for 54 minutes and the PM for a mere four?

One could argue that this is a clear example of unbalanced reporting.

My second example is the National Press Club, where the Prime Minister recently gave a speech. I was alerted to this by a Tweet on 18 Jan: 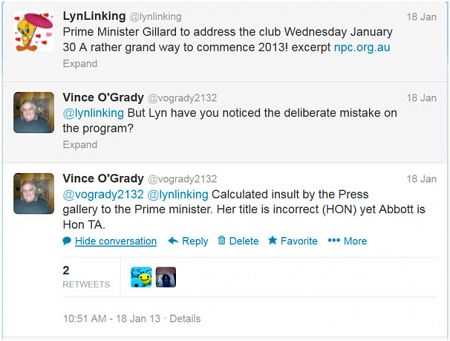 The problem here is the style used for the Prime Minister: they left out “the Hon”, yet described Tony Abbott as “the Hon Tony Abbott PM”. 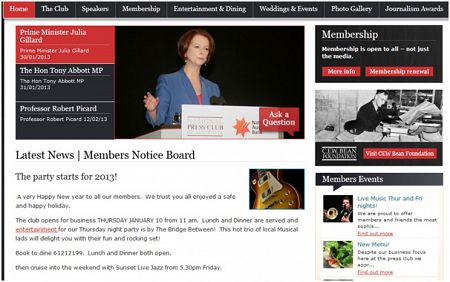 After tweeting the National Press Club (along with several other tweeters), emailing them and monitoring their website for days on end, they finally changed the title — though no correspondence was entered into. 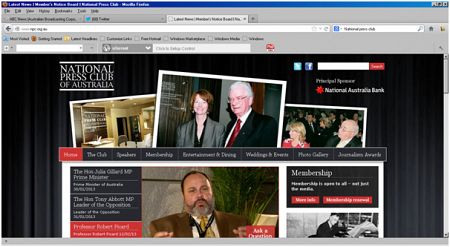 One might think that no-one would know better than the Canberra Press about how to address a Prime Minister and so many might be inclined to think that this was a calculated slight, and not a simple mistake.

The third and last example, and in my opinion the most blatant example of bias, was the caption under a picture of the Prime Minister’s visit to Heyfield where, along with Victorian Premier Ted Baillieu, she thanked the Emergency Service personnel for their service. 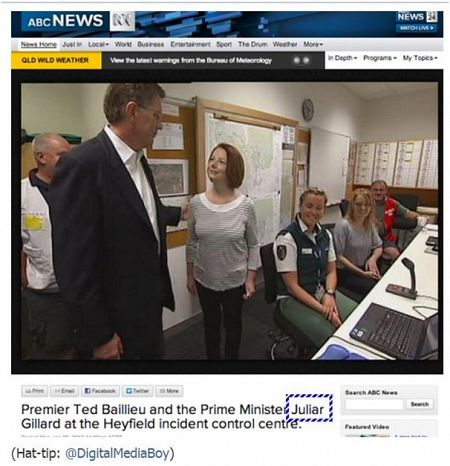 Note the “Juliar” caption (and a big thanks to @digitalMediaBoy for spotting it.) 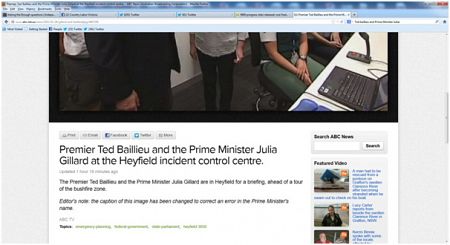 The editor’s note is worth repeating.

Editor's note: the caption of this image has been changed to correct an error in the Prime Minister's name.

An error? Or was it an out of control ABC employee and a thoroughly incompetent editor?

Immediately Twitter went feral with outrage that such a thing would be allowed to happen on “our ABC”.

I made a formal complaint and received the automated reply giving me all sorts of information about what I could read about the ABC editorial policy and a whole lot of words.

The ABC, which promotes itself on Twitter around the clock, were tweeted by numerous people, and indeed Mark Scott (who also has a Twitter account) was the recipient of several tweets regarding the slur.

Those expecting some action from the ABC about the news they themselves had generated were to be sadly disappointed — what they received was total and absolute silence.

If you were on the fence as to the bias of the media, I’d suggest these three illustrations, out of a plethora of others I could have selected, could give you a reason to re-evaluate your position.

The most blatant abuse of the public is the complete silence from Mark Scott in recognising the slur, having an enquiry and sacking the people who perpetrated it.

Being fairly new to the medium of writing and being published, I can assure you that I have had (and rightly so) had my fair share of criticism from my editor. Some of it because of genuine mistakes and sometimes because my right brain gets in front of my left and I transpose letters (two finger typist).

However, that is why he is there: to check and correct such mistakes. There is no excuse for such blatant “errors” — none.

Especially not from the ABC.

If this is the standard we expect from the so called mainstream media before the 2013 election, then it is going to be a very long year.