RUPERT MURDOCH has just given the strongest hint yet that he foresees a future without printed newspapers.

While Murdoch has toyed with internet news before, his earlier efforts into the digital world have always been disasters that have cost him millions of dollars.

But he made a clear statement last month to a New York digital publisher that he was ready to have another go. Last year, Murdoch broke his News Corporation into two sections: one for newspapers and book publishing, and the other for making movies and TV shows.

This is speculation, of course, but he made it clear in a throwaway line to a reporter for the digital Capital New York internet business publication that he was looking ahead to a different future.

“News Corp is in the first sort of transformational year,” he said. “There’ll be some interesting deals.”

Did that mean that he was considering another acquisition to follow the social news internet publication Storyful, which he bought late last year for $25 million?

All he would say was:

He made the comment at the annual Time event to announce the 100 people whom the magazine decides are the most influential in the world that year.

Murdoch has also introduced an internet version of the Wall Street Journal called WSJ.com. It could be another forerunner of his future intentions.

Murdoch was asked if his 42-year-old son Lachlan, a former Australian television executive, would be in charge of launching more digital news services.

“He’ll be just beside me and James,” replied Murdoch, “along with Chase Carey. The four of us will make a great team.”

Carey, he said, would stay with the company for a few years more.

Last year, in another interview with the same publication, he was asked about another of his U.S. newspapers — the New York Post.

Murdoch said digital only could be the future:

“It might go digital-only in ten years, but only when eighty per cent of the Post’s circulation is still reading the newspaper.”

The Post loses more money than most of his newspapers, but is useful to Murdoch as a political weapon — as are his Australian and British newspapers. Murdoch’s newspapers suffer losses in double-digit multi-million sums every year and survive, only as useful taxation adjustments.

Did he think these papers would return to profit if they turn to digital production: “Well, yeah,” he said, “absolutely.”

In another brief interview at a New York social event last week, Murdoch was asked his views about the basketball owner Donald Sterling who had been banned from owning his team or attending games because of a racist remark.

“Excuse me, Mr Murdoch,” the reporter from the New York magazine asked, “Could I ask you what you think about Donald Sterling?”

Murdoch’s answer, published in the magazine, was: “No.”

And then he walked away. 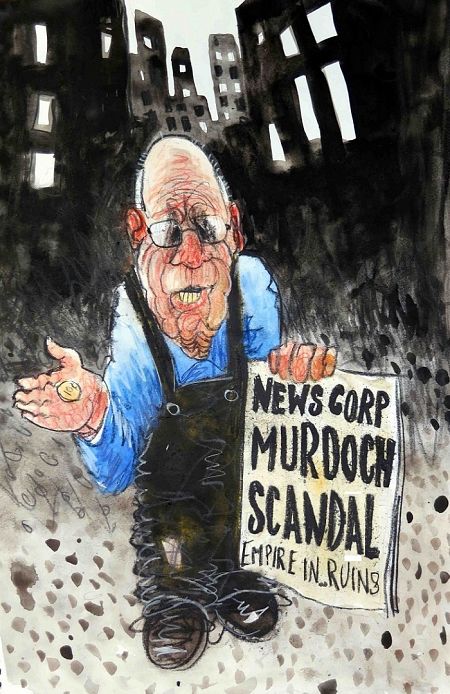