Get ready for the carbon tax cockatoos

By Frank O'Shea | 8 July 2011, 12:00am | comments |
Get ready for the deafening cacophony of special interest groups complaining about the carbon tax, says Frank O’Shea. 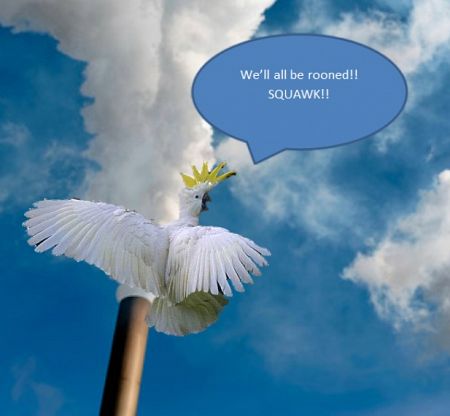 It is Monday morning, July 11. That harsh screeching you hear is not some flock of cockatoos calling each other to a new supply of pine cones. That’s the sound of special interest groups complaining about the carbon tax and hoping that if they make enough noise they will draw the attention of the panting media. They have not long been released, having been locked up for hours, some for days, looking through the government’s plans for a carbon tax.

Here are the big miners, there the second-tier miners; here the coal industry, there the farmers; here tourism, there aviation; over yonder, getting hoarse from three days of screeching, are the hauliers. Western Sydney has its own lobby, as does RURA (that’s rural and regional Australia) and North Queensland and Western Australia. On the top of the light pole where everyone can see them are a few prominent industrialists from retail, the unions, even from one of the churches. All desperately trying to be heard above the cacophony.

You feel kind of sorry for the media — print, radio, television, shock jockery. All leave has been cancelled. There have been internal conferences during the week where the editor has laid down the law. Each person has been given one industry or group to concentrate on.

“Find out how they are affected, how it penalises them over other groups. They will give you the material; your job is to put a better gloss on it.”

“But sir, shouldn’t we put the other side too?”

“You’re new here, aren’t you? Didn’t they teach you anything at journalism school? You’re on the dairy industry, right. Go out, find some farm down in Bega or Goulburn where the husband has died and the wife is pregnant and the kids have to travel 12 kilometres to school and the cost of running the milking shed will go up by 15 per cent and the supermarkets are squeezing her so she can’t recover the extra cost, and make a good sob story out of it.

“Who’s doing transport? Right, Mike, find some fellow with a small or middle truck who uses diesel and will therefore be penalised. Come on, people, you all know the ropes. One hard case is worth a dozen with no complaint.”

Meanwhile back in the pine forest, the squawking grows louder, more outraged. Anyone prepared to listen is convinced that the sky is about to fall, that thousands will be put out of work – the coal miners have moved to a tree next to the union crowd – that the economy is doomed. Doomed, I tell you, doomed.

They too have been in meetings all week where they have been coached on every possible question that might be put to them. It has been explained by the people in PR that the important thing is to appeal to (a) self interest, (b) greed and (c) the awful problem of some small sub-group. They have acted out the various scenarios — those retired journalists brought in for the mock interviews were well worth the cost.

Now, everything is ready. If only they could attract the attention of ACA or TDT or 7.30, that would be ten times better than a spread in a newspaper. They are sure that Barnaby and Tony won’t let them down. They have been told that they can afford to seem reasonable and prepared to compromise, because they know that the human vu-vuzellas have only one note and that goes Great Big New Tax.

Perhaps we should look at what all the fuss is about. It is about something that we would now be comfortably living with if the tree-huggers had not spat the dummy last year. But that’s another story and not a very edifying one.

We are talking about a small effort by our country to be responsible international citizens. We send representatives to various overseas gatherings — political, economic, industrial, academic, sporting. At those meetings, it is kind of important to be able to hold your head up and say that your country is not a shirker, a sponger on the rest of the planet.

The greatest, most egregious insult that has even been paid to this country is the claim that because we are responsible for “only 1.3 per cent” of global carbon dioxide emissions, we should not do anything. It is an argument put by people with an Australian passport, people who represent you and me. Don’t they realise how pathetic that is, how selfish, how uncivilised it makes us sound? The sad thing is they probably don’t.

Before we know it, those cockatoos will be stripping the rubber from the street lights and wrecking one of the most prosperous countries in the world. And we poor slobs who feel for Gaia can do nothing about it except put up with the screeching.
MEDIA ENVIRONMENT Australian media Barnaby Joyce Carbon tax climate change Environment Frank O'Shea global warming Tony Abbott
Recent articles by Frank O'Shea