James Packer and his Crown Casino head for their moment of truth in the High Court for fleecing pathological gambler Harry Kakavas, reports Mason initial P.

THE MOMENT OF TRUTH for Melbourne's Crown Casino regarding its corporate misconduct toward Harry Kakavas will arrive on the 4th of April. The country's biggest casino and the nation's highest court will co-host the world's leading debate regarding the duty of care of these rapacious 'money-machines'.

In a case described by Senator Nick Xenophon as ‘significant’ for gambler’s rights, Gold Coast property developer and pathological gambler Harry Kakavas will have his appeal heard by the High Court. He has sought to recover staggering losses incurred whilst playing baccarat at Crown Casino. Successive decisions by the Victorian Supreme Court and Court of Appeal rejected his claims that the casino took advantage of him and his 'special disability'.

Whilst it is expected that the matter will settle, the real question is whether Crown Casino are fit to hold a casino licence. An extract from a novella profiling ‘top end of town’ corruption, Strange Animals Come Down to Drink**,  tells the story of 'The Case of the Crooked Casino' in pithy fashion and forecasts a climactic conclusion.

THE CASE OF THE CROOKED CASINO 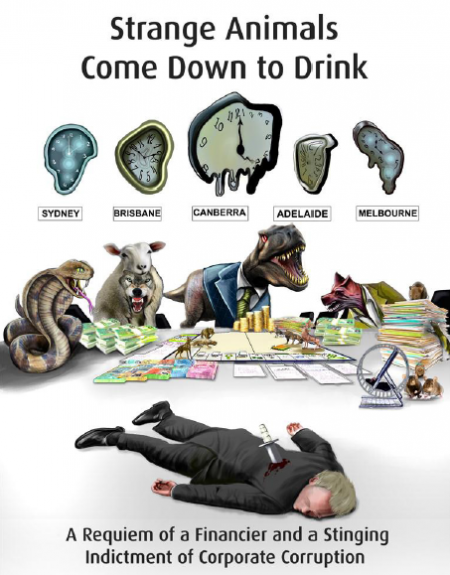 HE WAS A DESPERATE ADDICT, and had already done time for a criminal offence to raise money to feed the habit. He nearly went to jail again for armed robbery to support his habit, but the charges were dropped. He excluded himself from every Casino in the country. He knew he had a serious problem. He left town to clean up his life. A fresh start, a new town and he was under way. He (Harry) is the most compelling salesman in the South Pacific and could sell ice to an Eskimo. He earned a big quid in property wheeling and dealing. He went on to make $60m...

His addiction returned to haunt him, but he couldn’t gamble in Australia. He was an ‘excluded person’ under the Casino Control Act. His poison was baccarat at $300,000 a hand — simply not normal. The lights of Las Vegas lured him and word spread to Australia. The rumour is a business icon who owned a casino and loved a bet said, ‘Get him. We want that whale’ (A whale is a big gambler).

Small problem; they knew he was addicted. The casino had given supportive evidence of his problem in prior criminal proceedings to reduce his prison sentence. They knew he’d been ‘excluded’ by the Superintendent of Police because he had committed a criminal offence related to gambling. They therefore knew he was not legally permitted on the premises and if he did gamble, they knew his winnings were to be forfeited to the State. Therefore, he could not legally wager.

Did I say small problem? Ok, let’s be honest. It was an insurmountable problem, impossible to get around, without the system turning a blind eye to what was about to happen. A jet, some cash as bait to lure the big catch, and a nice penthouse suite under a pseudonym to avoid detection, and he (Harry) was back in the game. And play he did. There were 30 occasions, which the Judge (Bongiorno J.)  in the Full Court called, ‘The Program’.

You see, my client sued the casino 5 years ago for unconscionable conduct and a single Judge in the first instance came up with some unusual law to protect the top end of town. The Judge found, as a question of fact, that the casino knew this bloke was an ‘excluded person’ within the definition of the Casino Control Act. However, he let the casino off the hook by finding the company had ‘forgotten knowledge’. You can imagine how the hard working and righteous barristers for the addicted gambler reacted. I can see them in my mind’s eye asking the Judge quizzically, ‘Your Honour, would that piece of new law be under ‘F’ for ‘forgotten’ or ‘K’ for ‘knowledge’ in our legal Funk and Wagnall’s?’ I’ve never heard of a company having a bad memory. Clearly, there was massive pressure on the Judge to protect the top end of town, regardless of the misconduct.

It gets worse. When you’re unhappy with what the single Judge says, you can go back and ask three Judges. If the first Judge was a bit dopey, you’re bound to get the smart guys next time around. The addicted gambler filed an appeal to the Full Court and it was back to the grind of preparation. Bear in mind, this bloke had been 5 years ‘in the trenches’ trying to get justice for his family and community. Here’s the rub. Of the $30m slaughtered because of his chronic addiction, $18m of the money wasn’t his. It belonged to hard working citizens who he’d persuaded to lend to him....

The Judges took three minutes to explain that it is acceptable for the casino to drain a person’s life savings so that he could no longer commercially function as a contributing member of his business community. They said it was okay to do that even though the casino had full knowledge of his gambling addiction, full knowledge that he was an excluded person, and full knowledge that it was unlikely to even be his money. The power of our aristocratic elite penetrates to our judiciary. A right thinking individual would be ashamed of that decision. In the preface to a 1947 edition of George Orwell’s ‘Animal Farm’ the famous author observed:


‘...how easily totalitarian propoganda can control the opinion of enlightened people in democratic countries....'

I’m reminded of the song called ‘The Gambler’ and Kenny Rogers’ very apt lyrics, ‘Know when to hold ‘em, know when to fold ’em’. If the icon were here, I'm sure he would say: ‘Son, don’t play this hand!’"

Whilst I’m not a gambling man, a lawyer must learn to assess risk. Given the extent of the Packer interests in gambling, a prudent billionaire would not take the risk on 'punting' this case. Sensibly they should ‘cut a number’ that makes Harry ‘go away’. If I were their lawyer, I’d try and take care of the 3 C’s…case, confidentiality and crime. It would seem that Harry Kakavas will finally get justice for the citizens for whom he has battled for nearly 6 years. Let's not forget his own family deprived of a normal life to make shareholders rich.

(** Published with the approval of the author of 'Strange Animals Come Down to Drink', which can be downloaded from fairgomate.com.au complimentary eBook or for purchase in paperback.)

24 February 2013, 11:20am James Packer and his Crown Casino head for their moment of truth in the High Court ...
Join the conversation
comments powered by Disqus
News updates