It is possible to desire an Australian republic with an independent head of state without bearing any ill feelings towards the monarchy. On the passing of Australia's head of state, perhaps this IA article from 2011 best illustrates the establishment media's irrational conflation of the two.

Managing editor David Donovan was grievously misrepresented in The Australian newspaper this week as part of its ideological campaign against The ABC.

DAVID DONOVAN'S popular recent article 'Elitist monarchy doesn't stand up to scrutiny' caused quite a bit of interest on the ABC website The Drum when it was republished there earlier this week, in a slightly different form, attracting hundreds of – mostly strongly supportive – comments. 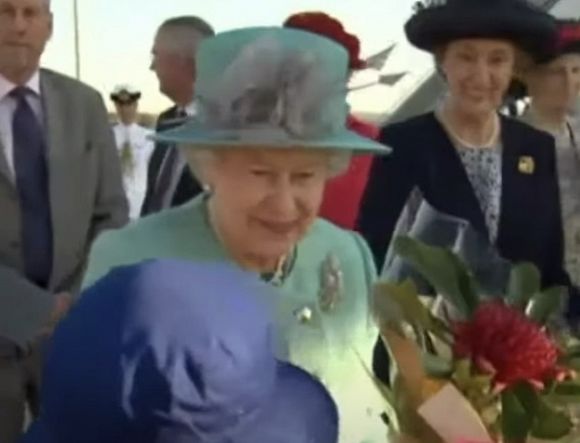 The royal family inherit positions of power and privilege in our system — yet escape any meaningful media scrutiny. We deserve to know who they are, says David Donovan.

Some people weren't, of course, impressed by what they perceived to be an attack on their beloved royals. Included amongst these was, it seems, the rather reactionary The Australian newspaper, which used it its ever-aggressive 'Cut and Paste' column to attack one of its usual ideological foes – the ABC – along with the IA editor.

The heading and intro for Wednesday's broadside were:

Your taxes at work. Things commentators hate on the ABC's online opinion website. 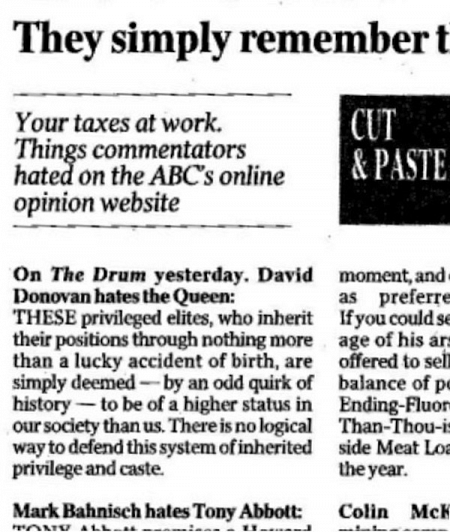 The column then took snippets from pieces published on The Drum on Tuesday, using sub-headings such as 'Mark Bahnisch hates Tony Abbott' and 'Gerard Oosterman hates conservative commentators' and so on, to support a contention – later confirmed in an email exchange between Donovan and The Australian – that The Drum was "unbalanced", presumably against conservative interests.

That's right, you heard correctly — The Australian was accusing the ABC of being unbalanced.

The first so-called "hater" in the article was IA's David Donovan, with 'Cut and Paste' making the following dig:

ON The Drum yesterday. David Donovan hates the Queen:

THESE privileged elites, who inherit their positions through nothing more than a lucky accident of birth, are simply deemed -- by an odd quirk of history -- to be of a higher status in our society than us. There is no logical way to defend this system of inherited privilege and caste.

There was a little problem with that statement — in that David Donovan didn't, in any way, attack the Queen. And he certainly didn't even come close to suggesting he hated her. As he explained in the piece, he has little emotion for the Queen other than vague familiarity. In short, The Australian simply lied in order to support an attack on the ABC — which it hates on both ideological and commercial grounds, since Aunty is a publicly funded competitor for News Corp.

To its credit, after a polite email exchange, The Australian did agree to publish David's original letter of complaint, an edited version of which was published today.

Unfortunately, this "quality" broadsheet managed to get the name of this publication completely wrong, printing the IA tagline instead of 'Independent Australia'. After a further complaint, they later corrected it in the online version.

However, Donovan's original letter was significantly abridged in both the online and print versions, leaving out some of his most telling arguments.

For the record, the following is Donovan's full and unedited letter of complaint to The Australian:

I was surprised to read in Wednesday’s The Australian ‘Cut and Paste’ column (‘They simply remember their favourite things (to disparage) and then they don't feel so bad’, 26/10/10) that I apparently hate the Queen.
The column led with the following bald-faced lie: 'ON The Drum yesterday: David Donovan hates the Queen', followed by a quote from my piece on the ABC website. The quote selected, however, referred to my view that the institution of monarchy is logically indefensible — it didn’t mention anything about my feelings for the Queen.

In fact, my piece on The Drum did not say, imply or infer that I hate the Queen in any way whatsoever. The ‘Cut and Paste’ column was just completely, and mischievously, wrong. The fact is, I have never, ever, made any statement in which it could be adduced that I hate the Queen. Indeed, I do not hate the Queen — I am merely indifferent towards her. As I said in the piece, 'I have no more loyalty, reverence, adoration, respect or devotion to the Queen than I would any other random person I have never met and, really, know next to nothing about'. The opposite of love, as any schoolchild knows, is indifference — not hate.

What I do hate, however, is a self-professed “quality” broadsheet that ignores, twists and distorts the truth to support its ideological “campaigns”— which, in the context of this particular Cut and Paste column, was simply a snide and unwarranted attack on the ABC. Unfortunately, this sort of shonky journalism is standard fare for The Australian these days. Unless that changes, I suspect you may have some trouble convincing people to go behind your paywall.

Journal of Australian identity and democracy

THIS IS NOT THE MIDWINTER BALL — it's way, way better!

31 October 2022, 2:30pm Independent Australia's first THIS IS NOT THE MIDWINTER BALL fundraising event is ...

12 September 2022, 9:00am Rest in Peace Queen Elizabeth II. It is possible to desire an Australian republic ...

Portraits of the Soul — A lifetime of images with Bill McAuley