By DeSmog Blog | 23 October 2012, 5:33pm | comments |
Alan Jones has been sent back to school to learn the difference between facts and lies, but will this really stop him speaking crap about climate change? Graham Readfearn from DeSmogBlog reports. 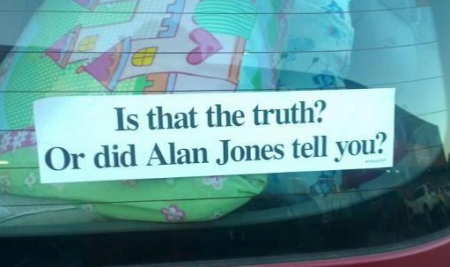 IT'S NOT been a great few weeks for Alan Jones, arguably Australia's most influential radio personality, and one who believes global warming is a hoax and that climate change science is "witchcraft".

In a humiliating episode, Jones and his Sydney radio station 2GB have agreed with the country's radio broadcasting watchdog to undergo training in fact-checking after complaints about a statement Jones had made about climate change.

Jones' most recent episode of self-inflicted misery began a few weeks ago, when the veteran broadcaster issued a half-hearted apology to the Australian Prime Minister Julia Gillard after telling a meeting of Young Liberals that Ms Gillard's father had "died of shame" over what Jones described as her "lies".

In the wake of Jones' invective, helped along by a social media campaign, dozens of advertisers pulled support for Jones, who will lose the use of a Mercedes-Benz car loaned to the station by the car maker.

Now the Australian Communications and Media Authority, a government agency which regulates radio broadcasting, has revealed that it has agreed a series of measures with Jones and 2GB over his fact-mangling on climate change.

Among the measures, Jones' daily monologues – the centrepiece of the show – will have to be fact-checked first by his producer. Any documents used in fact checking will have to be retained. Jones and the rest of the current affairs staff at the station will also have to undergo training "concerning factual accuracy and significant viewpoints". Jones' stint in the classroom was sparked by three separate complaints about his broadcast on 15 March 2011 when, during a 12-minute segment, he told his audience:

For the record, it is simply misleading to compare natural emissions with human emissions without considering natural absorptions. A half-truth is a whole lie. What's relevant is that by burning fossil fuels and pulling down forests, humans have upset the natural carbon cycle by adding tens of billions of tonnes of CO2 to the atmosphere every year.

Human emissions have increased levels of the greenhouse gas carbon dioxide in the atmosphere by some 40 per cent since the beginning of the industrial revolution and caused the oceans to turn more acidic. But enough of facts and nuance.

To back up his view, Jones also quoted James M Taylor, a fellow at the Chicago-based Heartland Institute. This is the institute which earlier this year ran a billboard campaign to "remind" the public that "the most prominent advocates of global warming aren't scientists. They are murderers, tyrants, and madmen."

After reading his editorial set-piece, Jones then immediately interviewed Australian climate science sceptic Professor Bob Carter who, it was revealed last year, had been earmarked by Heartland to receive $1,667 a month in 2012 to work on one of the think tank's projects.

The 2GB radio station tried to excuse Jones' error by telling ACMA it was obviously Jones' opinion. But ACMA found that Jones' claim would have been understood by a reasonable listener to have been a statement of fact. "The nature of the language, tenor and tone used was unequivocal and conclusive," the investigation report said. "The form of words neither indicated that it was contestable, nor qualified it as a statement of opinion."

The radio station also argued that there was a divergence of scientific opinion on climate change and provided the investigators with evidence. But ACMA said that "none of those views cited by the licensee substantiate the figures set out in the impugned statement".

Jones did have access to an editorial team to fact-check his statements but the investigation found that he hadn't called on them. Instead he had "researched the figures himself". ACMA asked the radio station how Jones had come up with the figure, but they didn't get a response to the query.

The segment was in breach of a section of the Commercial Radio Australia Codes of Practice, which states that current affairs programs must use "reasonable efforts" to make sure that factual material is reasonably supportable as being accurate".

But what effect will ACMA's ruling have? In my view, the fact that a regulator is giving some respect to the integrity of facts has to be a good sign. Listeners who have watched and listened to journalists and presenters misrepresent the facts on climate science will feel a small victory has been won.

But as The Guardian's Leo Hickman has written, there's a long way to go. Hickman is equally sceptical of the effect that the training might have on a "professional controversialist" such as Jones.

Certainly there seems to be no immediate effect. Since ACMA revealed the plan to send Jones and 2GB to fact-checking classes, Jones has issued another "apology" for his error by issuing more misleading statements about the carbon cycle.

Jones is currently the patron of the Galileo Movement, which also includes a long list of climate denialist "advisers" including Pat Michaels of the Cato Institute, Fred Singer, the Institute of Public Affairs' Bob Carter and "Lord" Christopher Monckton.

One name no longer on that list is News Ltd columnist and prolific climate sceptic blogger Andrew Bolt, who said the group had been spreading anti-semitic conspiracy theories about Jewish banking families controlling the world.

Another of Australia's leading proponents of climate science denial, Liberal Senator Cory Bernardi, has also been courting controversy, after stating that proposed laws to legalise gay marriage could lead to "consensual sexual relations between humans and animals".

Bernardi subsequently resigned from his position as the Liberal leader Tony Abbott's personal parliamentary secretary but has refused to back down from his view.

Cory Bernardi has spoken at Heartland Institute climate conferences alongside James M Taylor and has been forging links with the US Tea party movement through his Conservative Leadership Foundation.

The foundation has helped to establish online "grassroots" activist organisations campaigning against carbon pricing and promoting misleading views on climate change science. One such group is "CanDo", which came out in support of climate sceptic mining magnate Gina Rinehart's recent tilt for a board seat on newspaper group Fairfax.

And to perhaps close this neat little circle of fringe beliefs, CanDo lists two "national patrons". One is Hugh Morgan, a businessman who founded the Lavoisier Group set up to fight attempts to "decarbonise" Australia.

The second patron is one "Alan Jones".