While criticism against journalists can encourage healthy debate, sometimes it can also lead to bullying and online abuse, writes Peter Wicks.

IT WAS A TIME when Kylie Minogue’s ‘Can’t Get You Out Of My Head’ could not be removed from our heads. It was back in the day when terrorism meant airliners were flown into skyscrapers, suicide bombers killed thousands and mass shootings at public events were regular occurrences. Not today's version of terrorism which seems to include a request to wear a face mask and any attempt to act on climate change.

I’m talking about the early noughties, 2000-2003, a time those in our mainstream media must look back on fondly.

Social media has turned the tables on the old guard as the public have access to vastly more news sources than ever before. These days, many of the major stories break on Twitter or Facebook days, weeks, even months or years ahead of the mainstream, often from online news sites, bloggers, or just those who are in the know. 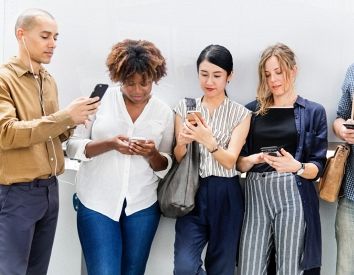 Social media and the internet has rewired our brains and society in important yet sometimes worrying ways writes Dali S-Blackwell.

Just like the record store and video rental store of yesteryear, those in the mainstream are dealing with publications closing, massive cuts to staff levels and a declining customer base. And just like those retailers of the past, some in our mainstream are struggling to adapt.

This struggle was highlighted last week with the reaction to a line of questioning from News Corp journalists at one of Victorian Premier Daniel Andrews’ daily press conferences.

Back in the early 2000s, feedback on articles and journalists was restricted to the “Letters to the Editor” pages in the tabloids. Hand-picked correspondence was published and anything else was discarded and never seen by the public.

Today, however, social media has opened journalists up to feedback both positive and critical. Not all those in the media have a public Twitter profile, of course, but those that do sometimes struggle with the concept of a public conversation being two-way. It is a similar story on Facebook, however not to the same extent as administrators on a page can delete comments.

Back in the early 2000s, we would have rarely seen an entire press conference, just a 30-second edit for the 6 PM news. Nowadays, we can see them in their not-so-glorious entirety online. Last Thursday, the backlash against journalists for their lengthy line of questioning of Premier Andrews at one such conference showed the ugly side from both sides of this debate.

One journalist in particular, whom I won’t name, was singled out for online criticism. Then came the responses from other mainstream journalists to defend her actions.

Having seen the line of questioning myself and seen the preceding narrative from the masthead over the previous weeks and months, I personally thought the criticism was justified.

Background is important for context. Some of the participants in this line of questioning have been critical of Daniel Andrews for being too heavy-handed in his approach to COVID-19, then too soft and now it’s back to being too heavy again (this could change again by the time this piece is published).

Some of these journalists were also involved in the prolonged and often personal attack of Victoria’s former Deputy Chief Medical Officer Dr Annaliese van Diemen after she tweeted about Captain Cook. Most of those racing to defend the journalist didn’t line up to defend the Deputy Chief Medical Officer; I guess personal attacks vary in importance depending on the person being attacked.

It’s worth noting that the same week of this press conference, some in News Ltd had been pushing a completely false story that the Victoria’s Chief Medical Officer Brett Sutton had resigned. Headlines around the country in the News Corp press such as ‘Dan-Made Disaster’ are indicative of News Corp’s bias and their preoccupation with promoting opinion as news.

After weeks of the national press gunning for the Victorian Premier, while neglecting to hold our Prime Minister to account for the pandemic wrecking ball swinging through the Federal Government-managed aged care sector, amongst other things, public anger at the media hypocrisy was a blister waiting to burst.

The relentless and desperate attempts to “get Dan” by some in the Victorian press was certainly worthy of criticism in my view.

That said, attacks of a personal nature on individual journalists are never justified. Some of the vitriol directed at one of these journalists, in particular, was disgusting, quite disturbing and certainly said more about the abusers than it did about the abused.

However, responses from some within the media were not a lot better.

The whole “us and them” attitude from some journalists in their responses only served to fan the flames of discontent.

What is it about the far-right's deeply personal rants about @DanielAndrewsMP? Yet no similar personal treatment of Berejiklian and Dutton over the Ruby Princess or systemic aged care failures. Victorians are going through a lot and they need our support right now. Not abuse. pic.twitter.com/FJBF6eLDSE

There is an attitude from some that they are somehow beyond reproach. Some of those whose job it is to provide a critique of our elected officials think they are above critique themselves?

I have often seen references to the “Twitterati” used to belittle critics as if everyone who is on Twitter is the same and should all be considered in the same category as the nameless trolls who tweet sexist abuse and death threats. This is no different to saying all journalists are Right-wing paedophile apologists like Greg Sheridan, Andrew Bolt and Miranda Devine appear to be.

Other journalists have complained that everyone on Twitter is suddenly an epidemiologist or explosives expert. I’m on Twitter and I’m neither. That’s why I rely on those with a journalism degree, because I know this is the same as having a degree in epidemiology as well as expertise in weaponry, just like it makes journalists above reproach in areas such as environmental science and psychology. Some appear to think that having a journalism degree means you can write on any subject at all and be above any criticism.

Here’s my view, for what it’s worth.

Nobody is above criticism, but nobody deserves personal abuse. Everyone who votes is biased, but journalists who work without wearing their bias on their sleeves do a better job. If you wear your partisan bias on your sleeve, you are no better than those you criticise as being partisan and yes, that includes me. Wearing someone else’s partisanship for the sake of a job is like wearing shoes that don’t fit — you’ll never walk properly and will only end up with sore and blistered feet.

If we can post a review for a restaurant or our local mechanic online, then, of course, we should be able to critique our news providers.

And if you’re in a job where you find yourself being heckled like a bad comedian, I’d humbly suggest taking your job a bit more seriously.