There has never been a better time to be a criminal in Australia — so long as you’re a white-collar criminal in the finance industry, writes Philip Soos from Deakin University comments (via The Conversation).

Soon after, he recanted, claiming he didn’t want the country to become a haven for financial fraudsters. This rephrasing likely followed on from Finance Minister Mathias Cormann leaning on Medcraft.

The mass media has done an admirable job bringing the Commonwealth Bank (CBA) financial planner scandal to light, forcing the ASIC to finally investigate, the Senate to inquire and the CBA to apologise and provide compensation. Despite this, frauds like these are universally downplayed as isolated events, perpetrated by “bad apples” in an otherwise trustworthy FIRE (finance, insurance and real estate) sector.

Our past is littered with a surprisingly large number of control frauds, which government and regulators have done next to nothing to prevent and rarely prosecute. The mounting frauds appear emboldened by deregulation and liberalisation of banking and finance.

The following table provides an overview of the major frauds committed by the FIRE sector in recent decades: 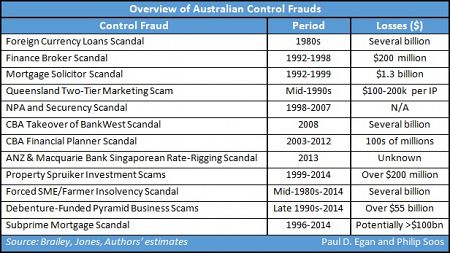 The term “control fraud” refers to the systematic, highly damaging, institution-driven and directed nature of the fraud, in contrast to common low-level frauds. The weapon of choice is accounting.

William K. Black’s book The Best Way to Rob a Bank is to Own One provides an excellent account of regulatory public executives who, during the United States Savings and Loan crisis in the 1980s, actively protected the worst fraudsters in the industry, while damning “mum and dad” investors. Black later developed the concept of control fraud, whereby executives use the institution they manage as the mechanism to commit fraud.

Control frauds typically involve a four-part strategy: exponential loan growth, lending to uncreditworthy borrowers, extreme leverage and minimal loss reserves (plus obnoxious pay packets for bank CEOs). The obvious presence of these four elements in Australia’s banking system demonstrates the risk to stability which lies at the centre of finance.

Australian economist Phillip J. Anderson documented in his book on US real estate cycles from 1800 to 2008 that fraud is never detected by the mainstream for two reasons.

The first is that FIRE sector executives and managers are extremely powerful politically, financially and legally, so few will tangle with them.

Secondly, during economic booms, the public is typically too self-centred to care, as long as the predations don’t affect the majority.

ASIC refuses to investigate the control frauds, instead choosing to offer up a number of excuses: lack of funding, jurisdictional boundaries, ineffective laws and so on.

Thankfully, 20-year veteran financial consumer activist Denise Brailey does what ASIC declines to do on a A$400 million dollar budget. Brailey, a criminologist, has helped unearth and sue control frauds and recalcitrant state governments over the years.

It has never been a better time to be a criminal, as long as you’re a white-collar criminal in the FIRE sector. Bankers involved with the CBA financial planning scandal have still managed to advance their careers and win bonuses.

History enlightens us, which is why the history of control frauds isn’t taught anywhere. Political and economic elites want the public kept blind to the plague of theft they’ve been engaged in.

In Australia, this history is left to individuals like Denise Brailey and (IA contributor) Dr Evan Jones to tell, whose work was used in my recently published book, co-authored with (fellow IA contributor) Paul D. Egan.

The disparity between white and blue-collar criminals has never been larger.

If I defraud my neighbour of $10,000, I’ll be charged, prosecuted and sent to jail for years.

In contrast, a banking executive who robs borrowers and loots or destroys untold billions of dollars is praised by politicians, business groups, the mass media and the economics profession for “wealth creation”.

Australia’s credit-based banking system – liberated from responsibility by deregulation, self-regulation, de-supervision and de facto decriminalisation – has and will inevitably continue to generate toxic and recurring control frauds. The FIRE sector cannot be allowed to profit from control fraud. Government has a civic obligation to prosecute those who perform criminal acts on innocent parties. We know this as the rule of law.

Academia could offer an independent voice against these control frauds, but the legal and economics professions are mute before the FIRE sector, which employs many directly and indirectly. As Black documented, mainstream economists have intentionally ignored the dangers of control frauds, proclaiming that “private market discipline” and “rational agents” can prevent frauds from even occurring —  the fallacious “market knows best” line of  reasoning.

The full extent of these control frauds is yet to be revealed as the government, regulators and external dispute resolution organisations (RBA, ASIC, APRA, ATO, AFP, Treasury, FOS and COSL) resolutely refuse to investigate. Meanwhile, control frauds are free to weave a trail of forced bankruptcies, homelessness, poverty, desperation, depression and suicide.

History shows government only acts when the predations of control frauds break in the mass media. The two largest control frauds, the debenture-funded pyramid business scams and subprime mortgage scandal, are running rampant. Unfortunately, government will only grudgingly do something when the number of victims climbs far enough that they become too visible to openly ignore – but, by then, it will be too late.

Nevertheless, a Royal Commission is necessary to shine a light on the transgressions of the FIRE sector.

This article was originally published on The Conversation, although the table has been updated by the author due to new information. Read the original article. Also check out the finance industry exposés of Dr Evan Jones here.