Coal, oil and gas — the subprime assets of the future 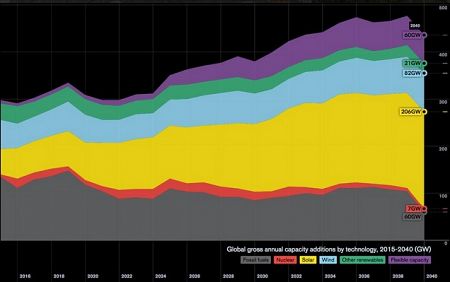 'The industrial age was built on coal ... next 25 years will be the end of its dominance' (Source BNEF, image via bloomberg.com)

LAST YEAR, then British Secretary of State for Energy and Climate Change Ed Davey asked whether coal, oil and gas were “the sub-prime assets of the future”.

This question was extensively explored in a provocative report released last week by the Center for International Environmental Law (CIEL), a Washington D.C. think tank.

According to CIEL, the answer to Davey’s question is a resounding “yes”.

Along the way, the report, called '(Mis) Calculated Risk and Climate Change: Are Ratings Agencies Repeating Credit Crisis Mistakes?' stresses the potentially enormous legal liability for the agencies if their ratings understate the pitfalls of what are likely to be severe climate impacts on oil, gas and, particularly, coal companies.

Coal is not only the leading contributor to atmospheric CO2 levels, it is the most financially dangerous investment. Coal prices have plummeted. Between 2010 and 2014, three coal plants were delayed or scrapped for every one built. After being dropped from Standard and Poor’s 500 Index in September, Peabody Energy, the world’s largest private sector coal firm, was dropped from Standard & Poor’s MidCap Index last week because its market cap has plunged from $3.9 billion to just $700 million.

Other recent developments have made the idea of stranded fossil fuel assets far more tangible. These have included the G20 conference asking for an investigation into $6 trillion in planned fossil fuel extraction investments, the wholesale divestment from coal by the Norwegian Pension Fund, and the International Monetary Fund’s repeated calls for an end to fossil fuel subsidies.

So far, the Big Three rating agencies have ignored all this — just as they, along with the rest of Wall Street, ignored both common sense and strong evidence that housing prices would not rise forever.

The U.S. Financial Crisis Inquiry Commission, which probed the causes of the 2008 crash and worldwide depression, called the three rating firms

'... key enablers of the financial meltdown. The mortgage-related securities at the heart of the crisis could not have been marketed and sold without their seal of approval. Investors relied on them, often blindly. In some cases, they were obligated to use them, or regulatory capital standards that were hinged on them. This crisis could not have happened without the rating agencies.'

Now the agencies are again playing the role of the blind leading the blind, relying on the assumption that no steps will be taken to reduce fossil fuel reliance, and that a warming world won’t interfere with business as usual.

'Many in the finance industry continue to rely on the current ≥4°C climate scenario (a “carbon bubble”), just as many relied on scenarios where housing prices did not decrease or stabilize. Indeed, the financial risks of a 2°C climate scenario loom large, just as the risks of sub-prime mortgages loomed over the financial industry prior to the credit crisis. Some analysts project that the fossil fuel industry could lose $28 trillion USD of revenue over the next two decades. Recently, the Bank of England’s Finance Policy Committee announced that it will investigate whether the carbon bubble could lead to a financial collapse.'

[The 4-degree scenario is one in which no measures are taken to restrict warming to 2 degrees.]

To nail down how wrong-headed the ratings system can be, CIEL looks at Moody’s decision in the fall of 2014 to give a Baa3 rating, which is investment grade, to the $150 million in bonds issued to finance the Adani Abbot Point Terminal, a port facility that will be part of the massive Australian Galilee Basin system of mines and rail lines designed to get Australian coal to Asian markets. Dubbed a “carbon bomb” by environmentalists, Galilee coal will create substantially more CO2 each year than Australia’s entire current annual greenhouse gas emissions.

The Adani situation is a neat microcosm of the entire problem with the Big Three’s approach to carbon — or rather, its lack of an approach. Moody’s used a generic project finance methodology to assess the investment risk, the same method it uses for non-carbon intensive projects, such as parking garages. That methodology assigns only 15 per cent weight to exposure to event risk, 25 per cent to long-term commercial viability and a whopping 60 per cent to cash flow stability.

And Moody’s vastly overvalued the price Adani coal will fetch on the market — $84/ton when prices at the time of rating were just above $70. And India, where Adani plans to sell most of its coal, six coal plants have been postponed or dumped for every one built, while the government has announced plans to vastly upscale its use of renewable energy.

This is all in addition to the likelihood of major disruptions to mining operations from a spike in extreme weather events along the Australian coast, such as more ferocious cyclones, high temperatures, and heavy rainfalls that can flood the mines, shutting them down for months.

All of which could lead the rating industry back to one of the ugliest moment in its legal history.

Following the 2008 crash, large institutional investors – most notably, CalPERS (California Public Employees Retirement Systems) – sued the rating agencies. In the CalPERS case, filed against Moody’s, the court brushed away the agencies traditionally successful defenses, and approved the suit going forward on the basis of a negligent misrepresentation claim. The CalPERS appellate court opinion quoted an expert who said the ratings agencies 'had no empirical or logical basis of assumption' for the ratings it gave to the financial products CalPERS purchased.

Moody’s settled — a development that would have been almost impossible to conceive a few years earlier.

Adani's Carmichael #coal mine project is well on course to become a massive stranded asset. Who's listening? http://t.co/42fE6QpKu9

Based on Moody’s handling of the Adani bonds, one could easily imagine a similar expert opinion in a climate lawsuit, and a similar outcome.

That could turn out to be a legal roadmap to doom that convinces the Big Three to take a more realistic view of what the future holds for fossil fuels.

This story was originally published by DeSmogBlog on 24 June 2015 under the title 'Are Coal, Oil and Gas the Subprime Assets of the Future?' and has been republished with permission.

@GregHuntMP Minister, numbers don't add up. Prime ag must not lose out to #Shenhua. Project is stranded asset a dog https://t.co/IWSAXmxn2N

3 April 2021, 11:00am The American oil industry is linked to a history of racism, a legacy that remains ...
Join the conversation
comments powered by Disqus
News updates