By pulling all the ads from the Alan Jones Show, 2GB is losing money hand over fist — but have they learnt from the experience? Alan Austin suggests not. 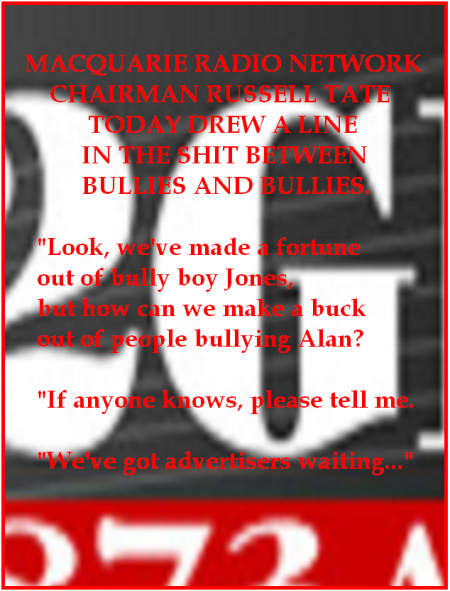 THIS WEEK, 2GB suspended all advertising during its top income-earning breakfast timeslot. Estimates put Macquarie Broadcasting’s losses at about $400,000 per week.

The boycott of Alan Jones has clearly been effective. But has it been successful?

These two terms have precise definitions according to social scientists who study these things.

According to Jill Klein and Andrew John here in France, effectiveness is defined as impacting the target company or organisation. Success is getting the organisation to take the action the protestors demand.

By these definitions, it is possible for a boycott to be effective but not successful — and vice versa. Sometimes a credible threat can persuade an errant operator to change direction.

Evaluating its success, of course, depends on the outcomes sought. On these, there are differences among participants. At least seven desired results can be identified. These include for Jones to:

Clearly, those with the minimalist goals of 1 or 2 have won already. There is no sign of 3, 4, 5 or 6 being realised yet. In fact, quite the opposite. Few advocate 7. Most accept Jones is entitled to freedom of opinion and speech like everyone else ― but don’t want him rewarded for them by money we give to Woolies.

[Disclosure: I have participated in this campaign, pursuing outcome 6, and am happy to post relevant correspondence in any ensuing discussion.]

The reasons people participate in boycotts are also the subject of academic inquiry. There appear to be three distinct motivations: ‘instrumental’ ― seeking to effect specific reforms; ‘expressive’ ― seeking to have a voice of protest heard and acknowledged; and ‘clean hands’ – wanting to be free of any taint of involvement in a social evil.

Each of these is evident among anti-Jones protesters. They sometimes co-exist. [In my case, about 70% instrumental, 20% expressive and 10% clean hands.]

There are several principles learnt from history ― something 2GB seems not to understand.

Firstly, boycotts are legitimate. There have been many over the millennia, since homo sapiens along the Danube refused to buy from flint vendors who charged too many clams. The difference is that participants now use the internet rather than cave drawings to gain support.

They have been used by the right and the left, by the religious and nonreligious, and by individuals, groups and nations. They frequently work. The world is generally a safer, cleaner, better place for their implementation.

History also suggests it is unwise for Jones to mischaracterise the response as merely “bullying” or “harassment” or “intimidation”.

Then again, as Mike Carlton observed last weekend, wisdom is not Jones’ strength:


‘Something to know about Alan Jones – the key thing, really – is that he's not all that bright. Far from it. Despite the artfully constructed public persona, there is no powerhouse intellect there, no vast store of wisdom ... He does not have to dumb down for his audience; he's already there.’

Forty years ago, Saul Alinsky in Rules for Radicals wrote that the boycott organiser’s job is ‘to manoeuvre and bait the establishment so that it will publicly attack him as a “dangerous enemy”.’ This, he claimed, will ‘not only validate [the organizer's] credentials of competency but also ensure automatic popular invitation.’

The key error Jones and his superiors at 2GB seem to be making is in misunderstanding the protestors’ complaints.

From the various online groups, it is clear there are long-held, deep-seated concerns at Jones’ activities on many levels. These include: his history of fabrications; receiving secret cash payments for on-air comments; fomenting racial hatred and violence; abuse of staff; ridiculing and censoring callers who challenge his facts; unbalanced treatment of political parties; crude sexist attacks on the Prime Minister; false accusations against political opponents; calls for the death of political enemies; public vilification of those he disagrees with; hypocritical exploitation of charities; the hypocrisy of calling for direct community action, but complaining when the community acts directly against his excesses; and, finally, his hollow apologies when cornered.

It is not just about one recent appalling slur against the PM. The influential Facebook page Destroy The Joint was set up long before the infamous Young Libs gathering in Sydney:


This page was started 5 weeks ago after Alan Jones accused women in leadership positions of “destroying the joint”. We weren't to know Jones would make even more hateful and disrespectful comments about the PM & her late father.

We hoped to make a change - and a community of people who feel the same has been built.

Do we want him to lose his job? No. We want the freedom to say that this is NOT acceptable to us …

That's our freedom of speech. Respectfully, thoughtfully and passionately.

Spokesperson Jenna Price expanded on this in a robust exchange with 2GB’s Chris Smith on Monday. On air, Smith asked Price to meet personally with 2GB executives.

The current cyber campaign is certainly passionate. But what will it actually achieve? At $80,000 a day, we shall soon see.