State border restrictions have been an important tool used by state and territory governments to protect their citizens from COVID-19 but unfortunately, the ABC has reported on these restrictions in a politically biased manner.

I’m from Tasmania; that’s where my family lives but I can’t visit them as the border is closed to Victoria. You wouldn’t know it, though, from following the ABC’s coverage on border restrictions. Tasmania’s closed border is scarcely mentioned in comparison to the coverage the ABC has given to the border closures in Queensland and Western Australia.

If you’re in a Labor state and you’re thinking that the ABC has covered your state’s border closures in a more critical fashion and more frequently than the border restrictions in Liberal states, your thoughts would be correct. Excluding articles covering the breaking of border restrictions, border legal challenges and speculation over the Ashes, ABC News has published 73 articles on border restrictions so far this month and the majority have been written about Labor states.

Of course, the above analysis only covers the period of 1–20 October, but this is a continuation of the same biased coverage from the ABC that we have seen throughout the pandemic. If you go to the ABC News website right now and search the phrase “slams border shut” or “hard border” there won’t be any prizes for guessing which states’ border restrictions are regularly reported with such editorialised language.

Before providing commentary from locals on how their state has maintained a relatively normal life during COVID-19, the segment opens with:

“From the banks of the Swan River to the waterways of Brisbane, the capitals of Australia's two largest states have mostly escaped COVID. It's as if the pandemic has yet to arrive.”

Yet, Tasmania and South Australia are the two states in Australia with the lowest overall case numbers and they aren’t even mentioned in this story that focuses on “COVID free” states with border restrictions. According to this story, there are “real costs” to isolating your state from New South Wales and Victoria but apparently, those costs only affect Queensland and Western Australia — Tasmania and South Australia are somehow immune to those costs. 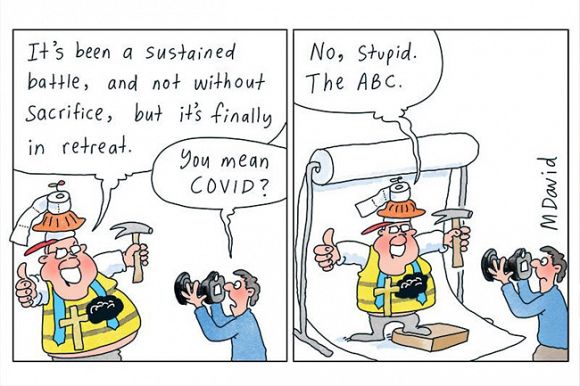 The ABC has shown a callousness in its depiction of objective news and a reluctance to draw on the essence of the journalistic remit that has defined it.

So why is there no “mounting pressure” on Tasmania and South Australia to open their borders and ‘explain what living with COVID-19 will look like’? Considering the statistics presented in this article, it would appear that “mounting pressure” is just selective media coverage, a simple case of finding the right business owners, medical experts, “stranded citizens” or opposition leaders to complain about border restrictions. It’s just another one of the mainstream media’s self-fulfilling prophecies.

Make no mistake, if the ABC wanted to portray “mounting pressure” on the Liberal states of Tasmania and South Australia, they could easily do so. There is always someone quite happy to get their face on national television.

It should also be noted that throughout the pandemic, 7.30 has been in direct opposition to the hard and fast lockdown approach taken by Labor states and regularly praised NSW for their “last resort” approach to lockdowns.

Perhaps the ABC isn’t anti-lockdown or anti-border restrictions but is simply anti-Labor.