Walkley Award-winning reporter and writer Quentin Dempster says the decision to appoint Minerals’ Council chair Vanessa Guthrie to the ABC Board was a “direct ‘political’ choice” that is “provocative and revealing”. As Doc Martin reports, it seems to many like a return to the bad old days of political stacking.

THE MOVE to appoint Vanessa Guthrie, against the advice of an “arms-length” process, follows years of “arrogant disregard” by the major political parties to complaints about “stacking the ABC Board with political partisans,” says veteran reporter Quentin Dempster.

Dempster also told Independent Australia that Guthrie “misunderstood” the importance of being an effective lobbyist for the national broadcaster in front of Parliament and the Government.

Quentin Dempster is a former ABC staff representative on the ABC Board and now an outspoken critic of successive governments cutting funding.

He hopes the plight of the ABC and SBS will become a major issue at the next federal election.

“All Australians who want our public broadcasters to contribute to a sense of national identity and multi-cultural cohesion will have to stand up for these institutions.”

The well-loved broadcaster and journalist says Michelle Guthrie “stuffed up” in her role as managing director of the ABC in front of the Senate Estimates Committee at the end of February.

Traditionally, the public role of a managing director has been “to build bridges with the government and the parliament and specifically with the Expenditure Review Committee to secure additional funding," Dempster says.

Failing this, Dempster says, the MD should “at least try to diminish Treasury’s claw back tactics.”

Another ABC service bites the dust

Before the Senate Committee on 28 February, Guthrie was grilled about the ABC’s decision to cut shortwave broadcasts across the top end and for Radio Australia. The ABC boss said it was a management recommendation to the ABC Board.

The Senate Estimates committee will be further examining the ABC’s shortwave decision — and the research Guthrie says supports it, without her help. The ABC’s busy MD told the committee her diary has been full since December last year.

At the late February meeting, NT Labor Senator Malarndirri McCarthy asked directly for the ABC Board papers on the shortwave decision.

Guthrie said they were commercial-in-confidence, but on a point of order, McCarthy got her to take the question on notice. It was a fiery exchange, but the committee didn’t get the ABC’s data — yet. 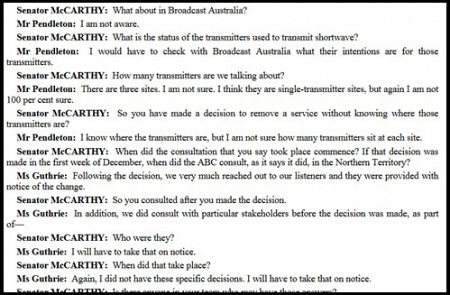 The Senators were not happy and eventually cornered Guthrie on the question of privilege. Labor Senator Sam Dastyari pointed out that the MD had not sought immunity from tabling the documents. 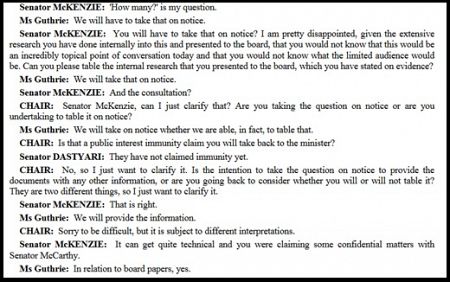 This is worth watching. If you’re keen to help chase up the information get in touch (Image screenshot Hansard, 28/2/17)

Another Guthrie joins the ABC Board

The Senate committee also questioned Michelle Guthrie about the appointment of Vanessa Guthrie to the ABC Board. Vanessa Guthrie is no relation, but she is the current head of the Minerals Council of Australia. 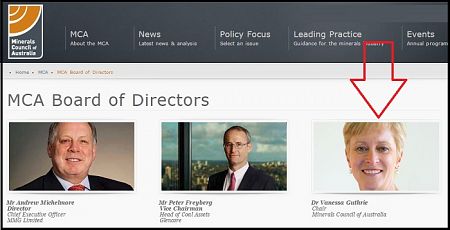 Ms Guthrie was appointed to the ABC Board by Communications’ Minister Mitch Fifield, despite not making the short list recommended by the committee supposed to make the decision at arms-length.

Guthrie’s concurrent roles as MCA chair and ABC Board member have also raised serious issues about a perceived conflict of interest.

The ABC has, at times, been forthright and outspoken about climate science, and this is at odds with the economic and ideological interests of the mining industry and its coal-loving lobbyists.

Will Vanessa Guthrie attempt to change the ABC’s editorial position on climate science, as disgraced former board member and Murdoch spruiker Maurice Newman tried and failed in the past?

It’s a serious question, which deserves a serious answer — so I put it to Quentin Dempster.

"If Vanessa Guthrie wants to change editorial guidelines to limit ABC reporting to economic benefits of coal-fired power she has every right as a director to attempt so to do. But after the ABC experienced the guiding hand of former chairman Maurice Newman, who insisted that ABC journalists had to be “agnostic” about the issue, her reasons to change editorial policies away from objectivity should be publicly released."

Dempster is says he is wary of conspiracy theories surrounding Michelle Guthrie’s appointment. Despite appearances, he doesn’t think she’s a Murdoch plant.

“There’s a degree of understandable conspiracy theory here. Mainly because of the relentless vilification of the ABC from the Murdoch Press and its ranters.”

Dempster thinks Guthrie has some understanding of what the ABC is facing in retaining its trust and audience loyalty in the face of competition from Google, Facebook and Netflix. When she was appointed in May last year, the ABC Board believed Guthrie’s experience “could be valuable to the ABC’s survival and long term audience support,” Dempster concluded.

The next few months leading up to her anniversary around Federal Budget week will be interesting to anyone with an interest in ABC-watching.

Tough days ahead for the ABC MD

It seems that in the days and weeks to come, Michelle Guthrie will have her hands full with the scheduled $50 million "savings" exercise and prepare a Budget submission.

Dempster believes Guthrie’s experience over the past two weeks has given her a wake-up call.

“I think she now realises that advocacy for funding is a big part of her job as it is for the ABC Board in preparing triennial funding submissions.”

As for the prospect of the current Government breaking up the ABC, Dempster says it’s unlikely to get through a hostile Senate.

“Even if the Turnbull Government wanted to privatise the ABC it is not a good prospect. It has no commercial cash flow worth privatising. To break up the ABC and sell if off would require legislation which would be unlikely to get through the current Senate.”

Whose bl__dy job is it then. https://t.co/3j8oXv8gOu Politically motivated to drive the ABC into the ground. Hopeless MD. #auspol @abc

Dempster also says it’s clear that staffing an organisation “with reduced appropriation but increasing salary and operational costs is a very big challenge”.

It is also inevitable that more, less fun, work is piled onto those who are left behind. That is unfortunately what is happening inside the ABC today. It is an unhappy workplace for many, particularly those in the frontlines of the cuts.

In the coming days and weeks, Michelle Guthrie will also be facing hostile meetings with staff; 200 are slated to go, including 80 production staff.

According to Dempster, any cuts to support roles that are production-related – video editors, camera and audio operators – will have a big impact on content:

“I’m sure program executive producers will start screaming if the staff cutbacks impact on their already stretched resources capacity, given the daily demands of the radio, TV and online schedules."

#ABC managing director Michelle Guthrie has indicated that the latest round of job losses at the broadcaster may not be the last pic.twitter.com/c0xoIkTgUd

In fairness to Guthrie, Dempster points out that she has inherited an ABC already in decline through the Abbott/Hockey 2014 Budget cuts and the loss of the DFAT contract for Australia International.

“The ABC has also lost special purpose funding. [Guthrie] has closed the Fact Checking Unit and the investigative unit in news as a consequence.”

Finally, I asked Quentin Dempster what he thinks life is like for the thousands of dedicated, intelligent and committed ABC staff who face this uncertainty every day.

The ABC in decline is not a happy place. But there is one redeeming resilience to working there in hostile political and financial times.

Program makers have to come in every day knowing that they have to get content to air … and that is the creatively empowering cultural force within the ABC.

You always hope what you’re putting to air could be better but you’ve got a creative opportunity to give it your best shot with the available resources.