A broadband horror story from TPG 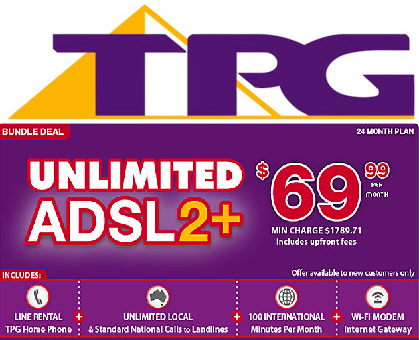 I WAS CONTACTED by a reader the other day, who told me a tale of customer service so hideously bad it was unbelievable.

The company she was having issues with was acting like a Truly Pathetic Grub ― which may be how they came about naming themselves TPG.

She had been advised by a friend that TPG’s plans were reasonable and so she decided to check out their plans for herself.

That was her first mistake, but unfortunately not her last.

Her next mistake was to fill out an online application for one of their plans. From there on, there was seemingly no turning back...

As you can see from the link below, TPG were unable to provide her with the service that she was requesting. 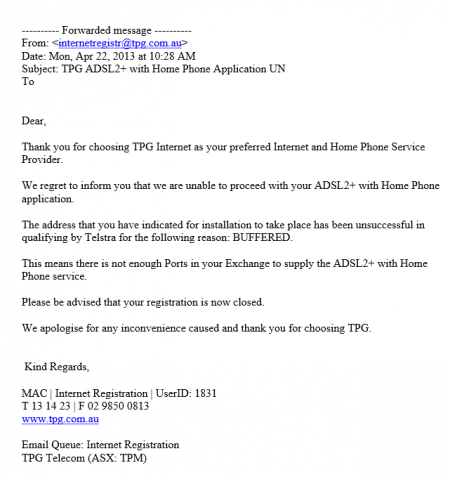 TPG stated in this email response to her request:

The address that you have indicated for installation to take place has been unsuccessful in qualifying by Telstra for the following reason: BUFFERED.

This means there is not enough Ports in your Exchange to supply the ADSL2+ with Home Phone service.

As a result of this, another option was sought, Optus was chosen and an online application was completed ― as it had been for TPG.

Whilst waiting for Optus to come back to her, TPG had a change of heart and told her that they may be able to indeed connect her service, despite their earlier advice, and asked if she would like to proceed with her application. Having not yet had a confirmation from Optus, she said yes.

TPG then sent an email, linked below, to tell her where the application was at. It is to be noted that it states there is no fee owing, it would take between 10 and 20 business days to connect and that on they had got as far as verifying her address. 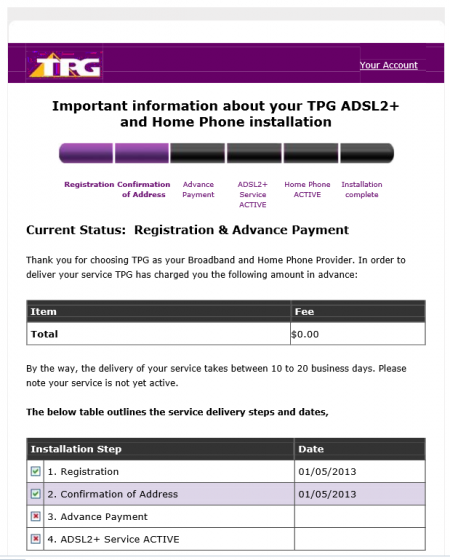 At this point, Optus contacted their potential customer to inform her that they could connect her to their service, which was at least five times faster than TPG, in two days as they had cable available in the area.

Naturally, Optus had themselves a new customer.

An email was quickly sent off to cancel any action intended to be taken by TPG, seeing as though there was no fee owing and TPG had only reached the confirm address stage according to their correspondence. 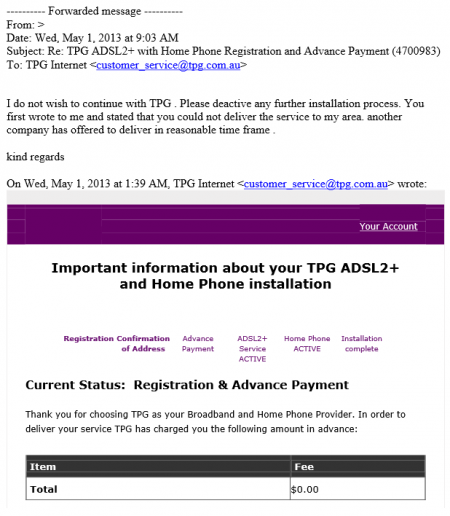 TPG sent an email to confirm that they had received the cancellation and that someone would be in touch.

From that moment on, things became hairy; and I don’t mean in a clean, shiny, blowing in the breeze kind of way ― I mean like the gross hairs hanging out an old man’s ears way.

Apparently, confirming someone’s address is very pricey process, if TPG are to be believed, because below is part of their response:

According to our Standard Terms and Conditions which you agreed to as part of the sign up process, an agreement is formed whereby you apply to acquire a service from us and we accept your application.

Installation of your service has already commenced in our system based on your application which we accepted on 25/04/2013.

The contract you entered into specified a total minimum charge of $2,029.71 over the contract term which you are liable for. We have decided not to charge you the full amount, however you are required to pay a cancellation charge of $350. Plus $480 cancellation fee for the super unlimited bundle. A total of $830 fee will be incur to cancel the account.

How nice of them to not charge the full amount. If anybody out there wants an address confirmed, as that is as far as they’d reached, I’m happy to do it at half of TPG’s rate.

This is despite TPG’s own chart ‒ shown below ‒ that indicates the next step in the customer application after “Confirmation Of Address” is “Advance Payment”. Given the application was cancelled at this point, and the same letter stated no fee was owing, I’d assume there is nothing to charge the customer for. 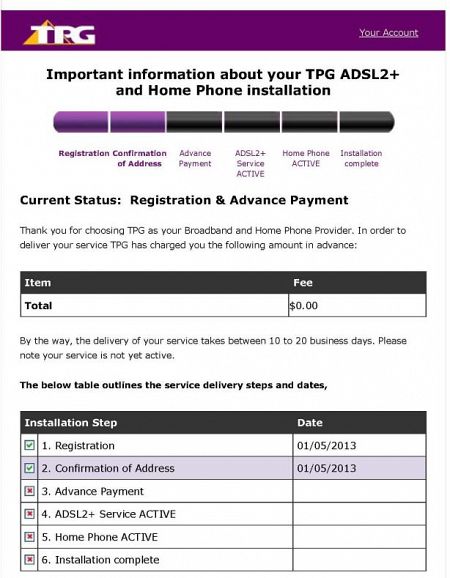 Since this point, TPG have been waging a campaign of harassment, calling repeatedly each day and demanding the $830 or they will continue with processing the connection. These calls have been made to both my reader’s mobile phone and her place of work, causing an awful lot of stress.

TPG seemed intent on harassing and bullying a consumer, who was only exercising her right to choose her service provider, until she paid $830 to TPG for providing no service at all other than sending the original notice stating they were unable to provide the consumer what she was originally seeking.

This bullying and harassment has continued unabated all this month. My reader was also advised by TPG that despite being told daily that she did not want their service, TPG had arranged for a Telstra technician to come out and do the connection, something that may actually incur a cost on TPG’s end.

The Telstra technician didn’t turn up as threatened, but the harassing calls still continued.

Last week I contacted TPG myself in order to hear their side of the story, and I saw just how frustrating it must have been for my poor reader.

I contacted customer support with the details of the reader and spoke to a young man named Ariel. He informed me that due to privacy reasons they could not discuss the particulars of a case with anyone but the client, which is fair enough.

I asked to be put through to whoever was in charge and said I only wanted to understand why they were trying to charge $830 without performing a service, and then harassing and bullying the poor soul on a daily basis. I made it clear I did not want to discuss anything about the account that would be considered private and was writing an article on the matter; if they wanted their side of the story to be told, they best tell me what it is.

After much discussion with things going seemingly nowhere, I was finally told a manager would not talk to me, that there was absolutely no record of my reader on their system at all, and that I must have the wrong company.

Given that I wanted a record of the conversation to refer to I asked for the recording number, if you work for TPG and are reading this you can look up the record it’s number 180955.

Miraculously, TPG must have used their psychic powers of observation, because moments after I was off the phone, my reader for whom they had no record or detail of just moments ago was being called yet again. How odd.

This time, my reader was told by TPG the service was indeed cancelled and apparently could not seem to understand why my reader was so upset; the recording number for this call is 2784788 if someone from TPG wants to check it out.

Time will tell if this sorry saga is over, although I fear not as another email was received the day after this call saying:

We would like to advise you that the installation is still in progress at the moment. We are still waiting for confirmation on the status of the job order.

Please check your service in the next 24 hours and should you encounter any issues, please feel free to reply to this email or contact us on 1300 725 322.

We appreciate you choosing TPG.

The matter has now been reported to the Telecommunications Ombudsman.

For those of you looking for a broadband solution or any other type of solution, I would avoid TPG like the plague.

Judging from these links, I don’t appear to be the only one who thinks so — far from it in fact.

If you are having an issue with a company and have the documentation to back yourself up, you can email me here and I will let my readers know about it. I’ve decided to take a leaf out of Derryn Hinch’s book and start my own “Shame File” of companies who bully, harass, and seek to rip-off the consumer.

TPG is no doubt the first of many.