There is no conflict at all between watching the Royal wedding, or even going to a wedding-themed party, and being a republican. There is also no point in either false bravado or woe is me among republicans. Some republicans may have had their confidence shaken by the tsunami that was the wedding between Prince William and Kate Middleton. Apparently over 70% of Australians watched at least part of the proceedings. Perhaps The Australian newspaper is right and it has been an annus horribilis for Australian republicans.

At the same time there is no doubt that as an organization the ARM has benefitted from the wedding coverage. It has given us a rare platform and it boosted our membership numbers. In the week before and after the wedding we enrolled 105 new members and supporters. That is our best fortnight for some time. So the issue cuts both ways. A SMH Online readers panel showed 30.5 per cent felt stronger about Australia becoming a republic and 47.3 per cent thought it was just a bit of fun. 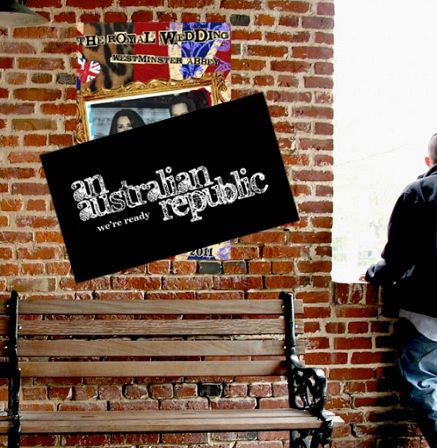 The obvious brief answer to the question is that the republican movement is not a cause worth fighting for if it can’t survive a British royal wedding. Constitutional reform is not about personalities; though republicans have been guilty too in the past of playing that game by gloating over Charles’ unpopularity.

Of course the republican movement saw the wedding and William’s earlier trip to Australia as a challenge. We spent time in committee discussing the appropriate response to questions about what republicans thought about it all. We had been criticized earlier by some media, including The Australian, for being too harsh on William and too grim. I liked Kristina Keneally’s response that as a proud republican she would drink to the republic with one hand and to the good health of Wills and Kate with the other. In the end we decided to take the platform offered, meaning probably fifty or more media interviews by our spokespeople, and to use it to state our case, trying to avoid any semblance of personal attack or criticism of the event itself, while lightening the tone as much as possible. After the event, as a gesture, we placed advertisements in some media calling for support for our cause.

The evidence for any impact is unclear and/or too early to say; but what there is suggests to me that Australian republicanism can survive the wedding quite well and anyway has bigger and more immediate problems than Wills and Kate. Their names are Elizabeth Windsor, Julia Gillard and Tony Abbott.

Elizabeth still inspires enough affection among Australians to probably tip the balance against change during her reign. Polls show that she regularly adds 5% to support for the status quo. However the idea that we should just wait makes no sense at all.

(By the way if William does become King of Australia it is likely to be in about twenty years time when he is about fifty. The best guess of those who study life-spans is that Elizabeth will live until she is about 93 and Charles until he is about 83.)

Julia speaks with no conviction about her own republicanism, seemingly without any instinctive warmth towards the idea.

Tony, British-born and Oxford educated, comes from a family background that lacks the usual Irish-Catholic attraction to republicanism.

Two recent public opinion polls claimed to link the wedding to the monarchy-republic debate. One was taken just before (Newspoll) and the other just after (Morgan). Both show a similar long-term trend away from support for an Australian republic, with the absolute levels lower in the Morgan poll, which even suggests that the republic has been blown out of the water.

The more reliable poll was the Newspoll a week before the wedding that also brought relatively bad news for republicans (41%Republican; 39%Monarchist; 20DK), but also more insight. Both polls rank William higher than Charles in Australian estimation, but no higher than his grandmother Elizabeth. In fact, the Newspoll shows that support for an Australian republic is much higher (5-10%) under either Charles or William when compared to Elizabeth.

That is not to say that republicans shouldn’t take the Wills and Kate phenomenon seriously; of course we should. Republicans should also learn from the experience of the Royal wedding, in order to be able to better communicate our case.

So what are the lessons for the republican movement?

First, it was a spectacle of lavish pomp and ceremony. Republicans shouldn’t try to match this at all, but we should recognize the role of theatre in politics and society and not ridicule it.

Secondly, it was an unambiguously British event and ties with Britain still have some appeal. Britain is still seen as a great and powerful friend by some Australians, especially those who doubt our ability as a nation to play an independent international role. There is insecurity and cultural cringe wrapped up in this false perception.

Thirdly, when constitutional matters did arise in discussion there was little evidence that viewers linked the wedding to reform proposals. When links were made the usual confusion reigned: matters like travel and work rights in Britain and membership of the Commonwealth were mistakenly thought to be relevant. A big community education task remains.

What is the likelihood of Australia becoming a republic in the short to medium term? My realistic best guess is that the odds are no better than 50:50 that Australia will do so by 2031 (i.e. before William).

That timetable makes no sense at all to me; change may well happen sooner; but William and Kate are not the main impediments.


(This story was originally published in Volume 66, the July 2011 edition, of the Australia Institute newsletter and has been republished with permission.)