Waiting for Her Majesty to die

It is morbid, irresponsible and disrespectful for Australia’s constitutional future to be resting on whether or not our Head of State succumbs to the inevitable, writes Scott Crawford. 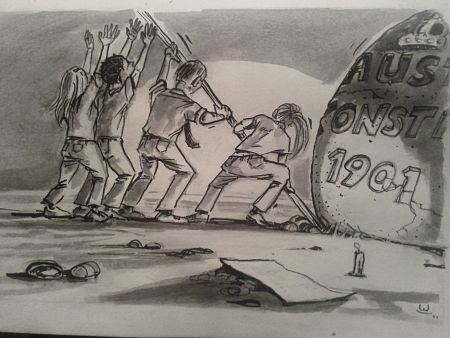 Australia is waiting for Queen Elizabeth to die. These words may seem callous in the context of the Queen’s jubilee, but I make no apologies. They are an accurate assessment of the contemporary republican debate in Australia. The Prime Minister, despite being a republican, has adopted a stance on constitutional reform that is akin to palliative care.

It is demonstrably morbid, irresponsible and disrespectful for Australia’s constitutional future to be resting on whether or not our Head of State succumbs to the inevitable. If we truly respected the Queen, and the great history of public service her family represents, we could at least raise the issue. Why not even have some debate? By not discussing the matter we show either gross apathy or political immaturity.

How can it be that we speak of an Asian Century, but are happy to be shackled to a system of hereditary rule centred half a world away? Why is it that a constitutional monarchy is acceptable under Queen Elizabeth, but it would not be acceptable without her? Is the issue with the monarch or the monarchy? If we know the monarchy will not suit us in the future, then why does it suit us now? The arguments are the same, whether or not we have Queen Elizabeth or King Charles — any affections aside.

Monarchists may have some misguided faith in the potential reign of Prince William and the Duchess of Cambridge. However, why should we be content to have a head of state that has spent less time in Australia than the average Irish backpacker? Thinking rationally, the Windsor who has spent the most amount of time in Australia is, in fact, Prince Charles, due to his studies at Geelong Grammar. The cold truth is that we don’t get to choose who will be our monarch, but we can choose whether or not we have a monarchy.

Simply waiting and keeping mum achieves nothing. In the future, if a flag were to be lowered to half-mast at Buckingham Palace, we would still be years away from a republic … because the work, debate, and campaign must start years in advance.

Her Majesty is the most distinguished public servant in the world. She has seen her Empire diminish, and has faced it with composure. I am sure that she would view an articulate and robust debate about Australia’s future with respect: it’s a shame there isn’t a similar feeling here at home.