THE ENERGY and vigour of new beginnings at the start of university life resonates with the future possibilities of an Australian Republic.

A way forward, rather than looking back.

There are now the following university republic clubs on university campuses:

The University of Queensland Australian Republic Club is one of the most active university republic clubs on Australian campuses and has been involved in Republican movement activity on campus since the early 1990s.

For me it’s about fairness. It’s not fair that Australians don’t get to have a say on who their head of state is, and it’s not fair that, while we have the British monarch in that position, a deserving Aussie is missing out.

All government positions should be chosen on merit in­stead of family connections.

Australia is one of the most democratic countries in the world, so becoming a republic will celebrate this tradition and make people appreciate what Australian citizenship means.

The UQARC hopes to start a discussion of the issue among students.

People are going to talk about a republic more and more the closer we get to the end of the Queen’s reign and the prospect of Charles as the King of Australia.

It just makes sense that Australia should have an Australi­an head of state — if we were writing the Constitution today, would we pick the leader of another country for our highest office?

Mr Green also encouraged students to come down to the UQRAC stall in the Great Court. But you know the future of our nation is in good hands when you see a koala in an Australian Republic Movement shirt grooving on to Cold Chisel’s Khe Sanh.

Australia is a country of merit and reward. That's why we worship sports heroes, those such as Bradman who mastered his craft with a golf ball, a wooden bat and a water tank. That's why those born into wealth and privilege are expected to prove themselves and help those without, and why we so instinctively support the underdog.

We have forged our nation, our own identity and our own set of values. We are a nation of builders, and we earn our own crowns. From the remnants of our colonial past, we have built something of our own. A nation by no means perfect, but a nation of our own. A nation shaped by land, climate, history and shared experience. A nation with culture, passions, food, sport, music and humour of its very own. We have built this ourselves from the ground up, and the fact the Queen can just pass by and be adorned with our crown and eternal love should insult every one of us.

It’s time for a new conversation about Australia, our identity and our responsibility, and to take the future into our hands as a fully independent nation. It is heartening to see young Australians of all political colours and persuasions all around Australia wrestling with these ideas.

It’s time we stopped limiting future generations. We must tell them an Australian is good enough to be the head of Australia. We need one of our own in the top job. We are a people who believe in fairness and in a fair go for all. So why is the top job in Australia limited to someone overseas who was born into it and never earned it? Our shared national values mean that any Australian should have the right to our top office rather than complete exclusion from it.

Australia’s best and brightest university students appear to have already embraced these ideas.

On 6 November 1999, the Australian Republic Referendum failed, but now it seems Australia's youth are beginning to "mend the nation’s heart". 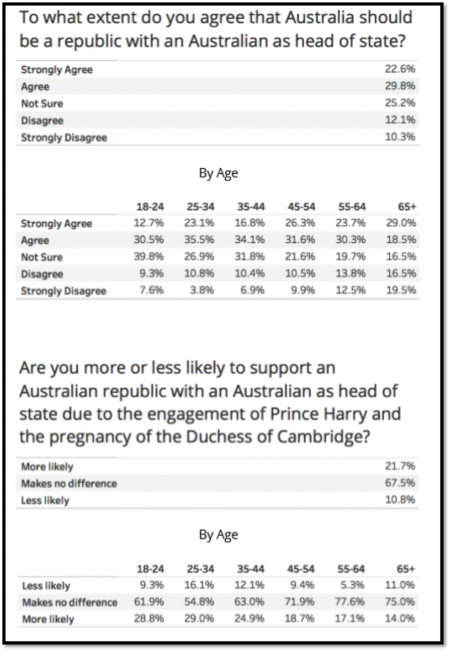 Support an independent Australia. Subscribe to IA for just $5.