The stability of monarchy myth

One of the most enduring myths about the monarchy is that it is a more stable form of Government. Graham Smith disproves this assertion conclusively in this piece.

A LITTLE WHILE ago I received this email from Mark. It’s a lot of the same sort of argument we often hear but he neatly outlines some of the more common monarchist objections so I thought it would be a good way to counter these persistent myths.


Constitutional monarchies have proven themselves to be the MOST stable form of government.

Republicans often point to Germany and France as “good” examples of republics, but neither of these countries constitution are as old as the UKs, nor have they experienced the same difficulties over time.

A constitutional monarch provide an apolitical head of state, NO republic has been able to achieve this. A President selected by parliament is nothing more than a puppet of the parliament.

A president elected by the people (the one most republicans wants) is the worst kind of republic. Look at Americas Presidential campaigns; they cost millions upon millions of dollars. The ordinary person would NOT be able to run for president. The only people who could run for president would be:

This would turn a job which should be apolitical into a political position. The President would have a mandate to the people whom elected him/her, a mandate which may not correspond with the governments. This would cause many difficulties for the government when trying to run the country (e.g. president refusing to sign a law into power because it goes against what he/she was elected on). Not only that but the President would be in the pocket of those who got him/her into power, i.e. giving favours who got him/her elected.

Let’s turn first to the claim for stability and the statistics Mark raises. It may well be true to say that European monarchies are well represented in lists of the ‘most stable’ or the ‘most developed’ nations, but that proves nothing about the quality or value of monarchy as an institution. My first question to Mark and other monarchists is this: can you demonstrate or elaborate on the causal link between a country having a monarchy and being well developed? 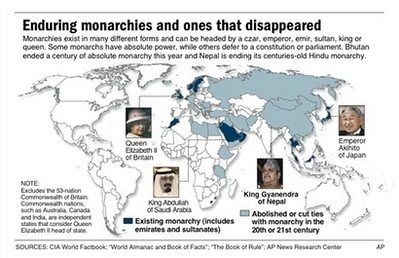 And if monarchy is good for development then why are countries like Bhutan, Nepal (until recently), Thailand and Tonga so under-developed?

Of course there is no link between development and the monarchy, at least not in the sense meant above. The correlation between stable countries and the existence of monarchy is far easier explained if the relationship is reversed: in other words, countries aren’t stable because they have a monarchy, monarchies survive if countries are stable. They survive because there haven’t been the internal pressures to abolish them, or they have successfully adapted to those pressures in order to survive.

I’ve already mentioned some less developed countries which are monarchies, so Mark is obviously wrong to say all undeveloped nations are republics. He is also wrong to bundle all ‘republics’ into one category, putting France, Ireland and Germany in with Zimbabwe and Ethiopia, just as it would be wrong for us to point to Saudi Arabia and Thailand as reasons for not having a monarchy. Mark is also wrong in saying monarchies have ‘proven themselves to be the most stable form of government’. This is clearly not true otherwise the world would still be dominated by monarchist nations. The reason it isn’t is because monarchies have proven to be deeply unstable and have collapsed or been overthrown.

The real problem with Mark’s argument however is that it supposes that what happens elsewhere will reflect on what happens here in Britain and in Australia. This argument by comparison is quite common among monarchists who like to pretend that we will suddenly lose our senses and become Zimbabwe-esque simply because we’ve chosen a more democratic constitutional model. What they willfully ignore is that Britain and Australia are privileged countries with a stable history and a mature political culture. They will continue to be prosperous and stable regardless of whether we have a monarchy or a republic, but with a republic we will offer ourselves the chance to also be more democratic and to have a political system that better reflects the concerns of ordinary people, and which protects the rights of ordinary people. And with a republic we will have an effective head of state and a political system which inspires aspiration.

In objecting to a directly elected president Mark conflates two different types of republic, the parliamentary model we propose and the US executive model. In the executive model the head of state would indeed be partisan, and rightly so. It is a political office. In a parliamentary model we can elect someone to a constitutional position which requires neutrality and impartiality and, unlike with a monarchy, we can scrutinise and observe that impartiality and hold the president to account if they step over the constitutional boundaries of their role.

It certainly isn’t correct that a president in a parliamentary model could refuse assent to an Act of parliament on political grounds, she could only object on constitutional grounds. And even then their judgement would be tested in a court. That is a good check against the government and parliament should they wish to do something unconstitutional.
REPUBLIC arguments for monarchy Bhutan Graham Smith Jeffrey Wood Monarchists myths Monarchy Thailand
Recent articles by Graham Smith