The kooky Common Cause conspiracy theory

Lewis Holden responds to the conspiracy theory by a leading monarchist that Common Cause, the grouping of Commonwealth republican groups, is solely about making Australia a Republic. 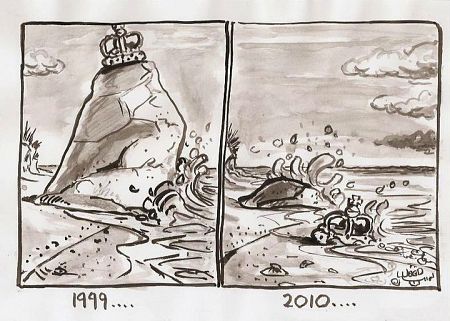 Since calling our favourite Australian monarchist to account appears to be the fashion of the day, it's time some other ridiculous claims by the leader of Australians for Constitutional Monarchy (ACM) were refuted. After all, according to Alexa – the website traffic ranking tool – hardly anyone reads the ACM's website which, unlike Independent Australia, must post ever more ridiculous claims because it needs the traffic.

One post caught my eye that deserves some attention. Days before the Royal Wedding, the leader wrote that republicans have formed some sort of "Colonial republicanism". Titled with a picture from the leader's own collection, it is claimed the Commonwealth republican movements, through our Common Cause alliance, are focusing our efforts on Australia replacing its politician's monarchy with a well-defined constitutional republic as part of a grand conspiracy. It's surprising the visit of Gerry Adams to Australia wasn't mentioned, but I guess a truce of sorts has been called on that one after the leader forgot to check the date on a certain Guardian editorial stating it was dropping its republican stance (hint: the date was April 1).

The claim is, of course, rubbish. The only evidence presented is an interview where the head of Britain's Republic Campaign, Graham Smith, commented on the Australian debate on an English-speaking Beijing radio station. The leader's total disregard for what Graham actually said has been covered by this website here. Interestingly, a link is provided to the audio, now hosted on the ACM's own website. I've not checked to see how or if it has been edited.

Apparently Graham's comments to Beijing radio "proves" that Common Cause is really a front for a pan-national republican conspiracy to make Australia a republic. This is as ridiculous as the ACM's previous claims that Australian republicans views are derived from racism or communism. At least some evidence is provided this time, albeit all of it totally wrong.

The fact is, Common Cause is an alliance that enables republicans to work together towards our separate goals. Almost everything we discuss enters the public arena and recent discussions on succession law changes provide an excellent example of this. In a way, it's a good model for what the Commonwealth should be like: sovereign, equal republics sharing a common heritage. Kind of like the adult international relationship we seek between ourselves and our former colonisers, and vice versa for Great Britain.

We certainly do co-operate and share information in a way that enables each republican movement to point out the idiocy of the monarchy. That, I suspect, deep down is what makes monarchists jealous - jealous enough for the leader to make stuff up about us. After all, the London-based British Monarchist League apparently seeks primacy over its former colonies, claiming to be comprised of members from "the United Kingdom and abroad" and to defend the role of the British Monarchy in the UK and the Commonwealth.

In Australia, the Australian Monarchist League started life as a branch of the London-based International Monarchist League, but disassociated itself in 1993 when it must've realised that being a branch of the British association wasn't a good look. The ACM came about at around the same time, clearly because of differences between the AML's own leader and other monarchists (if that's not the case, I apologise and look forward for the victorious winding-down of Australians for Constitutional Monarchy, since they've obviously won the debate and all).

There's now also an International Monarchist League in Australia, separate from the AML, formed in 2006. For an institution its proponents claims unites us, it seems the monarchists are somewhat divided.