The Christmas Island tragedy and our national sovereignty

Ross Garrad says that the Gillard Government can solve the "boat person" refugee issue, but it will take fortitude and tough decisions; the biggest threat is adversarial politics. 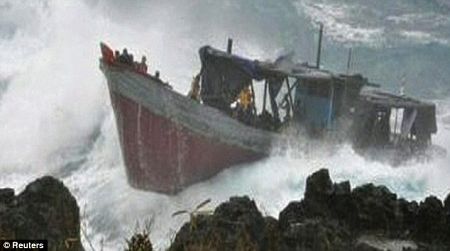 THE Christmas Island tragedy has focussed our attention on the problem of asylum seekers/unauthorised arrivals/illegal immigrants (take your pick), but the chances of it galvanising the government and the nation into action to actually find a sustainable solution look slim. With bodies still being recovered, the Gillard government was being attacked by both sides for having “blood on its hands”. Of course, the prescriptions being offered by the two extremes are vastly different, ranging from opening our borders to anyone who wishes to come, to towing all boats back to Indonesia...unless the occupants have the nous to sink their boats, of course.

What does this have to do with an Independent Australia? Plenty. The most powerful statement ever delivered on this issue came from John Howard, in 2001:
WE will decide who comes to this country and the circumstances in which they come.
This was, at its heart, a statement of national sovereignty, and it was accepted as such by a majority of Australians. Never mind that the issue was shamelessly exploited for partisan political gain, and the reality never quite matched the spin. The perception of toughness may have even discouraged a few people from trying the voyage, though other factors in the Middle East and Sri Lanka seem to have had a far greater impact on the waxing and waning of boat arrivals.

Some may say that 6,000 boat people don’t constitute a real problem, particularly compared to tens of thousands of illegal “plane people” in the same period. But in the TV age, we see the boat people but not the plane people, and in a democracy, if the majority of people think it’s a problem, it’s a problem. It’s certainly a problem for those who don’t survive the voyage, and for their families. It’s a problem for our national self-concept. And it’s a problem for our international reputation – regardless of the hypocrisy of those who attack a nation that’s right up there with Canada and the Scandinavian countries in our per-capita level of acceptance of genuine refugees.

So what is the solution? Let’s discount those “tough” solutions that would betray our sense of fairness and our international legal obligations, and the “soft” solutions that would betray our national sovereignty and potentially lead to the end of Australia as we know it. Not surprisingly, in addition to the unsatisfactory status quo this leaves two main options: Abbott’s revitalised “Pacific Solution” and Gillard’s “Regional Processing Centre”.

The former “Pacific Solution”, centred on Nauru, may have helped to reduce the flow of boats, though it’s difficult to be sure. But what IS certain is that more than 90% of those who spent months or years on Nauru were eventually allowed to resettle in Australia. This leaves the Pacific Solution looking a bit like a con-job, and while there is abundant evidence that many Australians would happily be conned again, the chances of re-conning the people-smugglers and their customers might not be so great.

A Regional Processing Centre, preferably located in East Timor, appears to be the best solution, and the government has an electoral mandate to pursue this. In its most rational form, it would make the voyage from Indonesia to Australia totally redundant: asylum-seekers who present themselves to authorities in either country, and appear to have a prima facie case for asylum, will be taken to East Timor for processing by the United Nations, and if found to be genuine refugees, would eventually be resettled in another country, that may or may not be Australia. Queue-jumping would not be possible. An orderly, multilateral, rules-based system, replacing a system of self-selection based on ever-increasing risk, is worth striving for.

There are many obstacles to this vision, both in Australia and internationally. No doubt there would be many in the UN bureaucracy, and in countries like Indonesia, who would prefer that Australia continue to take full responsibility for a problem that is not of our making. It’s time to toughen up, and exploit the fact that Australian taxpayers annually give hundreds of millions to the UN, East Timor and Indonesia. If that doesn’t buy us a bit of co-operation, we’re entitled to start asking “what’s the point?”

But the biggest obstacles are probably right here in Australia, in our poisonously adversarial politics and in a media-driven government culture that seems to value words more highly than actions. Does the current government have the guts to stand firm against special pleadings, mindless adversarialism, and the inevitable demands for watering down and destroying the integrity of a sensible solution? Are they willing to do whatever it takes, including legislative changes to our refugee procedures, and perhaps altering the details of our ratification of the UN Refugee Convention? Even to the extent of adopting some opposition suggestions if they’re appropriate? If the answer is yes, the Gillard government may yet “find its way” on this issue. But time is running out.
AUSTRALIA NEW AUSTRALIANS adversarial politics asylum seekers Australian sovereignty Boat people Christmas Island East Timor Julia Gillard refugees Ross Garrad Tony Abbott
Recent articles by admin