An important group striving for an Australian Republic is 'Republic Now!', which has as its motto: 'Rewrite the Constitution'. Here, convenor Dr Klaas Woldring gives an overview of their approach. 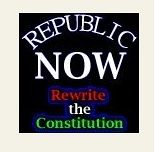 Republic Now! is a PRO REPUBLIC association! It is not an ANTI MONARCHY Association. The constitutional monarchies in Europe, e.g. the U. K., Norway, Sweden, Denmark, the Netherlands, Belgium, Spain enjoy considerable popular support in most cases. They have grown historically and, as they are constitutional, these monarchies do not have a great deal of political power at all. But they do have significant symbolic power. One could argue that they have become more or less like permanent symbolic Presidencies of a Republic. However, the royals in Europe are living among their citizens, are in close contact with them, and are seen regularly at major public events and functions. That is not the case at all in Australia. The House of Windsor is now very remote from Australian society and the Australian Government's decision making structures and processes.

This is a huge and real difference and, therefore, a Republic IS the logical form of state for Australia. It is not only high time to sever the umbilical cord but, even more, for Australia to actually assert its independence internationally. The most important issue really is "What kind of Republic?" should Australians aim at?


Republic Now! is committed to:


Merely changing the Head of State, a Minimalist position that has clearly failed to impress voters, should be abandoned altogether. Australia needs a strategic plan to develop governance reform on a broad front. None of the parties represented in Parliaments today have presented such a plan, least of all the major parties.