Refugee Week does little to restore hope for asylum seekers

To hear Prime Minister Tony Abbott and Immigration Minister Scott Morrison crow, you would think it defined a grand moment in Australia’s history — however Refugee Week 2014 does not mark a high point in Australia’s treatment of refugees.

Abbott has pronounced the ‘stop the boats policy’, to be a humanitarian success. He has now dubbed it “stop the deaths at sea” and “we have stopped the boats” breaking his three word slogan rule and expanding to a five word pronouncement.

Scott Morrison had declared the theme of ‘Restoring Hope’ was a fitting occasion on which to celebrate Australia’s generous humanitarian program:

“This government's successful border protection policies that are stopping the boats and preventing deaths at sea is resulting in a human dividend with a further 20 000 Special Humanitarian Programme places being made available, out to 2017-18.”

But these are places for the good refugees; the ones that wait patiently.

Unlike Sri Lankan refugee Leo Seemanpillai, whose 20 years of waiting in an Indian refugee camp was not deemed long enough.

The following are some of the events, leading up to, and distinguishing this year’s, restoring hope themed, refugee week:

1. We have had the funeral of refugee Leo Seemanpillai, whose self-immolation should have drawn horrified recriminatory attention from all the mainstream newspapers. Instead it has mostly been presented as a sad story rather than the human rights outrage it truly is. Leo ‒ on a bridging VISA ‒ was tormented by fears and threats of being deported to Sri Lanka. These threats were not imaginary but part of declared policy.

2. Massive insult to injury was added by the Government’s refusal to allow a single member of Leo   Seemanpillai’s immediate family to attend their son and brother’s funeral.

It was reported that Leo’s brother ‒ despite having a passport ‒ was refused a visa. Because he was unemployed, he was deemed a risk of wanting to remain in Australia.

A letter, from The Australian High Commission in Chennai, informed Leo’s brother:

‘You are unemployed, you have no savings, no assets, and you are unskilled; as such, you are in a state of financial disadvantage.’

‘You have stated that your purpose in visiting Australia is to attend your brother’s funeral. I do not doubt the sincerity of your desire to pay your last respects to your late brother, however I consider that the assessment above that you do not genuinely intend temporary stay in Australia outweighs his consideration.’

3. But in better news, the High Court has ruled that another of Morrison’s mean tricks ‒ the cap on protection visas ‒ is invalid. The restriction on granting permanent protection, to those arriving by boat has been struck down as not complying with Australian law.

4. More grim, however, was the High Court pronouncing the off shore detention at Manus Constitutional and therefore legal, despite its flagrant disregard for the the 1951 UN Refugee Convention. This means Abbott can now proclaim the Constitutional ‘legality’ of the Manus deterrence hellhole.

5. Despite a bloody civil war in progress and Australia sending troops to protect our embassy, Scott Morrison has refused to rule out returning Iraqi refugees to their homeland, stating they had agreed to return ‘voluntarily.’

Sounds more like an offer they couldn’t refuse and, in fact, it is a mafia style offer.

Fairfax reports that Iraqi asylum seekers are being offered up to $10,000 to ‘accept’ a return trip from the Manus or Nauru hell into the hell of an escalating war zone. Tony Abbott has declared the situation in Iraq to be a humanitarian and security risk, stating that the insurrection has inflicted ''…maximum violence and terror” on Iraqis and treated surrendering soldiers and police with ''extraordinary brutality''.

Foreign Minister Julie Bishop, meanwhile, is urging Australians to leave Iraq as soon as they can?

Yet it is seemingly quite all right to send Iraqi’s back to this unsafe environment?

This highlights the insanity of the political stance regarding boat people embraced by both sides of politics.

The Howard Government welcomed the clarion call to war with Afghanistan in 2001 and Iraq in 2003, presumably to free the oppressed. But now we don’t want any of them crossing our sovereign borders, do we? When these victims of oppression and war actually arrive on our shores, there is no welcoming embrace. Instead asylum seekers have been imprisoned and reviled [incorrectly] as ‘illegals’, coming in through the ‘back door’.

6. And the ultimate piece of non-resistance is the Labor caucus has affirmed its support for offshore processing though with less cruelty. In other words, the punishment that involves isolated and traumatic conditions, indefinite detention, slow, nonexistent, or unjust processing [depending on whim] … should be softened, just a tad.

Slapping the current government with a feather, the ALP caucus has declared.

‘The Abbott government should ensure that detention facilities provide safe, dignified and humane conditions for asylum seekers in accordance with obligations under the refugee convention and in accordancewith relevant human rights standards.’

World refugee numbers, including internally displaced persons, have hit the highest number since World War II — over 50 million, half of whom are children. Yet Australia is pushing all boat arrivals back, often into zones overwhelmed by refugee flows, especially in the Middle East.

Meanwhile, Italy’s mission ‘Mare Nostrum’ (Latin for ‘Our Sea’) has intentionally rescued over 50,000 refugees and sees this as a European responsibility. It is pushing for a regional rescue response.

The ALP shadow minister for immigration and border protection, Richard Marles, has sought to contort his stance on refugees. He has ludicrously tried to conflate the notions of compassion and avoidance of deaths at sea with the heinously conceived deterrence policy.

Let’s be clear: cruelty to stop cruelty is an oxymoron.

But offshore processing is the ALP’s in vitro fertilized child of the infamous John Howard Pacific Solution. Both main parties have overlooked the scathing criticism in a report by Amnesty that states that Manus Island refugee detention facility breaches fundamental human rights. The report, titled ‘Still Breaking People’, states that nothing has been done to address its concerns in a previous report called ‘Breaking People’.

With the record of homicide, violence, mental illness and suicide resulting from Australia’s cruel punishment of refugees, the epithet of hypocritical seems far too mild to apply to this policy.

The refugee week theme of ‘restoration of hope’ is as bizarre as the claims being made about Operation Sovereign Borders being a life saving, compassionate, deterrence policy.

The testimony we should heed about the impact of this foul policy is that of asylum seekers, such as this from a Young Kurdish Iraqi couple:

‘We arrived in Australia but have found only a life like what we had. Our opportunity, our hopes, our goals we were looking for seem to be gone, to be dead. All hope is dead in our heart. Why have we been bought to Manus Island? It feels like we are at the end of the world. We are thinking this is not life, death is better than existing like this.’

Or this, by an Iranian woman:

‘This experience was more traumatic for us than the boat trip we undertook to reach Australia. Then, our life was in the hands of nature. But here in Australia, where we expected just treatment, our lives were in the hands of people who made a choice to treat us in this cruel and demeaning way. This is very hard for us to understand. I was thinking all the time I didn't want to bring my daughter to this. This is why I left Iran.'

So that they can declare: 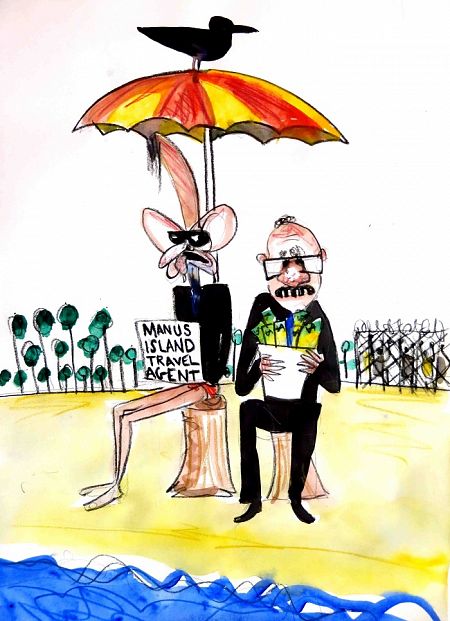 John Graham originals, including the one above, may be purchased from IA's online store. (See more of John's political art on his Cartoons and Caricatures Facebook page.)