SUBSCRIBE   DONATE LOGIN SHOP
SUBSCRIBE   DONATE
How we prevented a Morrison dictatorship
How Howard screwed the Libs
U.S. site tries to ruin what makes fairy bread great
Bloody Idiot of the Week — Episode 28: Get used to it
Morrison's 'politics of retribution'
Republic Opinion

Queensland — it's time to stop swearing at the Queen

With the swathe of recent elections, perhaps it's time to reconsider the absurd nature of the Oaths of Allegiance members of parliament must make before they can take their seats, writes history editor Dr Glenn Davies.

QUEENSLAND’S STATE ELECTION last weekend delivered a win for the now three-peat Palaszczuk Government. Queensland Premier Annastacia Palaszczuk and her State Labor Government follow in the footsteps of wins by Jacinda Ardern in New Zealand, Michael Gunner in the Northern Territory and Andrew Barr in the A.C.T. The new beginnings for all these progressive governments raise the question of who they should swear their allegiance to — the people they were elected to serve, or a foreign Queen who lives 17,000 kilometres away.

One of the first things the newly elected MPs in each of these jurisdictions is required to do is make an Oath of Allegiance. Most Queenslanders would be shocked and disappointed to learn the political candidates elected last weekend are not required to pledge any allegiance to them or the state of Queensland. Instead they promise and swear to serve the people of Queensland but not “be faithful and bear true allegiance”.

With a new parliament about to be established in Queensland, the issue of the Oath of Allegiance needs to be considered. Surely it’s time to ask the Queensland Parliament to amend the Constitution of Queensland Act 2001 and replace references to allegiance to the British monarch with the people of Queensland.

The Constitution of Queensland 2001, Schedule 1: Oaths and affirmations states:

I, ..(name).., do sincerely promise and swear (or, for an affirmation — do sincerely promise and affirm) that I will be faithful and bear true Allegiance to Her (or His) Majesty..(name of Sovereign).. as lawful Sovereign of Australia and to Her (or His) heirs and successors, according to law; and I will well and truly serve the people of Queensland and faithfully perform the duties and responsibilities of a member of the Legislative Assembly to the best of my ability and according to law.

So help me God! (or omitted for an affirmation).

The absurd nature of the Oath of Allegiance Queensland MPs must take before they can take their seats in the Queensland Parliament is reflected in swearing an oath to the British monarch, who has nothing to do with their being elected to Parliament and does not pay for them to be there. It’s the citizens of this state that elect State MPs to represent us and our Oath of Allegiance should reflect that.

Disappointingly, Queensland has reviewed this question before. It’s time now to change the oath to reflect contemporary Queensland and Australia.

A few years ago, the High Court ruled that a number of federal members in the 45th Federal Parliament who held dual citizenship must be removed from their parliamentary positions. The crisis saw 12 MPs lose their seats because of fears they were dual British citizens and were therefore ineligible for parliame­nt under Section 44 of the Australian Constitution.

Surely this is the elephant in the room. How is it possible for the High Court to disqualify members of parliament on the basis of Section 44 of the Australian Constitution as being (unknowingly) citizens and therefore subjects of a foreign power when these same MPs and ministers swear allegiance to the monarch of this same foreign power (and her descendants), who happens to be our Head of State?

There can be no doubt that the “Queen of Australia” is a British woman, yet we, here in the Antipodes, quibble about people we have elected to our Federal Parliament whose dad or mum was of British ancestry. 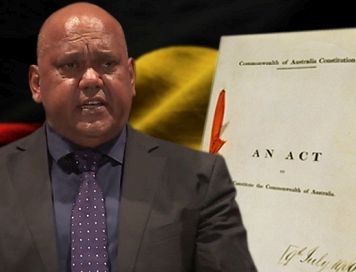 It’s worth remembering that on 3 December 2007, one week after the election of the new Rudd Federal Labor Government, a “very republican moment” occurred when Kevin Rudd and his ministry swore an oath to “the Commonwealth of Australia, its land and its people”.

The significance of this moment was the new federal ministers swore an oath under Section 62 of the Australian Constitution to the people of Australia rather to Queen Elizabeth II, a foreign monarch.

When Kevin Rudd was sworn in as the 26th Prime Minister of Australia, wearing R.M. Williams boots and a grin as wide as the verandah of his suburban Brisbane Queenslander, he declared:

“I, Kevin Michael Rudd, do swear that I will well and truly serve the Commonwealth of Australia, her land and her people, in the office of the Prime Minister, so help me God.”

Taking the office of Prime Minister (Executive Councilor) involves swearing an Oath of Allegiance or Affirmation. However, under Section 62 of the Constitution, the form of the Oath of Office is not prescribed for a minister, but by the Governor-General on the advice of the Prime Minister.

Of course, the new oath was given to the Governor-General on Rudd’s advice, yet he could not have technically given that advice until he became an Executive Councilor. No doubt, this advice was relayed earlier, perhaps through or with the approval of the caretaker, John Howard. In taking this oath, Rudd acknowledged the republican ideal that ultimate political authority lays with “the land and the people” of Australia rather than with the British monarch.

The Rudd Oath should not be confused with the Oath of Allegiance or Affirmation under Section 42 of the Constitution required to be made by a member of parliament or senator before taking his or her seat.

Section 42 involves swearing or affirming to:

‘...be faithful and bear true allegiance to Her Majesty Queen Elizabeth the Second, Her heirs and successors according to law.’

This oath was also used for ministers until the Keating Labor Government removed reference to the Sovereign. However, with the election of the Howard Liberal Government in 1996, the Oath to the Queen was restored but without any reference to ‘Her heirs and successors’.

One of the essential definitions of a republic is a state based upon popular sovereignty, in which all public offices are held by persons deriving their authority from the people, either through election by the people, or appointment by officers themselves elected by the people. The exclusion of the reference to the Queen in the Federal Ministerial Oath is a tangible step towards repositioning political authority for a republican Australia. Symbols are important and the words in this oath reflect more meaningfully the reality that our ministers serve the people of Australia and not a foreign monarch.

The “currency lads” of mid-19th Century Australia would often use the toast: “To the land, boys.”

In 2014, seven out of ten Australians supported pledging allegiance to Australia and its people rather than to the Queen.

Amending the Queensland Oath of Allegiance for members of the Legislative Assembly is symbolic. However, it would convey an important message of their duty to the Queensland people from their first day as parliamentarians, not just their promise to do as good a job as they can.

Our nation’s values are democratic. To have an institution sitting above our state and federal parliaments, filled with a foreign family born to rule, is out of date with our identity as an independent federation. It’s about time all Oaths of Allegiance in Australia were changed to reflect this.

It’s as simple as that.