Senior correspondent Barry Everingham has discovered another low-rent monarchist blog — Australian Republic Unplugged, which leads to a discussion of British plans to change the laws of royal succession. 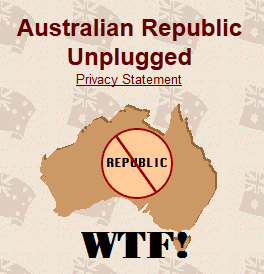 “…our collective Australian Governments are doing very little, if anything, about the Diamond Jubilee of of Her Majesty Queen Elizabeth 11, Queen of Australia.”

Well, good on the collective.

For starters, just WHAT has ERII done for us?

Does she promote trade with Australia?

Does she live here?

Is she even an Australian?

Would she know the words of Advance Australia Fair?

One of Unplugged’s ideas is that a small amount of taxpayers’ money should be spent on the refurbishing of the commemorative wall located at Fleet Steps, which marks the arrival of the Queen in 1954 on her first visit here.

Excuse me, when governments are involved, “small amounts of taxpayers’ money” is an oxymoron.

Why would we want to remember that it was she who was the first in that long line of foreign monarchs to reign over us who had ever bothered to make the journey here to our shores — that’s what “our” monarchs thought of us.

The blog says sixty years of exposure to the elements has taken its toll on the commemorative wall — but doesn’t mention the Queen has somewhat changed in those years as well and we really should use the anniversary of her first visit to ensure it is her last — and while we are there, make sure her son Charles and his son William are not foisted on us as absent heads of state.

Unplugged should be concentrating on the news from London that David Cameron has decided to attempt to drag the monarchy screaming into the 21st Century by changing  the archaic law forbidding first  born women ascending the throne if they have younger brothers.

This is of course a sop to William and Kate.

As things stand, if their first baby is a girl and she is followed by a boy, he will inherit the throne, not the little princess.

And, while he is at it, Cameron wants to trash the insulting and ridiculous law forbidding Catholics or those married to them from being in the Line of Succession.

And furthermore, as things stand, a child born out of wedlock can’t ascend either.

All this would be bad enough if the laws were in any way modern — they were drawn up in 1701, 87 years before the English invaded Australia and dispossessed the Aboriginals. And they are still on the statute books.

But there is a sting in the tail here.

For those laws to be changed, Cameron has to convince the parliaments of the 16 colonies who have inherited the Queen as head of state – including Australia, New Zealand and Canada – to change their similar laws — and he’ll be raising the issue at CHOGM in Perth in a few weeks.

Why bother at all to make the changes Cameron is seeking?

Just tear up the laws – they mean nothing – and let us get on with our lives.