A day in the life of a proud 100 per cent true-blue Australian, by George Said. To his horror, he might be more multicultural than he thinks.

Pursuing his national identity, our Aussie vigorously lives his way of life. Pride in all things Australian may be a barrier from seeing what has happened. 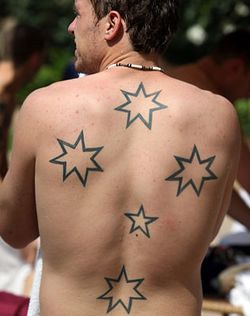 Dawn finds our unsuspecting patriot garbed in pyjamas, a garment of East Indian origin; and laying in bed, built on a pattern which originated in either Persia or Asia Minor. He is muffled to the ears in un-Australian materials: cotton, first domesticated in India; linen, domesticated in the Near East; wool from an animal native to Asia Minor; or silk whose uses were first discovered by the Chinese.

All these substances have been transformed into cloth, by methods invented in South Western Asia. If the weather is cold enough he may even be sleeping under an eiderdown quilt known as a doona, invented in Scandinavia.

On awakening he glances at a clock, a medieval European invention uses one potent Latin word in abbreviated form, rises in haste, and proceeds to the bathroom. The insidious foreign influence pursues him even there. Glass was not invented in Queensland but by the ancient Egyptians and porcelain in China; the art of enamelling on metal by the Mediterranean artisans of the Bronze Age. Even his bathtub and toilet are but slightly modified copies of Roman originals. The recent contribution by the Americans is the steam radiator, against which our patriot, the true blue Aussie, very briefly and unintentionally, places his posterior (this means your bum).

In this bathroom, our pure Australian patriot washes with soap, invented by the ancient Gauls. Next, he brushes his teeth, a subversive practice which did not invade Australia until the latter part of the eighteenth century by the whites. He then shaves, a masochistic rite first developed by the heathen priests of ancient Egypt. The process is made less painful by the fact that the razor is made of steel, an iron alloy discovered in either India or Turkestan.

Lastly he dries himself on a Turkish towel.

Returning to the bedroom, our unconscious Aussie, victim of foreign practices, removes his clothes from a chair, invented in the Near East, and proceeds to dress. He puts on his tailored garments, whose form derives from the skin clothing of the ancient nomads of the Asiatic steppes. He puts on his feet stiff coverings made from hide, prepared by a process invented in Ancient Egypt and cut to a pattern that can be traced back to Ancient Greece. He makes sure that they are properly polished, also a Greek idea. Lastly, he glances at his mirror, an old ‘Dago’ invention and goes out for his breakfast.

Here a whole new series of foreign things confront him. His food and drink are placed before him in pottery vessels, the popular name of which ‘china’ is sufficient evidence of their origin. His fork is a medieval Italian invention and his spoon a copy of a Roman original.

He usually begins his meal with coffee, an Abyssinian plant first discovered by the Arabs. He is quite likely to need it to dispel the morning-after effects of overindulgence in fermented drinks, invented in the Near East. Whereas the Arabs took their coffee straight, he will probably sweeten it with sugar, discovered in India and not in Queensland. He may even dilute it with cream from a cow originally domesticated in Asia Minor.

If our Aussie patriot is old fashioned enough to adhere to the so-called traditional breakfast, his coffee will be accompanied by the juice of some fruit, domesticated in Wog country. He will follow this with a bowl of cereal, made from grain domesticated in the Near East and prepared by methods also invented there. More likely, he will have the eggs of a bird, domesticated in the same region together with strips of pork flesh, which has been salted and smoked by a process invented by the Balts.

Breakfast over, if it looks like rain, takes an umbrella, invented in India. He then sprints for his car. After reaching a news stand, he buys a newspaper. He pays for it with coins, invented in ancient Lydia. Once settled in his car, he reads the news of the day, imprinted in characters invented by the ancient Semites, by a process invented in Germany, upon a material invented in China. As he scans the latest editorial, pointing out the dire results of multiculturalism in Australian life, he will thank a Hebrew God, in an Indo-European language, that he, at least, is a 100% dinkum True Blue Aussie.
AUSTRALIA NEW AUSTRALIANS DISCRIMINATION Australia discrimination diversity nationalism patriotism racism
Recent articles by admin