A terminally ill woman is gaoled for unpaid fines of $3,622 and, rather than receiving urgent medical care, is treated with derision and contempt before dying. Natalie Cromb reports on the ongoing coronial inquest into Ms Dhu's death.

A terminally ill woman is gaoled for unpaid fines of less than $5,000 and while under the "care" of police officers – those who serve and protect – she seeks medical assistance for her condition. Rather than receiving medical care, she is judged, belittled and ridiculed. She is treated with contempt and not consulted on her condition. She is seen to be manifesting her symptoms and likely to be coming down from drugs.

How can this happen?

This woman is Aboriginal.

We are two days into the coronial inquest into the death of Ms Dhu — a 22 year old Indigenous woman who was incarcerated at South Hedland Police Station while serving time for unpaid fines. Unpaid fines of $3,622 cost Ms Dhu her life. 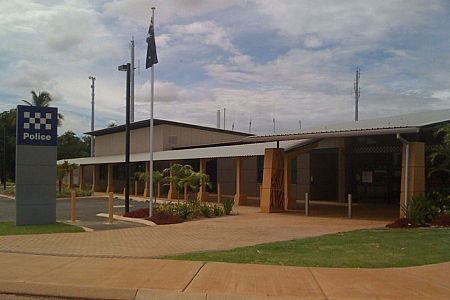 On day one of the inquest, we learn that, in summary, in 2014 an Aboriginal woman from the Pilbara Region in Western Australia was serving a custodial sentence for unpaid fines totaling $3,622. While serving the sentence, the woman speaks to police and expresses that she is very unwell, in extreme pain and is experiencing loss of sensation in her extremities and seeks medical attention. The police take her to the clinic, where the doctors make superficial diagnoses of “behavioural issues” following consultations with the police, who expressed equivocally that the woman was “faking it”.

The woman rapidly deteriorates and continues to request medical assistance and immediately preceding her third visit to the clinic is seen on CCTV footage to have vomited violently followed by collapsing to the ground and hitting her head. Notwithstanding the notes of the supervising officer, that opined that the woman’s condition was not urgent, she was taken to the clinic a third time.

On this occasion, the officers – quite helpfully – escorted her from her cell, where she was found to be barely conscious, by dragging her along the corridor outside the cell and loading her into the back of the vehicle by her arms and legs and, when she moaned in pain, an officer says to the dying woman:

On the third visit to the clinic, after the officers once again reiterated to the nurses that the woman was “faking it,” the woman tragically died after going into cardiac arrest.

It reads like a hugely exaggerated example of racism and ineptitude, but this happened. In 2014. In Australia.

#JusticeforMsDhu The tragic case of Ms Dhu and the failure of a state https://t.co/4sHLZix98s pic.twitter.com/69nfQcjQNW

Day two of the inquest revealed that the autopsy confirmed death by pneumonia, septicaemia and complications from a previous rib fracture that are a result of an incident of domestic violence.

Ms Dhu’s partner gave evidence via videolink and confirmed that he, too, was in custody at the same time as Ms Dhu and he heard her crying and moaning in pain.

He testified that he asked the police officers to take Ms Dhu to the hospital on several occasions, but they told him she had mental health issues and was

He recalls that, on the day of her death, Ms Dhu was violently ill and choking on her own vomit and struggling to breathe. He confirmed that four officers entered her cell and were laughing at her and then he heard a loud thump and Ms Dhu’s cries for help ended abruptly.

He testified that Ms Dhu was dragged from her cell along the ground by her hands and, at this point, her body was lifeless.

This inquest, believe it or not, was hard fought for by Ms Dhu’s family because they so desperately want answers to why their beloved daughter, sister, cousin died when she was in a place she ought to have been safe.

The fact is, however, that Indigenous people are not safe in the vicinity of police and certainly not in the custody of police. History tells us that police can cause the death of an Indigenous person and still not be charged with the criminal offence of having done so; in fact, the police officers will be free to continue "serving and protecting".

Ms Dhu’s case is, devastatingly, not unique. There have been large numbers of Indigenous deaths in custody over the last 20 years and this number is rising.

As the details of Ms Dhu’s case come to light fully throughout the remaining eight days of the inquest, you will hear many people wondering how this can happen in 2015. How it is possible for them not to know how sick she was and how someone could be gaoled for something as small as unpaid fines.

The land forged on the blood and devastation of Indigenous Australia. The country that enunciates values of a "fair go", but only if you are white and – preferably – male. The land where the past should be left in the past and there is zero tolerance for anyone speaking the truth of historical racism — and especially not of contemporary racism, because white people do not deserve to feel guilt for reaping the rewards of their ancestors’ genocidal actions.

We live in a nation where the likes of the Reclaim Australia white supremacists are considered to be exercising free speech, rather than having them appropriately reprimanded for hate speech and incitement. We live in a nation where, as soon as an atrocity is committed by terrorists internationally, we will give air time to Pauline Hanson, who is somehow our national expert on all things terrorism.

We live in a nation where abuses of human rights are ignored and, if the Human Rights Commissioner dares raise the point, the leaders will call for her head.

We live in the nation that has right wing middle Australia decrying the lack of police powers, despite a mountain of evidence pointing to a considerable portion of officers abusing what powers they do have.

The crux of the matter is that the institutions within Australia and the people that administer them do so with contempt towards Indigenous Australians. The system is not applied equally, it is targeted and demonstrably racist.

While this is the case, Indigenous Australia will continue to be suspicious of the police.

If racism isn’t called out and the institutions perpetrating racism aren’t called to account, we will continue to see our brothers and sisters die in preventable circumstances (read: die at the hands of the oppressors).

Great piece by @amymcquire which angers in its raw truth: https://t.co/pDWehXXbgl