How about OUR Republic?

By Klaas Woldring | 12 July 2011, 8:00am | comments |
Dr Klaas Woldring says: “Why should Australians have to wait to develop a Republican Constitution until Queen Elizabeth II either abdicates or passes away?” 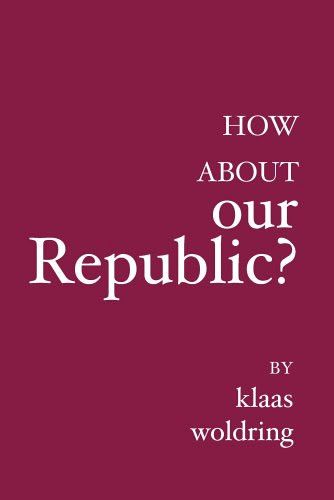 Is it the fear of an elected Government having to deal with a directly elected President? There is no doubt that in a multi-purpose plebiscite, which includes the option of a popularly elected President with symbolic powers, the latter would be supported by a large majority of Australians. Recent opinion polls certainly indicate by over 80 per cent.

Why then, are citizens not asked such questions now? Most Australians who would support such a Republic are not anti-monarchists. The constitutional monarchies in Europe – such as the U. K., Norway, Sweden, Denmark, the Netherlands, Belgium and Spain – enjoy considerable popular support in most cases. They have grown historically and, as they are constitutional, these Monarchies do not have a great deal of political power at all. But they do have symbolic power. One could argue that they have become more or less like permanent symbolic Presidencies of a Republic.

However, the Royals of European democracies are living among their citizens, are in close contact with them, and are seen regularly at major public events and functions. That is not the case at all in Australia. The House of Windsor is now very remote from Australian society and the Australian Government's decision-making structures and processes. This is a huge and real difference and, therefore, a Republic IS the logical form of state for Australia. It is not only high time to sever the umbilical cord but, even more, for Australia to actually assert its independence regionally and internationally. Nevertheless, the most important question is "What kind of Republic?" should Australians aim for? Sure, that is a longer term issue but we should make a list of items for discussion now, a strategic plan.

The people should start discussing THEIR Republic and THEIR Constitution. For that to happen they need some relevant information—which they are now simply not being provided with. That may require a bit of light reading to find out how other Republics came into being, how they elect their Presidents, what kind of structure their states have and why? Also how their electoral regimes operate, and how their governments are formed. We would want to look at several European constitutional monarchies to see what governance systems they have in place that Australia could learn from.

Australia needs a strategic plan to improve their systems of governance, across the board. The major parties do not have any such plan. Moreover, the recent federal election that resulted in a hung Parliament after a long campaign was widely condemned by disappointed voters. This surely demonstrated that huge improvements really are needed. We need greater diversity in our Parliaments rather than the stability of mediocrity or worse! How can the Constitution be more readily and easily amended? Why do the people have no power to initiate referendums?  Why not rewrite the entire Constitution in one go after a series of plebiscites?

[Klaas Woldring is a former Associate Professor of Management and Politics, Southern Cross University. His book  ‘How about Our Republic’ is available in Australia from BookPod On-Line. Email: mailto:sales@bookpod.com.au. Mob: 419 683 213]