Getting the balance right in royal reporting

Does the media run a risk of alienating Australian media consumers by over-reporting royal events in Britain? David Donovan comments.

AUSTRALIAN commercial media has a vested interest in royal weddings, let's make this plain. They see it as an opportunity to sell copies, advertising, souvenir editions and commemorative tea-towels, mugs and tea-spoons. They very much want Australians to follow them in their delight about next-years Christmas in August.

Republicans think most people – a clear majority – in Australia have moved on from the 1950s and that the correct line for us to take is to be respectful and honest — not disingenuously claim we are overcome with excitement about the event. Of course, it makes sense for republicans to use the media attention to present the case for a republic and point out how remote the events are to Australia.

In the current instance,  the events involve two English persons who not only have no constitutional role in Australia, but who are quite likely to never have one, since William may never inherit the Australian throne.

This is exactly the line the ARM took yesterday in its statement, and by the sound of the vox pops and polls, most Australians regard the news of the engagement of two people who had been going out together for 10 years as rather an anti-climax. In fact, there was a sense of mystification in the public that shows were cancelled and bulletins were held over to breathlessly report this news as if it wasn't something that hadn't been on the cards for several years.

The New Zealand Republican Movement even prepared a video to catalogue the bemused and laconic reaction from New Zealanders: http://www.youtube.com/watch?v=h7fteKMTQlA .

The Republican Movement received a curious warning in the form of an editorial in The Australian last night that informed republicans that they had better follow the party line and and "rejoice" with The Australian about the royal engagement or face the consequences.


"General Keating claimed the engagement is "pretty irrelevant to Australia" because "it's quintessentially an English moment". His argument might resonate in Newtown, New Farm and Richmond, but it will be poorly received in the outer suburbs and provincial centres where middle Australia will follow the details of the engagement in print and online, just as it sent newspaper circulations to stellar heights after the death of Diana on August 31, 1997."

The editorial proceeded to accuse the Republican Movement of being anti-British.

Firstly, we accept that we should be respectful and congratulate the royals. We have done this in all our public statements. We have, in fact, no gripe at all with the royals, and the ARM is – believe it or not, very pro-British – and very much into celebrating our British heritage and institutions. Personally, my grandmother was English and I lived in England for 6 years. You only need to look at our policy to see that we applaud Britain and what it has contributed to Australia:


An Australian republic will embrace our egalitarianism and the concept of a fair go. It will acknowledge our Aboriginal and Torres Strait Islander heritage and respect its culture, with its timeless connection to the Australian land and sea. It will recognise and build upon our British heritage and acknowledge its gifts, including our political and legal institutions. An Australian republic will celebrate our immigrant heritage of opportunity and endeavour and its contribution to our national identity. It will unite all Australians behind an Australian Head of State.

Secondly, we don't accept that there is a class divide in egalitarian Australia between inner and outer suburbs about support for the monarchy; we think this attitude is rather disrespectful towards the Australian people. The Republican Movement is not elitist in any sense. This is shown in a membership base that covers every part of Australia and contains every sort of Australian.

Newspaper circulation is mentioned prominently in the quote and thus the primary concern of The Australian – a commercial media entity – to make money is evident. (There is nothing wrong with that, of course.) Unfortunately for The Australian, it seems to have an outdated presumption about the public mood that is not supported by its own polling. An online poll of 1,200 people in The Australian yesterday showed that 50% of people supported a republic with over 40.67% republicans no matter what the royals get up to. On the other hand, only 29.92% support the monarchy come hell or high water. There's 9.33% that don't care either way, but the interesting figure was the number of people turned and off by the event. Only 10.75% were more favourable towards the monarchy as a result of the over-the-top press coverage, however 9.33% of people were actually turned off the monarchy by the so-called "hype" about of the event.

In other words, the meagre minority of people interested in the royal engagement was about the same those turned off the by saturation reporting of this event by newspapers like The Australian

Perhaps instead of criticizing the Republican Movement, The Australian might instead prudently consider its own interests and how they are affected by the balance in its reporting. As newspaper circulations drop away alarmingly with the advent of competing sources of news and information, all newspapers that do not give people the news that appeals to them run the real risk of losing segments of their readership.

In the case of the royal wedding, at least 50% of the Australian public will be turned off if media entities injudiciously force-feed Australians a bland diet of unimportant British royal-watching that is, let's face it, far better found in Womans Day than in credible broadsheets that purport to report the real news that truly effects Australians. Bear in mind that Ireland is in the midst of a sovereign debt crisis that may have massive implications for the world economy and thereby the livelihoods of Australians.

It seems that not only are people disappointed by the overemphasis the media has given this event in Australia, but are also becoming disappointed in Britain, where the reporting has reached saturation levels.

The following was an email received from a British lady, who applauded the line the ARM took yesterday:


These sentiments are not only felt in Australia, but they are the sentiments of a great proportion of the British public too. We simply have no say in the election of our Head of State, instead we are stuck with this never ending, on going, dysfunctional family. The British public will be very interested to know who will be funding this lavish affair, when our country is in the worst economic crisis ever seen for decades.

This is an engagement between two people, one of whom emanates from the most dysfunctional wealthiest family in Britain, and a girl who left university eight years ago and has not held a job down since, apart from 'helping the family business' so we are told. Instead she has been hanging around waiting to be asked !! After all her parents sent her to the university in Scotland, hoping that she would end up with a royal!! (well documented)

It is widely suspected that they will spend part of their honeymoon in Australia, in the hope of reviving the Monarchy. If you recall, the Queen arranged for William to visit in January of this year, in the hope that he would rekindle the Monarchist cause.

There is a fast growing dissatisfaction with the Monarchy and the hereditary line, but I really can't understand how an Australian can be part of this.

There is no doubt that the media should properly report this event involving a major worldwide celebrity, since it seems important to many people all around the world, even republican United States. 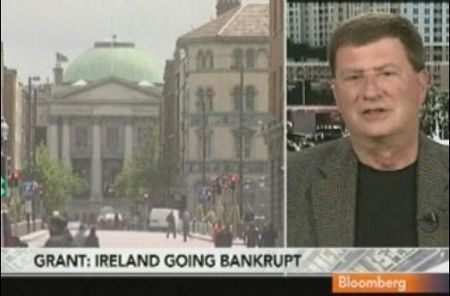 However, it does not deserve to be reported more importantly that the disturbing developments with Ireland and its sovereign debt crisis, something that runs the risk of spiralling Europe and the world into a double-dip recession. These are the events in Europe that will truly affect Australian people and families in the future — their livelihoods, jobs, mortgages and houses. Surely this is far more important than the pomp and circumstance of a British royal wedding involving two people with little genuine connection to Australia.