Peter Dutton is terrorising, and plans to send to almost certain death, a critically ill 72 year-old who has lived in Australia for 32 years and is beloved by his remote North Queensland community. Sarah Smith reports.

At 72 years old, his health has deteriorated rapidly within the confines of Brisbane International Transit Accommodation (BITA). Upon his arrest on 3 May 2017, in Cairns by nine Australian Border Force stormtroopers dressed in black tactical gear and carrying guns, it took five days and a respiratory specialist to stabilise him enough to be fit to fly. He was accompanied on the flight to Brisbane by a nurse, and an oxygen tank.

Now he's in immigration detention and has been told that his deportation to the United States is imminent.

This is problematic on many fronts. To begin with, he's in advanced stages of lung disease and cannot walk more than 100 metres without the aid of Ventolin. He becomes short of breath after only five steps.

The stress of being detained and the conditions in detention have left him extremely unwell, and he has developed a potentially fatal chest infection.

On 16 June 2017, he was hospitalised, unable to breathe or walk, after twice being denied a doctor's appointment within BITA. His daughter and granddaughter have made a mercy dash from Port Douglas to be by his bedside, but even this has failed to improve his condition. The recycled air within BITA is exacerbating his condition and, upon his return from hospital, he will continue to worsen. He also is exhibiting symptoms of Complex Post Traumatic Stress Disorder and has been denied access to a psychiatrist in hospital. Two guards, armed and in black tactical gear, sit at his door at all times.

His doctor states that he is unlikely to survive a flight to the United States, even with a medical team accompanying him.

The life expectancy of someone with this level of Chronic Obstructive Pulmonary Disease is less than eight-and-a-half years. His condition means that a long-haul flight could result in his death up to two months after landing.

Patton's daughter, Maya, is on a bridging visa after having her citizenship abruptly cancelled by the Department of Immigration and Border Protection.

An elderly Far North Queensland man has been arrested decades after arriving on a fake passport. #7News pic.twitter.com/TNwhMrnc0y

All of this is due to the fact that, in 2012, Patton was convicted of arriving in Australia in 1984 using falsified documents. He served six months of a two year sentence, and was released onto a parent visa (subclass 103), sponsored by Maya, now a successful business owner with 18 employees.

Patton Eidson, a former member of the U.S. Coast Guard, came to Australia because he was in fear for his family's safety; he was a witness to events that led to one of his golfing associates being charged with importing marijuana. Never at any point was Mr Eidson himself charged with any crime in the United States.

Maya was a minor at the time she arrived with her parents in Australia, but was stripped of her citizenship recently for not reporting their arrival on falsified documents when she turned 18.

This means Maya cannot leave Australia, where she has a family business and has lived for 32 years, because she won't be allowed to re-enter the country.
If her father is deported, she will never see him again. Mere months after losing her mother to cancer, this is an impossible prospect for her to live with. Her voice cracks as she tells me of the impossible choice she has to make — between her business and family in Australia, and her last remaining parent.

"If Dad is deported, I would have to go to care for him in the States; he will have no  insurance, so who will care for him there? So if Dad goes, my daughter will lose not only her mum and her granddad, but her business as well – it takes both of us to run it – which will put 18 Australians out of work."

The pain in her voice is unmistakable as she talks about the dire health issues faced by her father:

"I can't talk about his life expectancy. I only just lost my mum and that thought will just make the tears start flowing, I am fighting them back as it is."

Mackay woman fighting to remain a citizen after coming to Australia with fugitive parents as a teenager https://t.co/wQLkdND4Fu

"My daughter is an only child and so is my granddaughter. Neither is married and all we have is each other. Due to my daughter's revocation of her citizenship she is considered a non-citizen. She can remain in Australia, but if she ever leaves she cannot return. So she would never be able to come visit me as she could not return to her own family. The family would be torn apart forever."

Conservative Federal MPs Bob Katter, George Christensen and Warren Entsch have all pledged their support to Mr Eidson, due to his contribution to the community over the 31 years he's lived there.

Bob Katter said he was disgusted by the treatment of Patton Eidson.

"This poor 73-year-old [sic] bloke who's just lost his wife and was responsible for some alleged misdemeanour nearly half-a-century ago to be detained by 15 police or government officers, it's sickening."

Mr Katter said it was a flagrant waste of taxpayers' money:

"If you're using government resources to terrorise a well-loved, popular, respectable citizen, you'd say it's a waste of resources. Would one say these resources could be better used? Well quite frankly, yes."

Christensen was similarly appalled, describing the situation as, "just sickening”.

While heartened by the support he has received, Mr Eidson is astounded by Minister for Border Protection and Immigration Peter Dutton's lack of receptiveness:

"The fact that so many members of my community and all over Australia, and three members of Parliament have asked the Minister to intervene and he totally disregards them is so depressing that it makes me want to give up hope for humanity."

The Julatten community in which Mr Eidson has lived for nearly 32 years has reacted to his detainment with shock and an outpouring of grief. This has prompted local community leaders to try to arrange counselling sessions at the Community Centre. So far, nobody in the tiny, isolated region is available to comfort distraught community members, many of them younger people who grew up seeing Mr Eidson as a surrogate grandfather.

Newly widowed and hundreds of kilometres away from his friends and family, Mr Eidson sits alone in hospital under the custody of Australian Border Force, his health rapidly declining and his sense of hope fading.

Without the intervention of the Minister for Immigration and Border Protection, Peter Dutton, this family, and an entire community, will be torn apart. 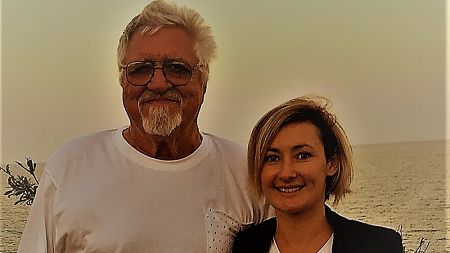