Banning the Chaser and bringing on a Republic 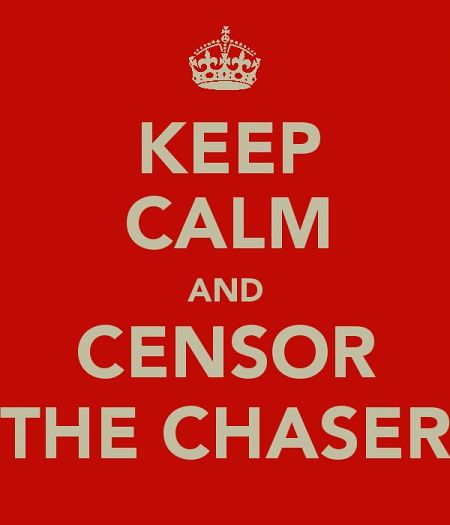 Just when you might have thought that things were looking a bit bleak for the Australian Republic, along comes the Chaser and heavy-handed royal censorship to remind us all why it's so vital we become a Republic. David Donovan comments.

The royals have been in PR overdrive mode since Prince William visited Australia in early 2010. It is blatantly apparent that they see Prince William as the fresh marketable face of the royals. This is because, apart from the Queen, there is pretty much no-one else suitable to sell. The Queen is, of course, venerable—but she's also 85 now and slowing down. Prince Harry, with his partying and love of Nazi fancy-dress, is probably out of the question. Prince Edward is just not attractive or saleable. Princess Anne apparently prefers to spend more time with horses than humans. Prince Andrew, who is a close friend of tyrants, criminals, abusers, and a recipient of Azerberjani largesse, is damaged goods. Prince Phillip, who is a gaffe-prone racist and even older than the Queen—ha! No chance. Or King Charles and Queen Camilla? The monarchists dread that day ever coming, though coming it rapidly is.

No, it is William and this wedding where the main game is and all the preceding PR is meant to remind us, through him, about how wonderful and "normal" the Windsors are. It is an obvious myth, of course, given the Saxe-Coburg-Gotha clan's obscene wealth, power and by the alarming fact that William is just about the only decent and respectable one in the entire brood. Nevertheless, it is this implausible message that the Palace's 130-odd strong PR team have been tasked with getting out into the public domain. It is also one that they had, in the main, been doing a reasonable job on...up until yesterday.

In Australia, indeed, they had been going swimmingly until they decided to remind us exactly what royalty is all about – power and privilege – through their heavy-handed censorship of the Chaser's royal wedding commentary, which was meant to be aired on ABC 2 and was expected to provide some small respite for republicans worn down by every free-to air channel showing the wedding in "we-love-royalty" full-on gush mode.

Now, if there's one thing Australians like, it's having a laugh. And laughing at pompous pretentious people who take themselves too seriously is an essential part of our national make-up. And if there's one thing we don't like, it's people trying to deny us the right to laugh at those people. In fact, being denied this right is almost unheard of in this country, so ingrained is it in our national psyche. So, to be denied this right by stuffy foreigners who presume to interfere in our domestic affairs...well naturally that's going to get our dander up.

The Palace are trying to deny that there is anything unusual about what has happened, that drama and satire are always off-limits for these sort of events. Bollocks.

If that was the case, then why is Barry Humphies happily broadcasting as Dame Edna or Channel 9? And why has Channel 10 got the irreverent 7PM Project? Even Channel 7 are planning a light-hearted coverage. No, the truth is, the Palace doesn't like the Chaser's style. They are worried they will be held up to public ridicule and this would damage their carefully constructed public relations facade. It is obvious that this is the case, or else they wouldn't have forced the BBC to revoke the ABC's original contract and made them issue a new more stringent contract, including conditions that prohibited the Chaser's involvement, just yesterday morning.


The Chasers' Chas Licciardello was interviewed by  Ali Moore on the ABC's Lateline last night. Here what he had to say about the issue:.


ALI MOORE: Do you think though that's something's changed? Because if you look at this statement from Clarence House that we've got tonight, it looks like someone stuffed up. I mean, the statement says that it's standard practice to have these clauses regarding these religious ceremonies, and then, "We've not imposed any new restrictions on the use of the Royal wedding service footage and we've not singled out the ABC." Now if that's the case, someone should have known this all along.

CHAS LICCIARDELLO: Well, look, I spent most of my law school years playing ping pong, so maybe I'm not the person to trust, but as far as I'm concerned, the BBC had very different terms to some of the other feeds, and some of the other feeds that we were examining did not have the "comedy restrictions" that they are speaking about a couple of days ago. Now all of a sudden, they seem to have those comedy restrictions.

ALI MOORE: So is there a new contract the ABC's had to sign?

CHAS LICCIARDELLO: Look, I don't know all the details of what the ABC's had to do. I'm not the ABC lawyer. But I do know the ABC today had to sign some kind of guarantee that weren't going to be on air, otherwise they were going to be in big trouble with mum and dad at the BBC.

ALI MOORE: How irreverent were you going to be? I mean, we are talking about the potential future head of state of this country.

CHAS LICCIARDELLO: Yeah, look, there is I think a misapprehension that we were going to do four hours of Princess Di jokes. But that really wasn't our intention because this is a goodwill event, this is an event everyone's looking forward to. It would be not only poor taste, but it'd just alienate our audience if we just went and just were nasty for four hours. And you know what? We've been there before and we know what that's like and we don't want to do it again.

Essentially what we were doing was we were making fun of the media circus, the whole system - it's a ridiculous system, the regal system. We were making fun of almost everyone except for William and Kate themselves because they seem like kind of nice, boring, normal people.

ALI MOORE: Doesn't it strike you as extraordinary though; I mean, the way that this reads, it would appear no-one can use this wedding for any purpose other than very serious reporting. I mean, it's very hard to believe that nowhere around the world is anyone going to use this footage for a little bit of comedy, a little bit of satire, poke a bit of fun at it.

CHAS LICCIARDELLO: Yeah, look, if I was Dame Edna and Ryan Fitzy - people like that on the other networks - I'd be insulted that they're not regarded as comedy, because I think they're funny. So I don't know what's going on.

(Note: Licciardello will be appearing on the ABC's special Q and A on the Republic tonight at 9:30 PM on ABC1)

One of the arguments for the royal family in Australia is that they are "invisible". The argument goes that because the royals are apparently powerless in Australia, there is no pressing urgency to get rid of them from our system. In other words, they are benign and so there is no need to excise them.

But, the truth is they are neither invisible nor benign. Royalty lives a cushy existence in palaces and off the public purse in Britain. They also realise that this comfortable house of cards could tumble were one of the other realms to become a Republic and give the British ideas. Australia is the most likely to fall, and so Prince William has been sent Australia twice in the last year, along with hordes of  British journalists. So much for being invisible. We should have had a hint that yesterday's events might occur, because on neither tour has any journalist been allowed to interview the Prince and attempt to probe behind his scrupulously constructed PR image. Who is he, really? We just can't be allowed to know.

This is also why Julia Gillard has been invited to the wedding, and not Tony Blair or Gordon Brown—Britain's last two Prime Ministers. Here, the Palace is exercising a bit of soft diplomacy — a grand event, a sumptuous reception, drinks with the rich and famous, a few gifts, an intimate dinner with the royal family, some flattery, some freebies — all are designed to court and seduce the Prime Minister and make her less likely to press the case for an Australian Republic.

So, we think the British royals are benign, but actually they meddle actively, but usually subtly, to stymie the public will to become a Republic.

But now the velvet glove has come off and been replaced by a heavy-handed attempt to blatantly interfere in Australian affairs and censor our free speech and media. It is something that should give all Australians pause for thought. The goodwill accrued from this wedding spectacle has surely been burnt away by this arrogant royal display.


The Palace want people to be swept up in the pomp, pageantry and personalities but forget the dirty secret of royalty—that it is built on a system of privilege that is inherently unfair, immoral and corrupt.

A writer for the German newspaper Spiegel had it right, when he said yesterday:


The whole thing feels like an aberration of history.  It's wrong if the head of state of a country can only come from one family. It's wrong to furnish this clan with palaces, land and all manner of grants to spare its members the indignity of having to earn their keep and enable them to live in luxury. It is wrong to address the Windsors and, from next Friday the delightful Kate Middleton as well, as Your Royal Highness or even Your Majesty. It is wrong to see them as anything other than people made of flesh and blood, like you and I.

Remember this when you watch the royal wedding tomorrow night. We don't need to put up with interference in our affairs by people who are only interested in continuing their own cushy undeserved sinecure.