Australia's refugee kidnapping: Our own Voyage of the Damned

What happens to 153 Sri Lankan asylum seekers held by Australia in a prison ship on the high seas will reflect starkly on the character of our nation for years to come, writes Victoria Martin-Iverson.

IT IS IMPOSSIBLE to properly consider the recent drama played out on the high seas and in the courts regarding the fate of Sri Lankan asylum seekers without reflecting on the horrors of what occurred in the dying days of that country’s civil war.

As a consistent visitor to the internment camps detaining people who arrive seeking protection, I noted with a rising sense of dread – as did my colleagues – the wounded and the maimed we began to meet there in late 2009, early 2010.  At times, the visiting space had more the ambiance of a casualty unit then an immigration detention centre.  We got to know the legless, the armless, the shrapnel ridden brought to Perth IDC from other more remote centres for what passed for medical treatment.

I sat with grown men sweating in pain from terrible injuries inflicted months, or even a year, earlier. I met men with chunks of metal still visibly extruding from their bodies, or their scalps, months after arrival on Australian soil.  And I thought then that about the cruellest thing I could witness was the mere dulling of their pain during their interminable wait for medical treatment with the ubiquitous Panadol.

Over time, I came to understand the terrible war crimes committed against the Tamil people in the government declared “no fire zones”, where civilians and even hospitals were relentlessly shelled with heavy artillery, and over 40,000 are said to have died after being encouraged to shelter in those very zones. The disappearances, the torture, the ethnic cleansing continues to this day —  a veritable catalogue of government atrocities.

The savage civil war certainly saw grotesque abuses by both sides. But having won the war, the government’s ongoing pogroms against the remaining civilian populations have been termed by some observers as the first genocide of the new century.

The recent drama that played out in Australia’s “contiguous waters” can only be understood against the backdrop of the crimes against humanity that the Sri Lankan government is perpetrating to this very day.

Despite the disingenuous comments by Tony Abbott that Sri Lanka is a nation at peace, the truth for anyone that cares to investigate the matter is that it is still a nation riven by conflict and ethnic and political tension that the surrender of the LTTE (Tamil Tigers) in 2009 has dampened, but hardly eliminated. Government opponents still disappear with disturbing regularity when the infamous white vans arrive at family homes, businesses, or news outlets. Indeed, over 26 journalists have disappeared and over 80 have gone into exile in the years since the end of the civil war

It is this nation Scott Morrison appears determined to return desperate Sri Lankan asylum seekers to, much to the dismay of refugee advocates.

Like others familiar with the human rights situation in Sri Lanka, I was incredulous that entire ships full of desperate people could be summarily handed over to their persecutors.

It is clear that the government had no interest in the fate of any of those they are determined to return. The mantra of “stop the boats” predominates, superseding any consideration of law or decency. The consequences of arrest, torture or even death of those now in Australian custody is sacrificed in the interests of the single-minded pursuit of a narrow policy objective that this government has set itself: to stop the boats regardless of the costs.

That this is done under a veil of secrecy serves one purpose. Not, as Scott Morrison claims, to foil the people smugglers, but rather to keep people – such as the 153 men women and children on the customs ship – out of the reach of Australian law.

Advocates and human rights lawyers worked tirelessly over the weekend to get the necessary names and authorities to be able to mount a challenge to the government’s actions.

The seizure, detention and refoulement of these asylum seekers abrogated international law, but with no compellable mechanisms that fact was of little practical utility for preventing their transfer to the Sri Lankan authorities.

Urgent injunctions against the transfers were filed and the High Court under Justice Susan Crennan decided that the matter was of such legal significance it must be heard by the full bench of the High Court. Under scrutiny will be the egregious practice of “enhanced screening” (rather than actual refugee claims assessment) and the legality of the “Operation Sovereign Borders” regime. The hearings are expected to last for weeks.

Meanwhile the fate of the 153 people held hostage aboard an Australian customs vessel remains uncertain, while those already handed back, from the second boat intercepted by the Australian authorities, are said to be facing criminal charges in Sri Lanka.

The legal and technical issues will be argued out beginning this Friday in the courts.

And all the while, a little girl will look out at us from the photo supplied by her relatives — a little girl whose life is being decided by government expediency and an irresistible impulse to pander to the worst impulses of our society. The relatives have pleaded for no harm to be done to their baby. Neither Scott Morrison nor the courts will heed that plea. The former will only listen to the dictates of cynical political expediency. The later will decide based on the narrow and technical elements of law.

It may not yet be a legal precedent as such, but the injunction ruling and the post-injunction hearing by Justice Crennan may have already set a precedent the refugee movement has been seeking. That there are legal limits to the power of the Minister for Immigration.

What we are now left with is a simple question: not is the return of persecuted people to their persecutor just, or decent, or moral (because we already know that answer), but simply is it legal?

And like those doomed souls on the German Ocean liner the St Louis , who in 1939 desperately sought, but did not receive asylum, 153 men women and children wait out on the high seas for safety, freedom, and justice. Their fate will reflect starkly on the character of our nation for years to come.

Victoria Martin-Iverson is a leading campaigner for the Refugee Rights Action Network. 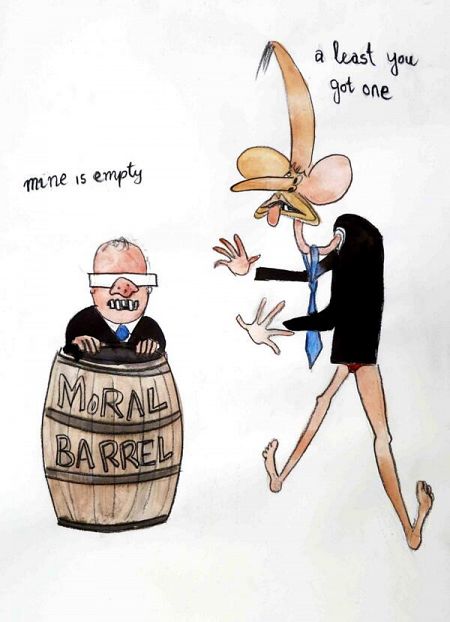 See more cartoon and art by Matt Bissett-Johnson at mattbj.blogspot.com.

James Packer and Sri Lanka: No country for a new casino

Australia's refugee kidnapping: Our own Voyage of the Damned

10 July 2014, 2:00pm What happens to 153 Sri Lankan asylum seekers held by Australia in a prison ship on ...
Join the conversation
comments powered by Disqus
News updates