An Australian Republic: the core reasons

The essential reasons for an Australian Republic are obvious and important, writes managing editor David Donovan. 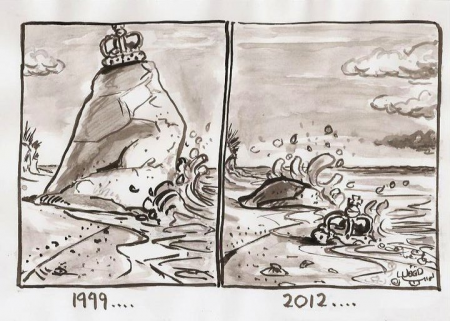 There are many good reasons why Australia should become a republic, but the core ones are obvious and important.

Firstly, an Australian Republic is about having an Australian head of state. Whilst it is true that Australia is a functionally independent nation, and the Governor General acts as a de facto head of state, under our Constitution the British monarch is the font of all legal power in Australia and our formal head of state. Until we break our last Constitutional links to the mother country, our nationhood is incomplete.  Now, after 110 years of Federation, Australia must finally join the world of nations as a full equal, unshackled to any other nation.

Perhaps even more importantly, the British monarchy is inequitable and undemocratic. It goes against commonly accepted Australian values about which we are justifiably proud – such as fairness, equality and egalitarianism – for Australian citizens to be the subjects of a foreign unelected figurehead monarch. Much more so when we consider that this head of state is selected not through merit, but through the principles of hereditary male primogeniture, and with Catholics being specifically ineligible. This is discriminatory and unfair, and wouldn’t be allowed under the anti-discrimination provisions of Australian law, yet is still the method of selection for the Australian head of state.

What sort of example are we setting for our children when we say that our society is set up to reward hard work and talent, and with diligence and tenacity you can get anywhere in life—anywhere, that is, except for the very top job, which is reserved for the first born male – or, if no males are available, female – non-Catholic individual born into a particular highly privileged English family.

That we still maintain links to this inequitable and unfair system – and have not asserted our full independence – is an affront to our national dignity. It is something that, irrespective of any fondness we may feel for a particular monarch, we should resolve to correct at the earliest possible time. The current system does not complement a free and fair Australia.

Let’s have a plebiscite on the question Australians have the knowledge now to answer with confidence: “do you want an Australian Republic with an Australian head of state”. If this is resolved in the affirmative, let’s work to create the best republican Constitution in the world and put it to a referendum against the current system. If successful, we will then be able to move forward into the new millennium as a fully free, united and confident nation.