To an Aboriginal person, the term is visceral and it is personal.

To a large portion of Australians, however, the term is abstract – a concept – a historical "thing" which the government has "apologised for".

The recent comment by Alan Jones on 2GB radio yesterday that “we need Stolen Generations” and agreeing with a bigoted listener that “half the Stolen Generations were taken away for their own good” demonstrates clearly how uneducated a great many Australians are — even those with a responsibility to educate themselves because of their notoriety.

Despite my obvious bias against right-wing sensationalist bigots such as Jones, I think it is important to utilise opportunities such as this to reinforce the learnings of the Bringing Them Home Report, which are ultimately that the removal of children was a conscious and malevolent attempt at a genocidal program of "breeding out" the black and assimilating those determined not "full-bloods".

The reality of child removals was that the children were sent to religious camps and reserves, where they were subject to vigorous reading, writing and arithmetic whilst being trained in their physical service roles — domestic duties for girls and labour for boys. During this time, they were prohibited from practicing their culture and physically punished if caught speaking language or practicing culture. 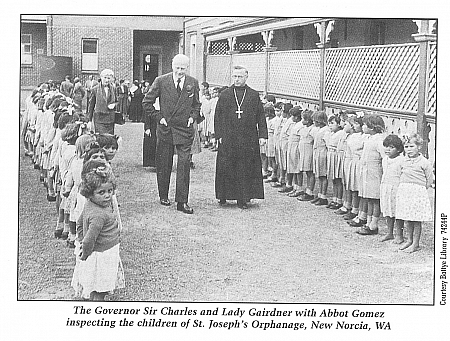 Children were spread all over the country in different homes and told their birth parents either didn’t want them or were dead and those nuns and priests that were entrusted with the care of the children abused them physically, emotionally and sexually.

To drive home the point of how fundamentally erroneous and offensive the views of Jones are – and because no amount of me telling you how brutal the conditions were for members of the Stolen Generations will make you understand without real context – IA here shares some accounts that were included in the National Inquiry into the Separation of Aboriginal and Torres Strait Islander Children from Their Families.

Trigger warning for Aboriginal and Torres Strait Islander Australians: Some of the accounts included below may trigger memories and emotions associated with the acts committed throughout the period now referred to as the Stolen Generations.

“Mum remembered once a girl who did not move too quick. She was tied to the old bell post and belted continuously. She died that night, still tied to the post, no girl ever knew what happened to the body or where she was buried.”

Paul recalls of his time in Foster placement:

“I was acutely aware of my colour, and I knew I was different from the other members of their family. At no stage was I ever told of my Aboriginality, or my natural mother or father. When I'd say to my foster family, 'why am I a different colour?', they would laugh at me, and would tell me to drink plenty of milk, 'and then you will look more like us'. The other sons would call me names such as 'their little Abo', and tease me. At the time, I didn't know what this meant, but it did really hurt, and I'd run into the bedroom crying. They would threaten to hurt me it I told anyone they said these things.”

They told me that my family didn't care or want me and I had to forget them. They said it was very degrading to belong to an Aboriginal family and that I should be ashamed of myself, I was inferior to whitefellas. They tried to make us act like white kids but at the same time we had to give up our seat for a whitefella because an Aboriginal never sits down when a white person is present.

…. We had religion rammed down our throats from hypocrites who didn't know the meaning of the word. We used to get whipped with a wet ironing cord and sometimes had to hold other children (naked) while they were whipped, and if we didn't hold them we got another whipping. To wake us up in the morning we were sprayed up the backside with an old fashioned pump fly spray. If we complained we got more. Hurt and humiliation was a part of our every day life and we had to learn to live with it. 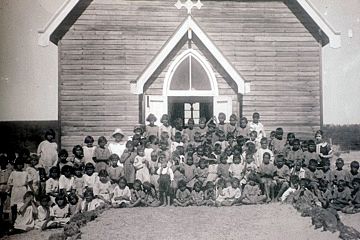 While I was in first year high school I was sent out to work on a farm as a domestic.

….the man of the house used to come into my room at night and force me to have sex. I tried to fight him off but he was too strong.

When I returned to the home I was feeling so used and unwanted. I went to the Matron and told her what happened. She washed my mouth out with soap and boxed my ears and told me that awful things would happen to me if I told any of the other kids. I was so scared and wanted to die. When the next school holidays came I begged not to be sent to that farm again. But they would not listen and said I had to.

…This time I was raped, bashed and slashed with a razor blade on both of my arms and legs because I would not stop struggling and screaming. The farmer and one of his workers raped me several times. I wanted to die, I wanted my mother to take me home where I would be safe and wanted. Because I was bruised and in a state of shock I didn't have to do any work but wasn't allowed to leave the property.

When they returned me to the home I once again went to the Matron. I got a belting with a wet ironing cord, my mouth washed out with soap and put in a cottage by myself away from everyone so I couldn't talk to the other girls. They constantly told me that I was bad and a disgrace and if anyone knew it would bring shame to Sister Kate's Home.

The above recollections are – sadly – not unique. The sheer number of stolen children who experienced atrocities of this nature are what led to the Inquiry but which was conducted by the Human Rights and Equal Opportunity Commission (HREOC). The Inquiry report was tabled in the Commonwealth Parliament on 26 May 1997, the day before the opening of the National Reconciliation Convention. Bringing Them Home made 54 recommendations.

Alan Jones, UR welcome to listen to this mp3 of my nanna Emily if you want to know how beneficial being "stolen" was https://t.co/BuwFy3R1DA

After Bringing Them Home was released, he told an audience in Canberra:

“Children were removed because the Aboriginal race was seen as an embarrassment to white Australia. The aim was to strip the children of their Aboriginality, and accustom them to live in a white Australia. The tragedy was compounded when the children, as they grew up, encountered the racism which shaped the policy, and found themselves rejected by the very society for which they were being prepared.”

The Inquiry found that between one in three and one in ten Indigenous children were removed from their families under past government policies, but could not be more precise due to the poor state of records. There are many children who have not found their way home and these families remain fractured and hurting.

The Stolen Generations did not “have to happen” — they were the most cruel and dehumanising period of history and the ramifications continue. To say that the children were removed for their own good is a disgraceful perspective, coming from a place of ignorance and privilege.

The Stolen Generations were a group of innocent people brutalised by the Government and the Church, and the ramifications of the acts by those institutions continue this very day.

Shame on you, Alan Jones! You are a man of means with a privileged position in society and a responsibility to educate yourself, but instead you remain a troglodyte of the very lowest order.