The 2016 Census, Brandis' diary, Nauru and other Turnbull catastrophes

Barely a month after being sworn in, the Turnbull Government is in diabolical trouble.

Its census, sensationally botched; its gulag on Nauru suddenly exposed in 2000 documents leaked to public view while Tony Abbott makes trouble for his equally inept successor by condoning hate speech — inflaming a body politic well-infected with prejudice and dissension.

Legacy issues also loom large. Barnaby Joyce says he is moving an entire government department to his electorate while George Brandis refuses to let anyone see his diary, despite the Federal Court’s advice, after failing his appeal to the Administrative Appeals Tribunal.

Trouble is brewing, however. Two thirds of the staff would quit, according to their union. There is also the cost. Relocation will cost $24.1 million and potential redundancy up to $10 million.

But let’s be fair. It is easy for a newly-elected Coalition Government to falter as its first, feckless steps towards being in charge lead it to betray its election promises. Scott Morrison is already watering down the changes to superannuation tax concessions his party took to the election to protect the wealthy.

Conservative governments must look after their backers, the banks, News Corp, Alan Jones, The Minerals Council and other industry associations and special interest groups, plus the six hundred or so professional lobbyists for the rich and powerful who run Australia without being required to declare who funds them. It’s a full dance card even if you’re hot to trot.

Nor is it uncommon – given the PM's rush to “hit the ground doing”, for the odd detail to be overlooked – such as the picayune need to first govern itself or to do the irksome due diligence required.

For example, it may have been wise to ensure first pick royal commissioner Brian Martin was, indeed, retired, as George “My Secret Diary” Brandis wrongly claimed. Martin may well have been seen to be conflicted by His Honour’s employ in the NT Justice Department or his daughter’s work as a justice adviser to the NT Attorney-General in 2011.

But nothing – not even the Abbott mob’s sublime incompetence – can match the Turnbull’s Government’s capacity for catastrophic decision-making, its eagerness to dig its own grave.

Why bother w experts when we have Mr "Internet" Turnbull? #CensusFail - failure to listen to experts https://t.co/pw6B8DPxP7 @IndependentAus

The Coalition’s 2016 Census is just such a black hole, an unmitigated disaster for all concerned — the ABS, the public and the Turnbull Government. It will help to torch whatever remains of Turnbull’s credibility.

Boosted as a secure online survey – an oxymoron which just happens, for the first time, to contain your name with records to be kept for ninety-nine years – the census is suddenly hugely compromised along with the Turnbull Government as its on-line triumph of cost-saving efficiency is revealed to everyone as almost as much of an costly fiasco as its NBN.

Like the Turnbull Government’s first weeks in politics, the census fiasco is one of those theatres of engagement where nothing goes right. A series of failures to communicate and to plan its implementation effectively, means that the census is now resented as an invasion of privacy before any of its many technological shortcomings are taken into account.

Were ministers over-confident or was everyone conned by IBM spin doctors again? IBM conned the Queensland government into a $60 million online solution that cost that government $1.2 billion to fix before it could ensure health workers were properly paid. Not that this deterred Hockey and Abbott from giving IBM the nod with the ABS Census contract.

They were certainly complacent. In three years, the Coalition assigned no fewer than three ministers to overseeing the census. Current chump, Michael McCormack has three weeks experience to draw upon to manage the disaster — a process which entails boasting how well everything is going and how everything is safe and that no data was compromised, despite what the experts claim.

No-one will step up to take responsibility but its failed census is a massive own goal for the Turnbull Government before the other team has even taken the field. Its promises and reassurances, exploded, the PM and his team have shredded their credibility and trust.

Adding to the disarray, MPs publicly carp and bicker over what went wrong, whose fault it is, even whether the cyber-attack comes from within Australia, as Christopher Pyne asserted, or the U.S. as other ministers and the PM have claimed. Finger pointing continues.

Uncertainty rules. Even a week on, no-one knows whether the ABS will have the seven million responses it says it needs to make the $470 million exercise “statistically significant”.

Time for agility. Whatever went wrong, or however much, Turnbull is quick Thursday morning to tip buckets over the ABS and IBM; both of whom earn his rebuke on commercial radio for not being prepared. Like a peeved school headmaster, he says he is “bitterly disappointed” by their lack of preparedness for an “entirely predictable” attack. Or whatever it really was.

Should we be so paranoid? Mick Young famously advised that when there’s a choice between a conspiracy and stuff-up, go with the stuff-up every time. Applying Young’s razor, it is likely that the website was not designed to deal with six million simultaneous logins and crashed. This does not preclude some suspicious activity also taking place but it does rule out such feverish speculation which has led some to blame the Chinese.

It’s an ill wind, however. The failure of the website has been a boon to the paranoid and has boosted the climate for wild and often bizarre speculation nurtured by some Coalition MPs and surely adds a few more dingbats to a drama that is just begging to be dubbed our mature conversation on irrational hysteria — soon.

The government has released this easy to follow graphic to explain the #CensusFail pic.twitter.com/RWy083ZxmF

She detects the work of 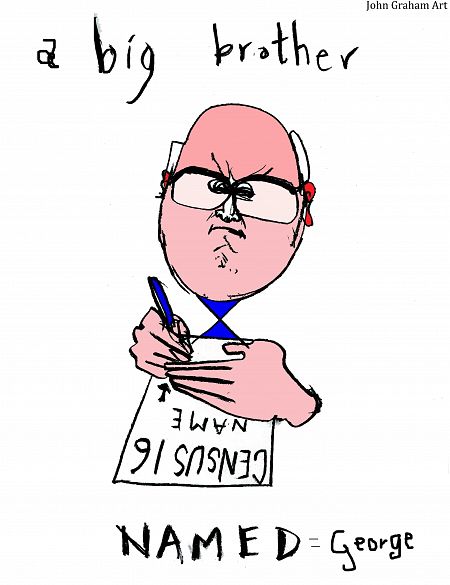 Less in doubt is how far our Attorney General will go to conceal his affairs. Brandis refuses to supply his diary as requested under FOI by Labor’s Mark Dreyfus, who wants to check that Brandis consulted any community legal services before he axed their funding two years ago.

The 2014 budget slashed $6 million from community legal centres, along with $15 million from legal aid commissions and $43 million from advocacy services. A Human Rights Law Centre (HLRC) report argues that such decisions were 'undermining the nation’s democracy'.

Brandis has argued, unconvincingly, that sharing his diary is too big an administrative burden and will interfere with his workload — a case the Administrative Appeals Tribunal has rejected. An unhappy Brandis is now appealing to the full Federal Court, at a cost of $30,000. As Richard Ackland observes, it is an expensive way of hiding information — especially by a man in charge of our freedoms.

Freedom is of course just another word for nothing left to lose to those who come by sea to seek our asylum. The Coalition Government also faced calls to widen its NT inquiry to include asylum seekers on Nauru. Resourcefully, three non-government organisations send legal advice to the commission, showing that it could examine incidents of child abuse on Nauru.   Art by John Graham @JohnGrahamArt

Its NT Royal Commission containment operation fails utterly as the uncovering of the truth about Nauru prompts experts to uphold a responsibility the Turnbull Government would rather duck. Real leadership is clearly called for.

Luckily, others are keen to lend a strong right hand. Rapprochement already over, Eric Abetz helpfully tells Turnbull that a real cabinet would include himself and his mates Kevin and Tony.

A late addition to the programme of the society which aims to defend the Australian Constitution against all who would attempt to undermine it, Abbott keeps a straight face as he deplores hyper partisanship even helpfully offering his public support to those cross bench nut jobs who want to change section 18C of the Racial Discrimination Act 1975.

Dog-whistling on 18C, or George Brandis’ “right to be a bigot”, brings comfort to bullies and lovers of hate speech, ignores all power relationships and assumes erroneously and dangerously, as former vet David Leyonhjelm and another nutter on the senate cross bench put it last Sunday on Insiders that offence is “never given it is always taken.”

“I don’t think, you know, Tony plans to be a backbencher for the rest of his life.”

A decimated ABS is publicly upbraided for its census stuff up by a duck-shoving PM in damage control. “Heads will roll”, he says, a phrase with chilling international resonance.

Turnbull and Dutton deny “unsubstantiated allegations” as they call the 2000 official incident reports of responsible officials, detainees and other eye-witnesses on Nauru, saying the government would review the reports to decide what action should be taken, but not before Dutton tells media “only twenty of them are urgent.”

Later Dutton goes completely overboard in blaming the victim and in continuing the Coalition line that asylum seekers are illegals and therefore anything they say is illegitimate, by claiming that some have “self-immolated” or self-harmed in order to reach Australia.

Manus & Nauru are at crisis point. They have to close, question is whether Turnbull will act before a child dies https://t.co/40uqomxPPs

It’s a line that goes all the way back to October 2001 when John Howard lied about babies being thrown overboard. He closed Christmas Island port to prevent independent observation.

For despicable nonsense, Dutton can’t be topped. But Scott Morrison, is quick to try diminishing the legitimacy of the reports, although they are objective records of those actually involved in the camp.

“It’s important to stress that incident reports of themselves aren’t a reporting of fact; they are reporting that an allegation has been made of a particular action.”

On his first day in office Turnbull promised:

” … an open government, an open government that recognises that there is an enormous sum of wisdom both within our colleagues in this building and, of course, further afield, echoing the Liberal Party promise before the 2013 election to “restore accountability and improve transparency measures to be more accountable to you.”

What we've got instead, is a Prime Minister ducking for cover at every opportunity unable to take charge of his own party, let alone meet the challenges of government.

You can read more from David Tyler on his blog Urban Wronski Writes, or follow him on Twitter @urbanwronski.