The Madness of Christopher Pyne

Christopher Pyne is as big a joke as Sarah Palin, says Bob Ellis, and should have four fingers held up in front of his face.

There may be no other option henceforth, I suspect, than redefining ‘failure’ as ‘success’.

Pyne succeeded in his reforms to the Gonski reforms; of course he did. Abbott succeeded in getting vital information out of Mrs Yuduyono’s bedroom; of course he did. Scott Morrison succeeded in giving the boat people nowhere to go back to but Christmas Island; what a good thing that was. Julie Bishop has riled East Timor, China, Niugini, the US, the UK, the EU, Russia and sixty-nine participants in the Global Warming conference, and is everywhere admired for this.

In the next week Abbott will prevent or annul ten thousand gay weddings in the ACT  his most famous victory, despite twelve million Australians wanting them to occur.

This is a government that is not only successful, but barking mad.

The sanity of Christopher Pyne must be urgently investigated by a Senate Inquiry. He speaks of ‘envelopes’ and ‘a Shorten shambles’ and how ‘Unity Ticket’ meant disunity everywhere, and how the abhorrent system Gonski’s deliberations were intended to cure was a roaring success that needed no tinkering — none whatsoever. That his own academically challenged sons are doing very well, thank you, and need no additional help.

It is probable psychosis of this order has been around in politics from Year One.

Henry VIII invented Protestantism in order to achieve the loins of a proud young woman and gave her syphilis because his first marriage, he swore, was ‘incestuous’ and rife with dead bastards. George III in rare moments of lucidity believed he was a peacock. Hitler, his veins agog with bull’s sperm, moved imaginary armies around a map of the world. Reagan thought rockets in outer space would bring down enemy rockets in outer space that never went there. George Bush thought that God, his ‘true father’, wanted him to level Babylon and thus fulfil Isaiah’s prophesy.

And Christopher Pyne believes ‘unity ticket’ means hobbling the lives of a million pupils and smashing the hopes of their parents and grandparents. That there was an ‘envelope of payment’ that allows him to do this. That ‘unity’ means three states get money with no strings attached, and the others after 2014 may get none at all. It is hard to think of an utterance more like ‘I am a peacock!’ in our time.

What should occur is an ambulance in the Adelaide Hills that Jay Weatherill commands to take him away.

Handcuffs or a straitjacket may not be needed, sedation will probably suffice. He should then, in a small room, be shown four fingers and asked how many there are. If, as is likely, he refuses to answer, he should be delivered, bound and gagged, to the floor of the Senate and then asked to answer, with nods and headshakes, a number of questions on policy.

It is no more than he deserves. He has turned our democracy into a burnt forest in which a few singed, chittering monkeys remember how it was.

He is as big a joke as Sarah Palin and should soon, like her, be frogmarched out of world history. 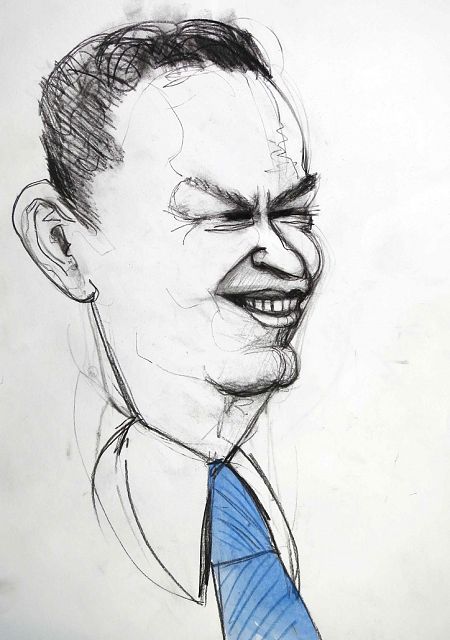