Activist comedian, Rod Quantock, promises you'll be "apoplectic with fear" (or just plain "scared shitless") as he takes you with him through the gates of hell into the catastrophic world of runaway global warming. 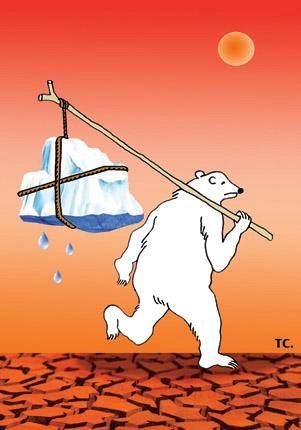 
Only two things are infinite, the universe and human stupidity, and I'm not sure about the former.

Time has shown that Einstein was right to be sceptical about the universe — it has limits and bounds in space and time.

And science, that pinnacle of rationality, measures the pulse of the planet. The prognosis – we are about to open the gates of hell and throw our children through them. It's the climate, you see, we're changing it, and as far as the climate is concerned a change is as good as a holocaust.

But before we go any further, take a moment to complete the following questionnaire.

If you answered a) you're a winner! You have lived a full, happy, healthy life in the best of all possible carbon-fuelled worlds. In your wake, a decades-long trail of ecological devastation and carbon dioxide emissions. But hey, you won't be around when the CO2 really hits the fan, so jackpot, you win! If you don't know want to know what happens when the CO2 really hits the fan, and believe me, you don't, stop reading now. Spare yourself the torments of pitiless despair and remorseless guilt and watch a kitten on YouTube.

We'll give you a minute.

If you're still reading, why don't you join those who answered b) and follow me?

Okay, here we are. Make yourselves comfortable; tea, coffee and Nembutal are over there. Right, well let's not beat around the bushfires — the climate is changing. The science has been in for decades, and not just any science, it's every science: physics, chemistry, biology, geology, palaeontology, microbiology, meteorology and a hundred other mutually informed ologies all know we are changing the climate, how we are changing it and how fast we are changing it. (It's really fast!)

The symptoms of our rising fever are evident everywhere — the hottest day, the hottest month, the hottest year, the hottest decade, the longest drought, the worst floods, the worst fires, the worst storms, the highest rate of species extinction. And all these symptoms will increase in fury, sweeping away the livelihoods and lives of millions. Hunger, disease and resource wars will take millions more.

If we do nothing about climate change — and incidentally what are we doing about climate change? Altogether now: Nothing! If we do nothing about climate change, by the 2050s unquenchable bushfires will roar their way into our sprawling outer suburbs, making Black Saturday look like Pancake Tuesday. Tens of thousands will flee the flames to the inner cities. Power will fail, services will collapse, food shortages and heat will gnaw at the population, riots and looting will explode on the streets, and the Australian Tennis Open will be cancelled. And that's just the beginning of the end! If you answered b), panic!

Nature will be unable to adapt to the speed of the changing conditions in the gas chamber of our choking atmosphere. Forests and reefs will become deserts and icecaps will melt. (Do you really want to be the one who tells the kiddies that Father Christmas drowned?) Everything from worms to civilisation will be extinct within the lifetime of a child born today, and their children, should they make it, will make it with as little as 10 per cent of all things bright and beautiful to keep them company. (Sorry, God!)

There is no time for the denier, no room for the sceptic and no punishment too great for the liar. Climate science isn't a fraud or a swindle, science has no ulterior motive, no hidden agenda. It isn't a socialist conspiracy to overthrow capitalism or a plot to create a one world government. Climate scientists aren't dishonest and they don't make it all up just so they can wallow in the rivers of gold that flow from the public purse into research.

So let's just get it over and done with now: Anyone who denies human induced climate change is either:

Tick a box, deniers and sceptics, and please note you may tick more than one box. Whatever you tick, will you just go and stand over there with David Irving and shut up. And for the rest of you, start screaming! Oh, and did I mention the oil is running out? Continue screaming.

(Deputy editor's note: we at IA pride ourselves on publishing stories mainstream media reject! Rod's blistering wake-up call was passed up by The Age with the comment: "about time someone told it like it is but we have no space"!)