Morally void: Our failure to act in Syria

When the majority of a population living in oppression cry out for liberation, do we have a moral duty to assist them, even if it means going to war? Jed Lea-Henry looks to the uprising in Syria as he considers this thorny moral and ethical question. 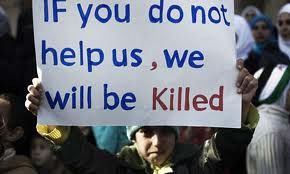 Armed conflict has been a traditional hotbed for deep philosophical discussion.

After all, when is there a comparable circumstance in human affairs where there is so much to be gained and lost? In principle, war of any kind explicates human nature attempting to execute the most fundamental of ideals and satisfy the most primal of instincts.

This surely lays a basis for deep, unambiguous moral discourse. Indeed much public dialogue has been devoted throughout history to Jus Ad Bellum (the justice of war or just war theory). Cicero, St Augustine of Hippo, St Thomas Aquinas, Hugo Grotius, John Locke, Immanuel Kant and John Stuart Mill have all made major contributions to the ideas of just cause, proportionality, Jus in Bello (Justice in War) and the principle that a moral abhorrence to war must be compatible with a willingness to engage in war for it to hold any ethical basis. From such ideas were born the League of Nations, the UN and indeed international law, which is nothing short of an attempt at universal moral codification. However, such ideas and forward thinking seems void from today’s conflict analysis, it appears we have inadvertently lost our moral compass for war.

Hence it came as a relief to hear a recent change in both the tone and language from prominent international actors in relation to Syria’s year-long conflict. The cowardice, the appeasement, the desperate attempts to avoid the sort of ethical idiom’s that would necessitate action had finally given way. Vocabulary such as ‘atrocity’, ‘massacre’ and ‘war crimes’, previously only reserved for the liberal leaning media and the masses of refugees fleeing to Lebanon, are now being espoused by the world’s top diplomats.

It seems the straw that broke this camel’s back were recent reports from the Syrian town of Houla, being subject to shelling by heavy artillery and government supported militias proceeding house to house, executing citizenry, regardless of age or sex. The response of the International Community to this brutality is welcome, yet it just shows how comfortable we have become in taking our moral grounding for war, a la carte. The implication here is that simply due to circumstance, the 100 people killed in Houla triggers a greater ethical impasse than the previous 10,000.

“Tipping point” was the phrase used by UN-Arab League envoy Kofi Annan, without clarifying what it was specifically about previous events that failed to have a similar ethical impact on him. There’s an inference here that we are willing to tolerate leaders systematically killing their citizens without the slightest sign of relenting, so long as it’s done to a degree that allows us to alleviate personal responsible. This is a degree that the Syrian regime seems have finally crossed — yet we are, as a collective, left morally bankrupt if we allow such a degree to exist at all.

There is a simple yet deeply important principle here: if the majority of people within a country wish for change, then we as fellow members of the species have a moral obligation to assist — especially if the change amounts to liberation. It’s only as much as we hope others would afford ourselves in differing circumstances. Human solidarity is not just a theory — it is evolutionarily innate within us all (or at least the majority of us); we wouldn’t have survived this long as a species had it not been. To allow situations like Syria to continue unabated is an attempt to ignore all that we are – that which makes us unique from other mammals – free will of moral significance. It’s incomprehensible to think there would anyone of good conscience still willing to proclaim that the Syrian population would not desire emancipation from the Assad regime.

Theirony was sadly inescapable with Ratko Mladic fronting The Hague in recent weeks to be presented with 11 separate criminal counts relating to war crimes during the Yugoslav conflict. Mladic’s role in the Srebrenica massacre laid the foundation for what we now call Ethnic Cleansing — after systematically executing 8,000 Bosnian-Muslims. Yet, despite this taking place over the course of a week and in a region closely observed by both satellite surveillance and UN monitors, it went unreported at the time. It therefore stands to reason that in Syria, where a media blackout has muffled most attempts at reporting, we must brace ourselves for the likelihood that such crimes just haven’t made it to our TV screens yet.

John McCain, on the floor of the US Senate, claimed Syria to be


"…the scene of some of the worst state-sponsored violence since Milosevic's war crimes in the Balkans or Russia's annihilation of the Chechen city of Grozny...accounts from refugees suggest a humanitarian catastrophe”.

Regardless, the international community seems immune to action. Contributing to this inertia is the three most recent military engagements by Western allied nations; Afghanistan, Iraq and Libya. Since our involvement, life expectancy in Afghanistan has increased by 20 years, women have been liberated from tyrannical tribal laws, education is widely available and the streets now are bustling with free enterprise and cars (banned under Taliban rule); Iraq is now a functional democracy, per-capita GDP is at record levels, broad-spectrum standard of living has increased, corruption is being stamped out and ordinary Iraqi’s no longer need be fearful of their own state; and Libya, even in the short time since the intervention, has produced record levels of GDP, record stages of social equality, regional disadvantage has dropped and youth employment is at all-time highs (a major factor leading to the uprising).

Yet, in spite of this, all three conflicts surprised us in terms of length and cost. Just see how the dialogue on Afghanistan has shifted to exit dates, lost causes and incompetence — it was once about the moral imperative to free a population from an occupying force. It now seems impossible to mention any of these countries success stories without clarifying them by both cost and inconvenience. It doesn’t take much for the most moral of causes to be tainted by unexpected difficulties and for us all to lose our stomach for war

The British declaration of war on Nazi-Germany – a nation that sought an ideological peace and alliance with Britain – was done so in full knowledge of German technical superiority and readiness. The Parliament was well aware of the very real existential threat the nation would face on the back of this decision and the undoubted human and economic cost that would be suffered. Just as countless other wars have been, it was a decision driven by a fundamental humanitarian ethic.

Following the fall of France, Winston Churchill staunchly refused discussions of any sort with Nazi representatives, saying Britain would

Of course, there is a moral argument in relation to the ramifications of war. Where do we stop? Who’s next after Syria? Russia? China? Yet these are the tired arguments of those already inclined to cowardice; such questions themselves are short of all moral perspective. As a previously mentioned matter of principle, if a majority of people desire change and seek our help then we have an obligation to help them. Yet very few nations are bound by such a paradigm — least of all Russia and China, whose populations seem willing to accept certain social limitations in return for growth, stability and security. The situation that Syria finds itself in now is fairly unique; a population held prisoner by a dictator with no concern for the betterment of his own people.

As the UN Security Councils fast becomes defunct as a credible organisation due to veto welding members voting out of self-interest, the international community seems content to sit back and accept this situation as an elevation of their ethical responsibility. In happily accepting that their hands are tied, member nations have turned to advocating dialogue between the warring sides as the only way forward in securing a Syrian peace. They seem more than willing to forget that Assad does not wish for peace — it was peaceful demonstrations that proved the catalyst for him to turn the military on his own cities.

Regardless of how many symbolic UN Security Council resolutions are passed, how many times an impudent Kofi Annan begs for peace, or how many sanctions are imposed, Assad is without options. If he were to cease waging war on the population and remove the army from the streets, then protests would surely return — one would imagine, in greater force. Such a presence would spell the end for the Assad regime. For Assad and his family, that would mean criminal charges in both Syria and The Hague, with it unlikely that any nation would offer asylum. Hence the only option now available to him, and all he is hoping for, is exactly what we are giving him... Enough time to break the will of the Syrian people so they quietly return to subservience.

If an international force finally gathers enough resolve to engage militarily on the side of the Syrian rebels, it will be, just as it was in Bosnia, an intervention better late than never.  There is some hope this week as the UN Human Rights Council holds a special session on Syria, that the international community can rediscover some resolve and moral fortitude. For the sake of the Syrian people we have an obligation to engage in a purely ethical discussion of our responsibility as fellow human beings? Such a discussion in relation to Syria can only lead us to military intervention, regardless of cost and as a matter of principle.

You cannot be a creditable pacifist if you are cannot recognise that sometimes conflict is the only available moral option. We must not require that nations in similar positions to Syria wait, until every ounce of our humanity is degraded by atrocities before we find it necessary to intervene.

(Editor: If you have a different view about the need for military intervention in situations like Syria, or the worth of previous interventions mentioned by Jed, please email your contribution for publication to editor@independentaustralia.net ― we would be delighted to hear from you.)
HUMAN RIGHTS Afghanistan China Iraq Jed Lea Henry Libya Nazi Germany Russia Syria UN Security Council war
Recent articles by admin

Morally void: Our failure to act in Syria

10 June 2012, 1:34pm When the majority of a population living in oppression cry out for liberation, do ...
Join the conversation
comments powered by Disqus
News updates