Did NXT's Sharkie withdraw support for Turnbull? No, just another media fail

THE TURNBULL GOVERNMENT appeared to be teetering on the edge last Friday, when a Fairfax headline trumpeted:

The survival prospects for the Turnbull government continue to narrow, with another key crossbench member of Parliament withdrawing support.

Rebekha Sharkie of the Nick Xenophon Team said that Prime Minister Malcolm Turnbull needed to stand aside from his cabinet two ministers with citizenship problems, pending a High Court ruling on their eligibility.

Ms Sharkie told Fairfax Media on Friday that "I am quite frustrated with the Prime Minister" for retaining in cabinet Deputy Prime Minister Barnaby Joyce and Regional Development Minister Fiona Nash.

Mr Turnbull was showing "disrespect to the Australian community" and she has decided she will no longer support the government on the survival matters of confidence and supply. 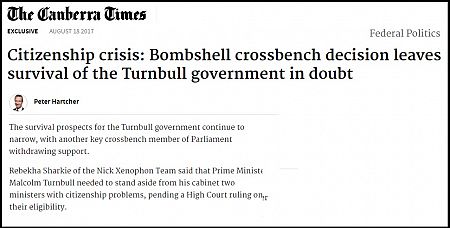 This sensational claim was swiftly and unquestioningly amplified by multiple articles in numerous other media outlets, including the ABC. Fairfax also repeated the claim in two subsequent pieces published on Friday.

The situation changed on Sunday, when Sharkie was apparently publicly overruled by NXT leader Nick Xenophon, who reaffirmed his party's support for the Government

Reports suggested Sharkie had been rebuked. Xenophon was quoted as saying he had “spoken to his colleague about the matter”.

While several reports of Nick correcting Rebekha were published on Sunday, it was not until that evening that a sole article with a statement from Rebekha herself was published, via The Australian. It stated that Rebekha ‘was forced to back away from a report she would no longer support the government’ and that she had been 'taken out of context'.

So what happened? Was there a split in NXT or had Sharkie been slapped down by the leader?

In truth, it was neither. It was just another old-fashioned case of mainstream media fail.

“Rebekha never said that she was going to withdraw supply. Rebekha’s told the Prime Minister that she’s unhappy and it’s making life untenable for her. Rebekha has not said that she will withdraw confidence or supply. She stands by the statement on her Facebook page.”

Ms Cooper said that, despite Rebekha Sharkie's differences with the Government, she had no plans to withdraw supply.

So why did Fairfax so confidently report that Rebekha Sharkie had withdrawn her support?

Rebekha thinks that Peter, with respect, may have misinterpreted what she said, or has attributed what Andrew Wilkie said in Parliament last Thursday to herself. Rebekha said "I didn’t say that about the Prime Minister".

She’s definitely not happy with the Prime Minister and she’s definitely told him that the situation in present times is making it become untenable. But she didn’t say that about the PM and she’s thinking that perhaps those words have been said by Andrew Wilkie and attributed to her.

Did the Government’s blanket refusal to stand down any Coalition MP’s affected by dual citizenship doubts – current or future – concern Rebekha, or affect her ongoing support in any way?

“Yes, it does concern her. [However] her position remains the same. The Government will do what’s it’s going to do. Rebekha doesn’t benefit, so her position doesn’t change. The fact Barnaby and Fiona will not stand aside from Cabinet will not affect Rebekha’s support at all.”

While Xenophon was reaffirming NXT’s support for the Government on Sunday, Attorney-General George Brandis was affirming that, based on the "legal advice he had received", no-one in the Government would stand aside unless or until the High Court ordered them to do so.

Matt Canavan had been wrong to stand aside, Guardian Australia reported Arthur Sinodinos as saying on Sunday, while Joyce and Nash were

"... right to keep voting in parliament until their eligibility was settled by the High Court."

Sharkie, however, does think Barnaby Joyce and Fiona Nash should step aside from their cabinet positions until the High Court rules on their eligibility:

"This is the position that was stated when Andrew Wilkie got up and spoke. They want Fiona Nash and Barnaby Joyce to step aside as senior Ministers. They can still vote and they still have the right to be in Parliament to represent their communities. But they just need to admit their position as senior ministers is just making them target practice for Labor, basically." 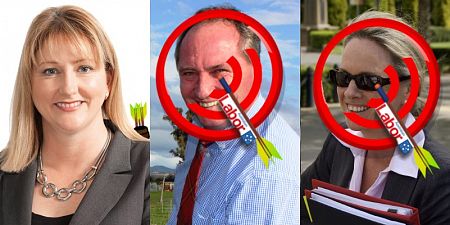 But even given NXT’s ongoing support for the Government, that still leaves the Coalition with only two crossbench votes if they are forced into minority government.

IA asked Rebekha’s advisor whether this placed her boss and Cathy McGowan in a powerful position.

“I don’t think Rebekha is interested in playing games. Question time is just a bit of a farce, the whole week question time was a farce.”

So, no split in NXT, just a concerned and frustrated MP.

As for the claim Sharkie had withdrawn support for the Government, this was more than just being "taken out of context" — it was, according to Ms Sharkie's advisor, downright false. IA has emailed Peter Hartcher for comment but, at time of publication, had not received a reply.

As for the other media, who so eagerly spread Fairfax's false claim without checking first with the source, they also deserve censure. They should know, better than anyone, that you can't believe everything you read in the papers — or online.

Looks like no crisis of no confidence after all. https://t.co/Qv3CUBap7w @australian by @rosieslewis

8 February 2020, 11:00am Chris Mordd Richards was present at the recent climate protest at Parliament House ...
Join the conversation
comments powered by Disqus
Daily news
Get FREE daily updates from IA to your inbox.
Just in
SHOP AT IA