Current and former elected officials with a focus on saving our planet have urged Joe Biden to join their cause in prioritising climate action, writes Jessica Corbett.

ON THE EVE of the global Youth Climate Action Day 2020, more than 125 young elected officials from throughout the United States signed on to an open letter urging President-elect Joe Biden to take bold, necessary action to protect communities across the country and beyond from the human-caused climate emergency.

Organised by Elected Officials to Protect America (EOPA), the letter explains that the signatories:

‘...believe it is imperative we take action on the climate crisis because it is a threat multiplier for water security, deadly disease and environmental racism. It is time to enact a national Climate Emergency Plan that protects all our communities.’

The letter comes as Biden is assembling his administration following an election that occurred in the midst of the deadly coronavirus pandemic and related economic fallout as well as a national uprising demanding racial justice — in addition to the ongoing climate emergency illuminated by a summer of devastating wildfires across the West Coast and a record-breaking Atlantic hurricane season. 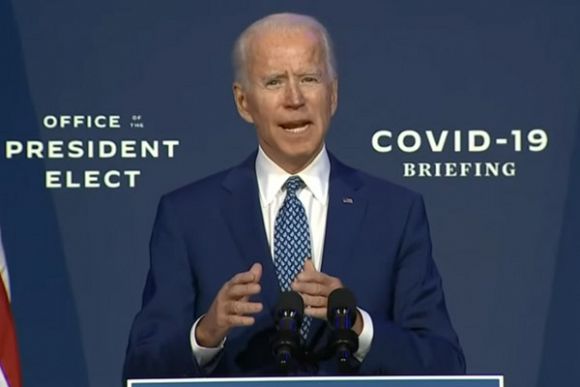 Although Biden won last month and Democrats held on to their majority in the House, party control of the Senate will be determined by a pair of runoff races in Georgia scheduled for 5 January. In a statement on Friday, EOPA president Alex Cornell du Houx said that “no matter how the Senate roll call turns out, President-elect Biden will need support for his clean energy economy agenda from elected officials across the country”.

Though some of Biden's selections and possible future picks for his incoming administration have alarmed climate activists in recent weeks, the former Vice President won progressive support ahead of his election in November by embracing a bolder vision for climate policy, including with a green energy plan unveiled in July.

“With President-elect Biden, we have the chance to attack the climate crisis, invest in green 21st-Century jobs and embrace the clean energy revolution our country, our young people, are crying out for.”

As Maxmin told Common Dreams after her victory:

“When I talk to folks, I mostly listen, I don't show up and talk about myself... I really try and listen and make sure that the voices that I hear are reflected in our campaign.”

Maxmin, who signed EOPA's letter, reiterated on Friday that her approach to politics involves engaging with and working for the people who elected her, explaining:

“I fight for my rural community and values, regardless of party or background. Our work is built on listening and mutual respect.”

“We're at a moment where we can either let our divisions tear us apart or bring us together,” noted the state Senator-elect, who is currently the youngest woman serving in the Maine House. “With the climate spiralling out of control, we have to work together for all our futures.”

The EOPA letter urges both Biden and the next Congress ‘to develop a federal Climate Emergency Plan that includes, but is not limited to, the following objectives:’

‘America must lead the world in protecting everyone from the climate emergency,’ the letter says, echoing a message from United Nations Secretary-General António Guterres earlier this week.

In an interview that preceded the release of two alarming U.N. climate reports, Guterres warned that “the way we are moving is a suicide” and humanity's survival hinges on the United States returning to the Paris Agreement and achieving net-zero carbon emissions by 2050. Though President Donald Trump officially ditched the global climate deal the day after this year's election, Biden has vowed to rejoin it — though experts and advocates have advised that's merely a starting point.

Young climate activists continue to push and support us to take steps towards a clean energy economy at the state level, but states can only do so much on our own. Having a president who understands the existential threat of climate change is critical, but he'll need the support of young climate activists and elected officials from every state in order to make the changes we need.

Young elected officials from all over the country are proposing legislation, passing laws, and standing up to fight [for] environmental justice so we can create an inclusive clean energy economy.

I'm also encouraged by the wave of young activists demanding climate action. There is no doubt that their momentum helped New York pass the Climate Leadership and Community Protection Act, putting us on a path to the future.

This article by Jessica Corbett was originally published on Common Dreams, under the title, ‘Ahead of Youth-Led Day of Action, Young Elected Officials Push Biden to Enact National Emergency Climate Plan’. It has been republished under a Creative Commons licence.