From economic bragging to denial of corruption, the Liberal Government has gained a reputation for bending the truth, writes John Wren.

THE INTERESTING THING about the pandemic is the way that it has exposed the political, economic and ideological failings of Australian society. This is not unique to Australia — it has done that in most countries it has ravaged.

In particular, it has brutally exposed the three big lies that the Liberal Party bases all its “policies” on. These lies are constantly reinforced by the Liberal Party’s media surrogates – the Murdoch, Stokes and Costello media cartel – to such an extent, that most Australians inherently now accept them as fact.

If you tell a lie big enough and keep repeating it, people will eventually come to believe it. The lie can be maintained only for such time as the State can shield the people from the political, economic and/or military consequences of the lie. It thus becomes vitally important for the State to use all of its powers to repress dissent, for the truth is the mortal enemy of the lie and thus by extension, the truth is the greatest enemy of the State.

The pandemic has now broken that shield and we see Prime Minister Scott Morrison, who has always had a problem with honesty and transparency, increasingly using “cabinet in confidence” and other means to restrict access to the truth. We have also seen secret trials of state whistleblowers and attacks on journalists who dare to expose the Government’s transgressions.

The first of these big lies is that the Liberal Party is made up of better financial stewards of the Australian economy than Labor. This has a variety of forms; “cleaning up Labor’s mess” is still a common refrain after eight years in government. Another is that taxes are always lower under the Liberal Party. This has the secondary implication, of course, that taxation is a bad thing. Another form is that surpluses are good and deficits are bad. All are nonsensical and don’t stand up to any real objective scrutiny.

The highest taxation levels Australia has ever experienced as a proportion of GDP happened under the John Howard regime in 2007. What was even more galling about that was Howard was not only taxing us at a high level, he was also selling off any public asset he could find in order to deliver a “surplus”. Never mind that that left a structural deficit that every government since has not been able to overcome. Privatisation of public assets is another of the three big lies I will cover later.

During the Global Financial Crisis, then Labor PM Kevin Rudd and Treasurer Wayne Swan navigated Australia’s economy so effectively that Australia was the only country in the OECD to not go into recession. Even now, a decade or so on, many people who lived through the GFC often deny it even happened as it had so little impact on them.

Like NZ Labour’s Jacinda Ardern’s response to the pandemic, the Rudd/Swann GFC response was to go early and go hard. It worked. Labor incurred some debt as a result of the approach, but it was necessary debt for the greater good. We also now know that the minor increase in debt has proven minute in comparison to that which the Liberal Party has inflicted on Australia both before the pandemic and after.

So embarrassed by the debt blow-outs, we even saw Treasurer Josh Frydenberg this week try to claim that his Liberal Government’s eye-watering debts are the result of the pandemic. Shadow Treasurer Labor’s Jim Chalmers firmly put him back in his box by pointing out that two-thirds of the debt was incurred before the pandemic even happened. Where has all that money gone, should be the real question. 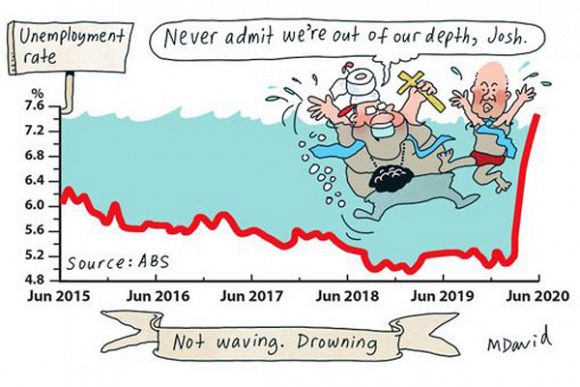 As much as the Morrison Government struggles towards recovery from the COVID-19 pandemic, the long-term outlook seems grim.

The second of these big lies is that private industry is always more efficient than the State when it comes to delivering services. Because the free-marketeers of the Liberal Party inherently believe this, they will always try to privatise whatever they can. Labor under Paul Keating was not immune to this, however the economic circumstances of Australia back then were very different. It is fair to say, though, that the bulk of privatisations have been at the behest of Liberal Federal and State governments.

The aged care sector was privatised under the Howard Liberal regime and the problems we now see exposed by the pandemic are a direct result of that. The Federal Government has an oversight role which, over the last couple of weeks, has been sadly exposed as grossly inadequate.

Aged care (in fact any healthcare) as a profit-making venture is inherently immoral. It means facility owners make the choice daily between their residents’ welfare and how much money they can pocket. This means that shortcuts will be made, standards of care such as food, accommodation and personal care will inevitably be compromised. As an aside, you won’t see the Stokes media (Channel 7 and the West Australian) reporting on this — Stokes has financial interests in the aged care sector.

Further, the casualisation of employment, itself a spin-off of the privatisation mantra, has exposed aged care facilities even further as infected, often poorly-trained aged care workers spread the virus from facility to facility (just as casual abattoir workers similarly spread the virus across multiple abattoirs and casual security guards did the same in their workplaces).

In Victoria, 99 per cent of COVID-19 cases have been in private (federally overseen) facilities. The State-run facilities have had virtually no cases. These are run by highly-trained staff, subject to appropriate staff-to-resident ratios with minimal casual employees. The results speak for themselves.

COVID-19 has lethally exposed the privatisation myth, but there are plenty of other examples — sky-high power prices are one example. Ballooning private health insurance premiums are another. Whether the private health sector even remains viable is under question at present.

And finally, the third big lie is that corruption is rifer within the Labor party than within the Liberal Party. One only has to look at the record of the Morrison Government on sports rorts, community development grants, Watergate, Angusgate, Paladin and many others to see that is just patently incorrect. The fact that the Liberal Government is continuing to fight against the need for a Federal ICAC to hold them to account is telling. If they have nothing to hide, and that Labor is “more corrupt” anyway, then why would they not create such an institution?

When public assets are privatised, they are often acquired by a Liberal Party donor. Clearly, there is significant capacity for corruption within this process. The question I asked rhetorically earlier about where has all the money borrowed by the Government actually gone is also a question worth pursuing.

The pandemic has exposed the fallacies of the three big Liberal Party lies in ways the Government could not have expected. Our compromised media has vacated the scene. Now is the time for the Opposition parties and independents to really hammer home the facts. The lies will crumble under proper scrutiny — they are the last bastion of our democracy.